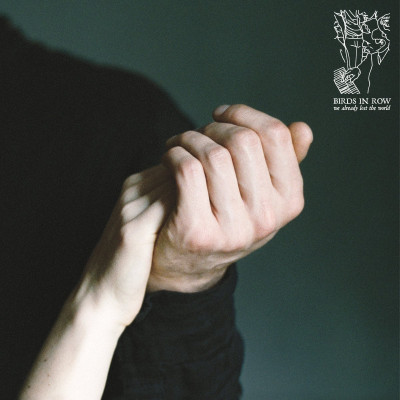 We Already Lost The World by Birds In Row

Hardcore is supposed to be abrasive. That’s what makes it hardcore. It is loud, aggressive and liable to make the majority of the population shake their heads and mutter something about a “bloody racket”. But it is also supposed to have a heart. Like the best nightclub bouncers, under the brawn, shouting and tattoos, it is supposed to have feelings – an understanding of the human condition.

Birds In Row have got it. Yes, they are extremely loud. They are also fast at times. And yes, there is a lot of screaming involved. And it goes without saying that as a band that calls itself hardcore and started in the French town of Laval – home of the excellently and aptly named Throatruiner Records – it has more than a soupcon of abrasiveness.

But amid the white heat of hardcore there are dark – or even multi-coloured – spots in this album, which is their second full-length (if you discount the excellent Collected omnibus of early EPs that came out on Throatruiner).

And it is great. From the visceral thump that introduces the opening track, ‘We Count So We Don’t have to Listen’ to the barrage that is ‘Fossils’, the final number, it is a heartfelt, if occasionally bleak, listen.

The band go by first initials alone and shun publicity shots, because they want to be regarded as a single entity rather than a trio of individuals. It is an under-rated ploy – it forces us to focus on the music rather than what band T-shirt the drummer may have chosen the day of the photo shoot. And what shines through every note is their passion for making gut-thumping music.

What we do know is that they had a line-up change from their previous album, You Me And the Violence, in the bass player (D was replaced by Q, if you must know). And apart from resulting in a six-year gap between albums, it has heralded a little restraint in some songs: this is not all screaming and distortion.

Evidence of such is in ‘We vs Us’ and ’15-38′, which are notable for clean singing and an almost poppy amount of melody. After the onslaught of their previous album (and the barrage of the opening track and ‘Love is Political’ here), these gear-changes are welcome – they provide slivers of light in between the darkness. And the extended ending to ‘Remember Us Better Than We Are’ is something else. As it meanders into a desert-parched fade, we almost forget that five minutes ago we were battered with noise.

The lyrical content is extremely personal, focusing mostly on people and relationships, with the occasional foray into political issues (which, let’s face it, are really about people as well). And the production is amazing: crisp and loud, without being overly compressed. Amaury Sauve, who has produced every Birds In Row album, should patent that drum sound – it would wake the dead.

As would the entire album; it is loud after all, just like a hardcore record should be. But it has a heart. Which is a rare and great thing.