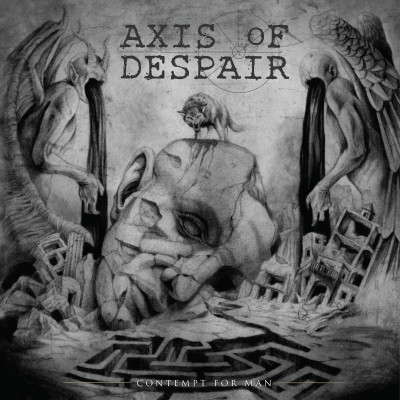 Contempt For Man by Axis Of Despair

Anyone looking for a collection of the fiercest and most intense grindcore this year and beyond can stop looking now and indulge themselves in Contempt For Man, the debut album from Axis Of Despair. The band feature members of Nasum and Coldworker amongst its ranks and this latest project sees them adding the same musical goodness as of those great grind bands while also adding a mixture of groove and a catchy nature into proceedings.

They follow up the EPs that introduced Axis Of Despair in Time And Again and Mankind Crawls with the album and this debut full length from the band follows in the same footsteps but amps up the grind in an even more berzerk fashion. Right as opening track ‘Vardelos’ blasts into life, Contempt For Man is a pulverising experience, relentless in its quest for aural battery (a quest for which it certainly succeeds). The entire album is an nonstop collection of grind madness that only really relents as concluding track, ‘Flytande Dod’ with its grooving heaviness fades out with the triumphant and satisfying sound of feedback, confident that what has preceded it has done its job in terms of terrorizing the listeners eardrums in the best way possible.

Razor sharp riffs and perfect blastbeats collide throughout as Axis Of Despair follow in the footsteps of heroes Napalm Death, Terrorizer and Repulsion and continue the grind legacy of their previous bands with tracks like ‘The Wolven Law’, ‘The Punishmnet Begins’, ‘The Pain Maze’ and ‘Pre-Emotive Nuclear Strike’ as pummeling as their titles suggest while penultimate track ‘A Brutal Truth’ is as unhinged as anything by its namesake band.

The twenty tracks on here fly by in a storm of grind fury and the manic energy on display is contagious. It has to be said that it is certain that you won’t find another album with as much power intensity for the rest of the year and if you have a passion for grindcore, then your album of the year is right here.