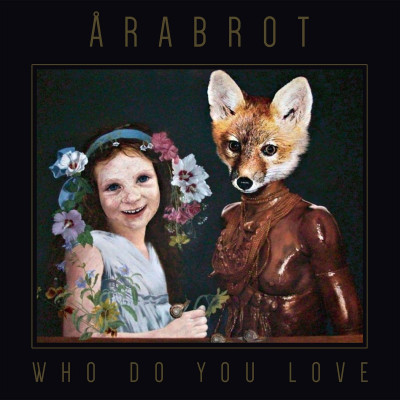 Who Do You Love by Årabrot

Who Do You Love is the long awaited follow up to 2015’s The Gospel, which was a big deal for Norwegian noise rockers Årabrot in several respects – it marked main man Kjetil Nernes return after battling throat cancer, a softening of the band’s sound and perhaps, uncoincidentally, a much greater and wider critical acclaim. Who Do You Love sees the band move further into their self-proclaimed “true Norwegian art-rock” direction and was recorded in the bands new HQ – a former church in a remote part of Sweden. All this lead me to be mildly daunted approaching this release, I wondered if it would be a dry, high brow effort, one to please the Saturday supplements, but not much fun for the casual listener, which I very much was upon receiving this album.

The character Maldoror, the protagonist in the French novel Les Chansons de Maldoror, is an important figure on this album, his evil and twisted outlook, taken as a type of love, is an overriding theme. Thankfully, it’s not a overbearing concept with a stifling intellectual hurdle to overcome in order to enjoy the songs. I guess you can just rock out to it, but it offers up many dark and mysterious treasures to the committed listener.

In fact, the early numbers are sort of blackened but recognisable rock n roll. The fantastic opener, ‘Maldoror’s Love’ – exists within the same blues-based rock as Led Zep, whilst simultaneously dwelling in a much darker, stranger corner of its nether worlds. Its glam chug and stabbing keys suggest a clammy union of T-Rex and Grinderman, surprisingly, with Nernes’ love of classic rock much more evident than ever before. The following two numbers ‘The Dome’ and ‘Warning’ pile on further arty, arch and waspish layers, with Faith No More, Franz Ferdinand (!), Nine Inch Nails and GNOD all recalled, and still furrowing that four-to-the-floor rock n roll orthodoxy.

It’s at ‘Pygmalion’ and the later ‘Sons and Daughters’ where the old, weird, religious vibe manifests itself and Årabrot become something else, something approaching ethereal and romantic – cold and damaged, sure, but there’s beauty too. Something not a million miles away from Nick Cave and The Bad Seeds. And in the reverence and swell of church organ of ‘Pygmalion’ lies more than a glimpse of the gothic horror of Anna Von Hausswolf’s latest album. Lead vocals on both songs are taken by Karin Park, Nernes’ wife, and band’s synth player, whose voice is strong and pure, but with a tremulous, emotional edge that adds a vulnerability to Årabrot’s default pathological, warped conviction.

A startling, martial, stentorian retooling of Nina Simone’s ‘Sinnerman’ and a brief sample ‘Serpents’ add to the old time religion vibes before the rest of the album returns to slightly less obviously Biblical fare. However, ‘Look Daggers’, with its apocalyptic hollering, huge thumping drums and dramatic keys is no less weighty. It’s about the heaviest thing here and I have to admit may be one of most satisfying tracks – probably because it sounds like Tom Waits meets The Bad Seeds (them again) and gets closest to the hardcore rage of their Solar Anus album, which I went back and discovered off the back of this record. Themes of love, hate, faith and war are never far away, although everything is shrouded in metaphor and probably only Nernes will ever know the true significance of most of the lyrics. Exactly what is meant by the fishy fable ‘A Sacrifice’ where a serpent God is offered a young girls life is particularly intriguing, as is the closing ‘Uniform of a Killer’ where everything appears to be linked to a death, and leaves you unsure of everything except impending doom. Sonically it’s fantastically rich with deranged, wonky church bells that swell at the end a particularly nice touch.

Who Do You Love is a diverse and rewarding listen, albeit a rather gloomy one, which I find I’m not always in the mood for, but it’s undoubtedly the work of real artists with interesting ways of expressing themselves. Årabrot are a very welcome counterbalance to meat and potatoes hard rock acts with nothing to say and the desire to keep saying it blandly. It’s good to have them around, but I wouldn’t exactly call it fun.