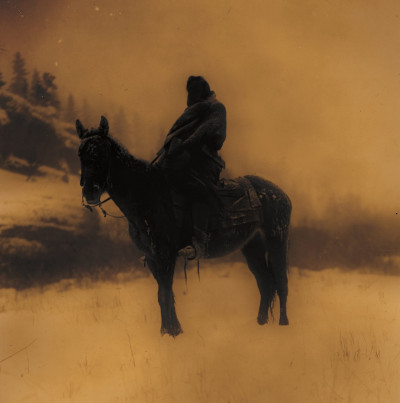 I am still trying to come to terms with what just happened after I pressed play on the third album by Denver’s Wayfarer. I was ripped from reality and placed back in the 1880’s, suddenly I could smell the plains of America and taste the sand and dust filling my lungs as my body was pummelled from riding in a rickety horse and carriage. From the go World’s Blood takes you on an adventure, imagine Little House On The Prairie through a black metal filter and you start to get on the right path.

From 1845 Manifest Destiny and various gold rushes spread the populace of North America from the east coast to the west coast and there are many highs and lows of moving such a great distance with horse power being the grandest form of transportation. Wayfarer has managed to create an album that makes you feel like you are there on that voyage. Opening track ‘Animal Crown’ captures the sense of excitement of the new undertaking with its pounding rhythm led by the drums and wrapped in a rustic, metallic riff that breaks with a heavy twang in between thrusting strums. It is very catchy, a perfect opener and one that you will keep on going back to. Yet even in this track you can begin to hear the creaks of discontent setting in and the following tracks traverse the many hurdles such a journey can produce.

The overall label for the release is black metal but it is worked so brilliantly that it is never the overbearing theme and appears in flourishes. No two tracks follow the same structure or pattern yet the atmosphere on the album is very consistent. After ‘Animal Crown’ the music sits back a bit which leaves space for a wonderful atmosphere with rich reverb to build in the gap before the deep ferocious vocals descend. On ‘The Dreaming Plain’ and ‘On Horseback They Carried Thunder’ there are outbreaks of blast beats and tremolo guitar that draw you back to black metal but ‘The Crows Ahead Cry War’ has a far more progressive feel to it and swings around the foot stomping beat of the opening track.

There is just such an ease to this album which creates a meaningful theme rather than a forced concept album. The tonality and little touches always manage to drawback to the feeling of western expansion. Little drum rolls and percussion mix with slightly metallic guitar rings, space and great production to take the listener with the band and its wagon on its mission. This is truly a cracking piece of work and is sure to stand the test of time due to its originality, it is rare to find new leaders but Wayfarer proves it is still possible to be unique.