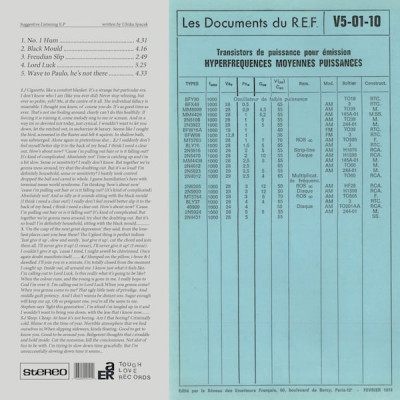 Ulrika Spacek is a somewhat mysterious 5-piece from London who created Suggestive Listening for Record Store Day 2018. They inhabit a space in indie rock that suggests repeated listens to Pavement, Yo La Tengo, and the Velvet Underground.

Their smooth, deceptively minimalist and vintage sound is enticing and just edgy enough to avoid vanilla milkshake comparisons. I mean that as a compliment, for it’s so easy for bands to become complacent. Instead, they offer gems like the opener, ‘No. 1 Hum’, which goes down easy enough, but as it rumbles along, you realize how much is happening beneath the surface. It is both blissful and melancholy in spots, and all of it is enticing.’

‘Black Mould’ reminds me of Grizzly Bear, sliding past my ears with an amiable bent, keyboards offering a droning backdrop to some sparkling guitar. Nice! ‘Freudian Slip’ unfolds as a bit of noodling with some trippy instrumental breaks and hushed vocals, again invoking Grizzly Bear. Its quirkiness is what keeps me interested.

‘Lord Luck’ is another unconventional tune, with fuzzy guitar and slightly warped vocals. At times, the tune meanders into the background and takes on a bit of Mew, who are noted for quick changes in tempo. ‘Wave to Paulo, he’s not there’ is the final track, and it’s charm is its lo-fi ambience.

Taken as a whole, it’s a cool interlude between albums, and one worth hearing for existing fans and new fans that follow the bands named here.