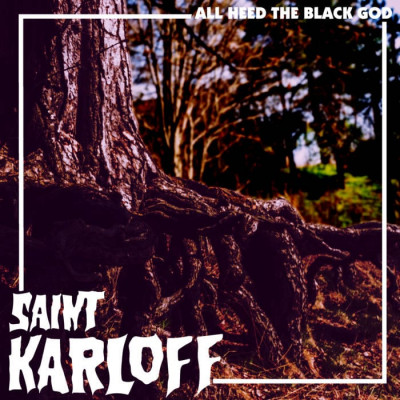 All Heed The Black God by Saint Karloff

“Dead children stuck in the abyss of my mind”, and so after an opening of thunder, crows cawing, and a foreboding riff, we are thrust straight into the remit of Saint Karloff. Don’t run off too soon though, as although the obvious generic doom template is there, and lets be honest about this, the ghost of Black Sabbath, this band have a lot more up their sleeve than you would expect.

Denizens of a sound built on late night horror movies, and copious amounts of weed. Norwegian band Saint Karloff may hold a candle to their peers and influences, but on the outer rims there is also a broader understanding of music in general, with the progressive heaviness of Motorpsycho playing a part in their unravelling of melodies. Whilst they remain far apart in terms of expertise with that band, they do take a keen sense of energetic experimentation with them, and within that, a pervasive ear for melody.

It’s the melodic aspect which pulls you in to this album, and you sense it right through opening track ‘Ghost Smoker’. They do heavy too, as we find on the explosive crunch of ‘Space Junkie’, which unravels its chaos, burning a giant pot hole in your mind as they reach for some kind of lift off. If the acoustics of ‘Ganymedes’ didn’t come next, you would genuinely fear for the band careening out of control somewhere. Where some bands would just carry on with a vibe, Saint Karloff like to play around, and their music is so much better for it.

‘Dark Sun’ may sound like a casual little doom number but behind the surface are some rather lovely harmonies which embody a classic 70’s rock feel to it. It sounds unusual for a band of such heavy intensity to veer towards the FM airways, but we forget that those very same stations were playing a broad church of sound. Those sounds would evolve and amalgamate, only to get lost along the way by a more brutal attack on the sense as first punk and then metal would tear themselves away from anything slightly melodic for a while. Doom would be a victim in more ways than one.

‘Radioactive Tomb’ plays well to the bands sound with the first half being a held together by galloping drums overlaid by harmonies. Its slow build leads us into a brief ambient interlude before exploding in finesse for one final gasp. In truth, that last minute kind of leaves us on a downer with the song as the first four minutes are so good, but it’s only a minor quibble. There’s more music to get on with as the riff heavy ‘When The Earth Cracks Open’ brings the full book of doom to the table. Standard fare, but fun just the same.

Finishing with the now standard epic track, ‘Spellburn’ takes everything the band have brought to us, and wraps it up in one long package. It brings us to the close of an album, which within its circles, is pretty enjoyable. Whilst the riffs and vocals may be obviously culled from other bands (well, one in particular), they have a great sense of melody and an eagerness to introduce new elements. One of those elements, which almost passes you by at first, is the Beatle-esque psychedelic moment during the last song. It’s one of those blink and you’ll miss it moments though, as they head off on another galloping riff. Still, there is much to love here, and they offer something different from a doom scene which has gone increasingly heavier. A welcome return to a classic 70’s sound.