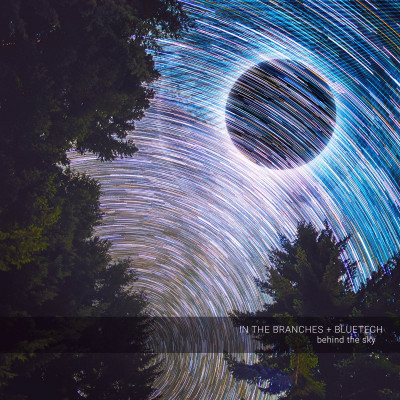 Behind the Sky by In the Branches + Bluetech

First, I should point out that I’m generally not the biggest fan of ambient music. Too much of it seems to me to be either dumbass yoga music or just a general cop-out on musicianship. That said, I have liked ambient techno, mostly because it typically comes with a pulse that my subconscious can anchor to. I also like a lot of drone music, although again, tend to gravitate to the kind with a pulse, the kind that reminds me of my beloved washing machine.

Behind the Sky by In the Branches and Bluetech is neither yoga music, nor ambient techno. I’d describe it more as space ambient. Let’s say that you are in a spaceship passing through the cosmos, safe from absolute zero temperatures outside, in comfortable seat with perfect earthlike gravity, oxygen to breath, a Romulan ale in hand and a working toilet nearby, gazing at gorgeous colored gas clouds fantastic planets through a giant window – this is the music to go with that trip. Or at least so it seems at first.

The album is essentially the result of a JV between In the Branches, a guitar-based ambient project of Shane Cotee and Bluetech, AKA Evan Bartholomew, a popular San Diego DJ best known for deep and ambient house music (as well as awesome ear gauges!). The result, however, is something that is quite different from either men’s solo work. While the music of In the Branches is organic, warm and analog sounding, Behind the Sky is pretty consistently icy and digital. And since Bluetech’s deep house also generally warm, I can only assume that this low temperature sensibility was by design, given the subject matter of the album. The cold, brittle quality makes for a perfect complement to the airy ethereal sense of distant travel to places not necessarily understandable or contextual to the human mind. I keep thinking of the film “Interstellar” as I listen.

The music takes a while to unravel, each movement lasting between six and twelve minutes. But there is enough incremental layering and themes emerging and receding that it’s not a boring record, even when listening with full attention. The record hits its stride on the second track ‘Opening In Time’, which almost borders on IDM, with disparate arpeggios creating a fantastic textures. From there, the journey alternates between subtle and incremental pads shifting slowly like tectonic plates and the melodic soundmatter on top, some of which is intimate and friendly, some caustic, distant, dangerous.

While the record generally evokes a peaceful chill vibe, the full sense of well being never lasts very long. There is definitely a haunting sense here, a feeling that all the beauty of space is untouchable and can only be observed from the safety of one’s bubble, without which you’d surely die. Therein lies my favorite aspect of the album – its ability to straddle beauty and awe with a sense of danger. After all, deep space is absolutely inhospitable despite how pretty it may look in long range pictures or on episodes of sifi shows. Then again, maybe that’s just me projecting.

Overall, I like this record a lot. I found it to be a very good complement to the computer work that, alas, constitutes most of my day. It is, thus, exactly what it’s supposed to be, music that straddles the subconscious, in the background, but is just forward enough to help improve your day.