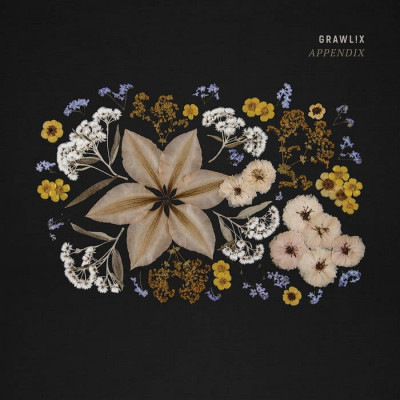 A long time ago, in a galaxy far, far away, multi instrumentalist and filmmaker James Machin could be found tearing his young heart out in My Psychoanalyst and drenching their rousing group choruses with his signature soaring reverbs. Since those heady days amidst Derby’s smouldering music scene, the man behind Grawl!x has gone on to produce some truly compelling music, art work and film. The synergy of these visual and audio art forms has naturally informed his solo project, giving it a strong sense of identity and adding to it’s already burgeoning uniqueness. Slight comparisons can be drawn between acts such as Bon Iver and Nils Frahm as Grawl!x builds his footings in the realms of the singer-songwriter and ambient soundscaper but he twists the conventional instrumentation and infuses it with innovative performance techniques, cinematic sensibilities and aspects of electronic production.

Consolidating his trilogy of grief, Machin returns in 2018 with Appendix, his third studio offering and first release on the quietly formidable Reckless Yes Records. This latest foray into the Folktronica scene, boasts ten neatly packed compositions that twinkle and blaze in equal measure. It’s safe to say that Appendix is arguably the most refined version of that quintessential ‘Grawl!x sound’ to date.

The second track, (part of an opening couplet of title tracks called ‘Appendix A’ and ‘Appendix B’) is the first ‘song’ in the traditional sense of the word and sets a melodic president with its lingering melody and bares some of the hallmarks of Machin’s signature sound; reverb-drenched vocals and a driving rhythm of highly compressed acoustic drums that pound and crash beneath an otherwise tender backdrop. Standout track The Moment’s Gone is a gorgeous Iron & Wine-esque acoustic ditty that simply oozes sentiment and hangs somewhere between a wistful lamentation and hopeful optimism. It also features the vocal talents of Derby-based Shelly ‘Sex Jokes’ Jane Newman. The album benefits from several air-tight collaborations: Fellow Derbyshire folktronica outfit Haiku Salut pepper the songs with accordion, vibraphone and trumpet, bringing even more variety to the rich instrumentation. Don’t Do It to Yourself yields flavours of Broken Social Scene, with Danielle Cotterill of Pet Crow bringing a fully Feist-like vocal performance to this fantastic slow burner of a record. The rolling refrain tumbles into the string-laden Trawpse which could sit quite comfortably on a release by Bright Eyes perhaps, with the flamboyant sway of its string section. The string arrangements themselves are the result of yet another collaborative process with TV and Film composer Richard J. Birkin, who’s arrangements weave in and around the album’s piano driven essence like illustrious vines on an ancient building.

In this sense, it’s fitting that Machin has performed this exquisitely cinematic oeuvre in a handful of gothic settings such as Derby Cathedral and the Union Chapel in Islington. It’s hard to imagine the performance being at home anywhere else. But Machin’s afore-mentioned background in visual media suffuse with this release in many ways: The release also acts as a soundtrack to the short film, Fleeting. Written and directed by Machin himself, the narrative and aesthetic go hand-in-hand with the lyrical themes and ambiance that permeates the album. This synergy of sight and sound testifies to Machin’s multifaceted approach to his art. A jack of many trades and sickeningly masterful with them all.

Grawl!x is due to feature on a couple of exciting festival lineups this year, including Timber festival and Bearded Theory. These follow exciting shows alongside the likes of Brighton-based, ambient-ish two-piece VLMA and even some well-deserved radio play on BBC Introducing.

Be sure to catch the spectacle in person or check one of the many live videos available online. In the meantime, this beautiful recording is available on vinyl and digital download from Bandcamp and Reckless Yes Recordings.