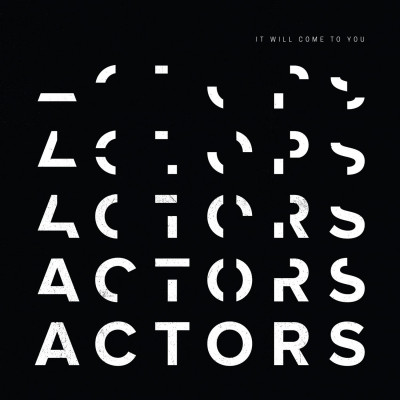 It Will Come To You by ACTORS

ACTORS is a post punk project from Vancouver, led by Jason Corbett, who manage to throw down dark, throbbing retro tunes with a modern spin. Imagine The Sisters of Mercy crossed with The Cure and any other favorite post punk group, including even lesser known lights of the scene such as early Comsat Angels and you start to get an inkling of what to expect here. They throw in icy synth pop and dense electronica, and manage to keep it real throughout. The songs are catchy and fun and despite the gloomy ambience, you can sing along with such cool tunes as the hook-filled ‘Face Meets Glass’, or the spooky ‘L’appel du Vide’, with its classic, metronomic beat. ‘Slaves’ is another treat, and a faint whiff of Bowie emanates from its grooves.

‘Hit to the Head’ could have been lifted from any classic synth pop record from the late 80s. It is rather like the work of LA’s Drab Majesty, an act who knows how to mash up the modern with the vintage. Cool! ‘Crosses’ is dead slow and mesmerizing in its twilight miasma. I am not sure if Jason or someone else is singing the high notes here. It dovetails nicely with perfectly manicured keyboard swashes. It’s like a horror soundtrack to a movie not yet made.

‘Bury Me’ creeps closer to the spacey psych of The Horrors, another known influence of the band. Once again, I am also reminded of Bowie in the vocals, but that might just be me. ‘Crystal’ is flat out great, and it screams single to me. With deadpan vocals, tightly wound synth and percussion lines, chilly synths, and a catchy melody, it seems primed for airplay or action on the dance floor.

‘We Don’t Have to Dance’ is in a similar vein, and I hear snatches of OMD on this one. In fact, I reckon this would have worked perfectly in a John Hughes film. ‘Bird in Hand’ is the album’s coda, a discordant and creepy instrumental with walls of droning fuzz. It makes good use of modern production and you may want to keep the lights on while listening.

To summarize, if you like any of the aforementioned bands or genres, you should make it your business to check this album out. One of the better post punk releases I have heard this year.