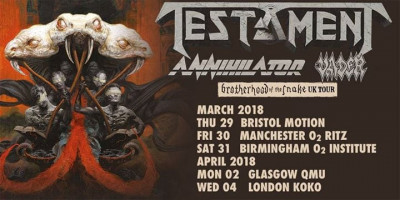 One of the most anticipated tours of early 2018 headed to Manchester as thrash legends Testament brought their ‘Brotherhood Of The Snake’ tour to the UK and with it a equally impressive line-up of supports in the shape of Canadian veterans Annihilator and Polish death metal gods Vader. Such was the excitement for this show, the Ritz was sold out and there was an impressive queue outside the venue well before doors opened.

Vader’s early stage time (due to the early finish because of the club night after the show) didn’t seem to put anyone off and they took to the stage at 6 pm and blasted through half an hour of primitive and brutal old-school death metal. Though the scene they came from may have changed significantly over the years, they have soldiered on with a singular vision that has served them well through a consistently impressive catalogue; and this live shows takes us right back to the early days with four tracks from their classic The Ultimate Incantation debut, with the double hit of ‘Dark Age’ and ‘The Crucified Ones’ the standout tracks from a set which laid down a very high standard for the others to follow. Because of the way they blasted through their set, it all seemed over too quickly, and it wasn’t long before they were being accompanied off the stage to the ‘Imperial March’ from Star Wars. 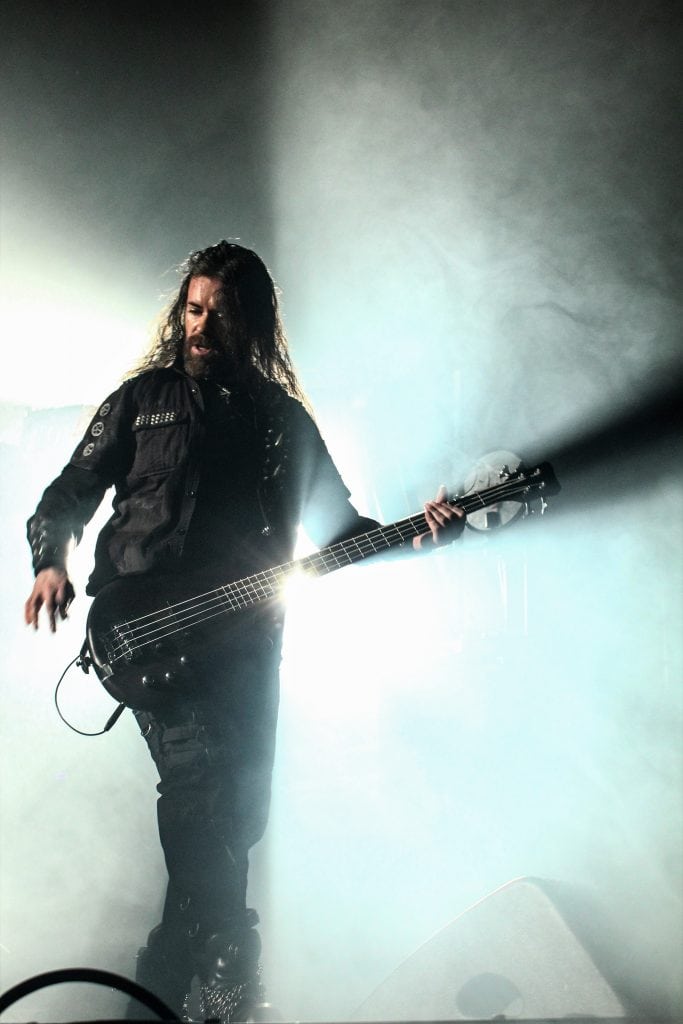 Next up were Annihilator, led by Jeff Waters, and they ramped up the energy and provided a totally different, but equally good, experience to the openers. Waters led them through a 45-minute combination of furious thrash and some lighter moments with his between-song banter with the crowd. Only time for a couple of new tracks from last years For The Demented, but those newer tracks blended in well to a nine-song set that drew from no less than six different albums. An often underrated band, they proved tonight that they were every bit as good as some of the more celebrated names in the scene, with “King of The Kill’ and ‘Phantasmagoria’ particular highlights of a great set. Hope it’s not too long before we see them over here for some headline shows. 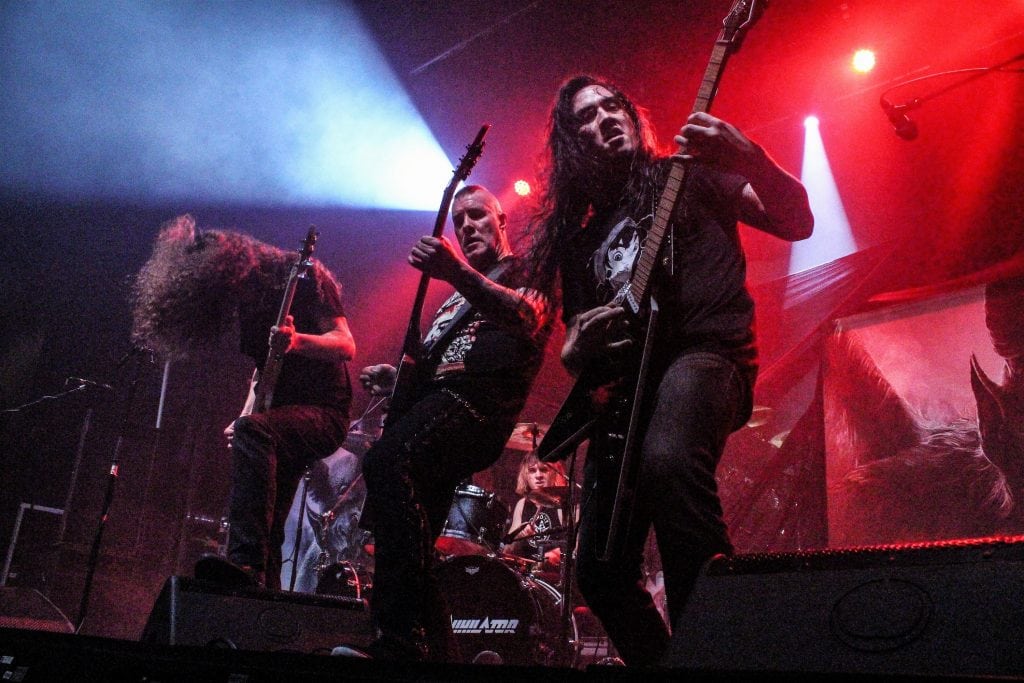 Testament had the kind of stage set that is demanded by big name thrash acts these days. A huge amount of lights added seemingly wherever there was space for any, as well as the large pentagrams adorning the top of each speaker stack. The extra lights added a full-on visual assault to match the aural attack coming from the stage. Opening with the title track from their latest album, they raced through five flawless songs that got the place absolutely bouncing, before lead guitarist Alex Skolnik lead us through the first solo of the evening. After the band came back on stage they smashed through another few tracks including ‘Low’ and ‘Into The Pit’ which got the obligatory circle-pit going, and the show was for the most part up there with anything I’ve seen over for a fair few years. The band were on great form, the crowd were lapping it up, and the connection grew stronger as the show went on. 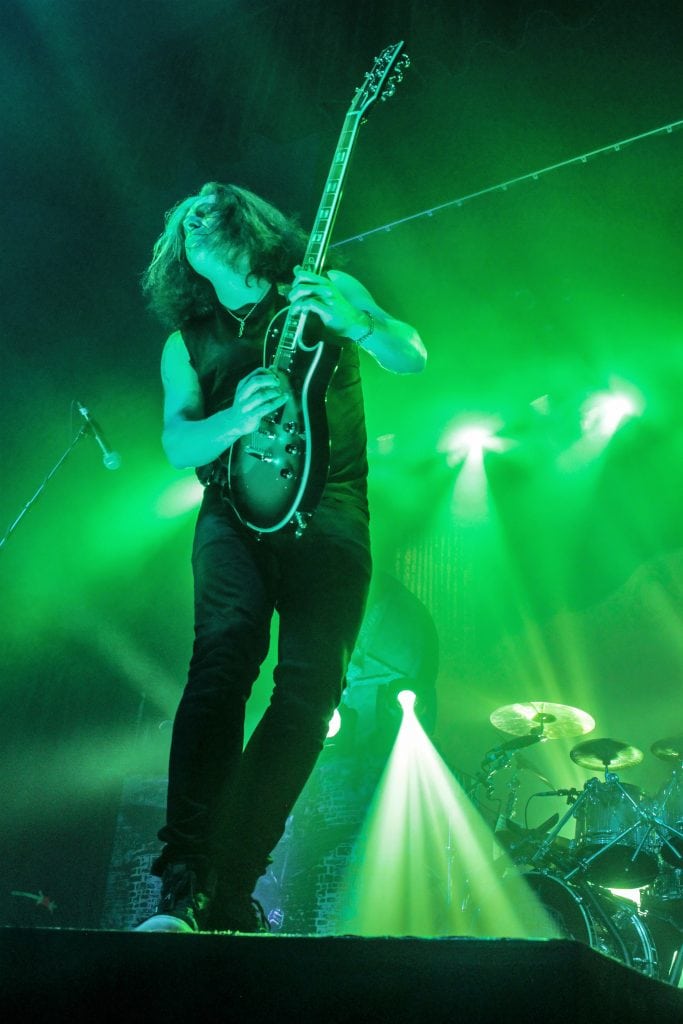 If there was a downside, it was the number of solos. Each member of the band is an incredible musician, and it’s a privilege to see the likes of Gene Hogan let loose; but four solos in one set seemed to drag a little from the middle of the set onwards. Alex’s was early in the set but the other three came in a song-solo-song-solo pattern, which really broke up the flow of what was an otherwise brilliant set. A couple of extra songs in there would have made a quality night even better. Saying that, once bassist Steve DiGiorgio’s solo was finished, the last few tracks took the energy right back up to where it had been earlier. It may have been frustrating in parts, for a short time, but on the whole it was a top band performing at the highest of levels. A great show from three great bands. 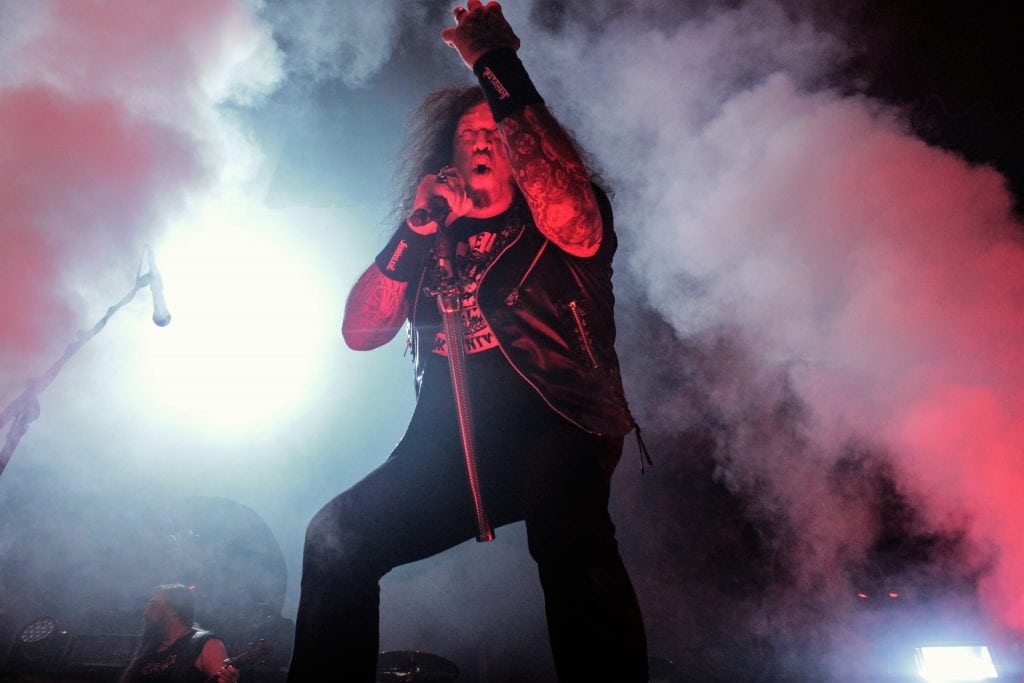 King Of The Kill – One To Kill – No Way Out – Set The World On Fire – Twisted Lobotomy – W.T.Y.D. – Alison Hell – Phantasmagoria