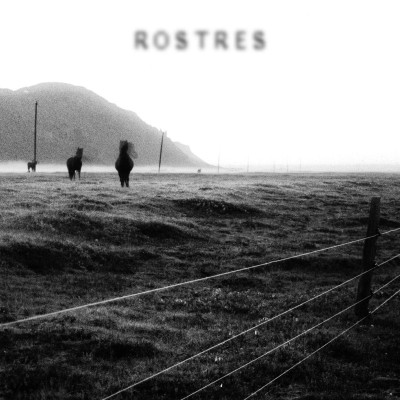 It seems that the Pyrenees Mountains may have played a large part in influencing the music of French duo Rostre on debut release Les Corps Flottants. Hailing from Pau in Southern France, the town rests at the foot of the vast range which acts as a physical border between France and Spain. The seven tracks display a brooding style of post-rock that traverses smooth still mountainous ponds as well as throwing itself off steep peaks into the heavier side of the genre. At first it can be hard to make the climb but if given time this is a very rewarding listen; this isn’t generic music served to you on a platter, it makes you think to find it’s true beauty.

Rostre doesn’t follow the traditional post-rock build and crescendo patterns instead going for a focus on a dark thunderous atmosphere. If you allow yourself to be taken by the music you get a real sense of the environment of the mountains. Opener ‘Les Corps Flottants’ has a rich texture in the ringing guitar and warm crashing cymbals yet the result is a forbearing gloomy track. The first half of the album also seems to be a climb with moments of release as shown in both ‘Exorde’ and ‘Méandres’. It feels like a beaten up old car which made easy work of the rest of the flat French countryside but is now struggling to carry the weight of the music over the first incline. As the car reaches a plateau it is able to open up once more and release some extra power. The music really carries a feeling of space throughout, from its quieter moments to the thunderous, just as you would expect when in the Pyrenees.

Celebrating life on the plateau is mid-point ‘118’, which has a real feeling of recent pg.lost to it. Although it is glorious in its simplicity and beauty it feels as though the song could have been given more room to grow and so can come across like a bit of filler when considered in the scope of the album. As the weather in the mountains rapidly changes so too does the musical atmosphere. ‘Glaire’ opens with a thunderous riff which feels like the dark clouds rolling over before it breaks down to a brooding movement before kicking off again. In a similar way album closer ‘Déversoir’ hits hard but keeps the harsh guitar progressions up throughout the entirety of the song, certainly a great way to end the album.

It may take a few listens to really reach into the music but that becomes the strength of it. This isn’t a record that will just be played a couple of times and forgotten about. I have no doubt there will be a time in the future when I am traversing a mountainous region with drastically changing landscape and be taken back to the tracks on this debut. Sometimes reaping the rewards of music is simple and instant and that is also true here; but if you allow the time to truly explore the music and allow it to surround you the results are even more stunning.