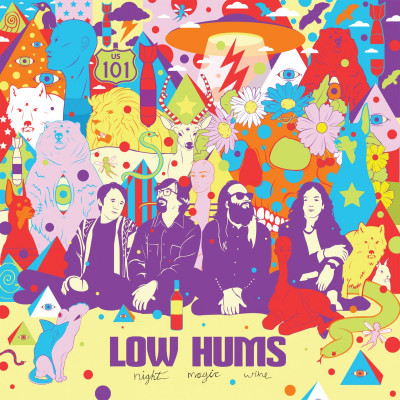 This is music for listening to in an old convertible, cruising down a coastal road while mid-morning spring sun glints off the ocean. On the face of it, this album sparkles with the enthusiasm of youth, of optimism and hope. It is an album to forget the world’s problems and just, to borrow the opening lyric of ‘Too Early to Tell’, “Lay down, down out in the sun.”

The band have been around since 2009 and this is their fourth release. We also get their third one as a bonus EP to this album – more on that later – and I have to confess I haven’t heard any of their previous work, but Night Magic Wine sounds like a band who have found their voice.

It begins with ‘In the Spin’, a happy sounding ditty with a clear-eyed riff straight out of the 1960s. Midway through, the song delves into a brief psychedelic interlude, showcasing what is up ahead.

And up ahead are 10 songs which are mostly happy – although some, such as ‘Song About Fleet’ or the trippy instrumental ‘Goblin King’ are weighed down with an undercurrent of gloom – occasionally heavy, and in a tempo ripe for the time and mood when the second coffee has taken effect and you’re ready to take on the planet. Listen to the album’s closer, ‘Sunflower of Doom’ for evidence of this.

The album was mostly recorded live, with the first or second takes being used in most instances. The glossy, shiny sound, largely free of additional trickery, was aided by the skill of Jack Endino, the man behind many seminal Seattle records like Nirvana’s Bleach. The guitars, high on midrange and occasionally sprinkled with vibrato, shimmer throughout. The drums crack, the tambourine (yes, tambourine – it is that sort of album) adds a little more Summer of Love magic and the bass holds it all together while keeping out of the limelight. And Sanoj Sniksah’s vocals have a fragile element to suggest that however sunny it may be, clouds will inevitably come. But not today.

As well as these 10 songs, we are also treated to a four-song bonus EP, Shine Rock, recorded in August 2016. And it contains one of the best songs from the band in the title track, a swirling blues jam drenched in British Invasion-style psychedelia.

The rest of it sounds heavily influenced by the Sixties, as well as a sprinkling of Southern rock. It is a good companion to the main album, but also gives an indication how much the band have grown since.

Right. Enough chit chat. I am off to buy a 1967 Mustang. One with a soft roof and a decent stereo, of course. Then I am going to drive it somewhere warm and coastal.