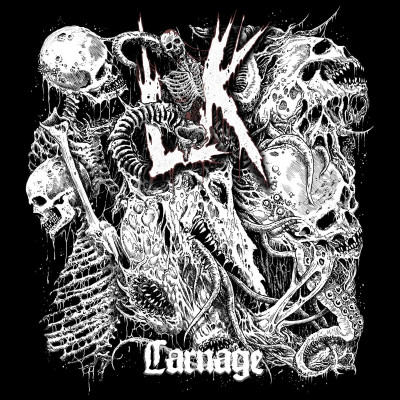 There are times that only death metal will do.

And – at the risk of sounding like a coffee commercial from the 1970s, when the situation calls for death metal, Carnage is the ideal accompaniment. The second album from this Swedish trio has all the ingredients that make up a great death metal album. It has relentless brutality, gory lyrics, a hefty dose of humour (c’mon, try and roar “Burning sensation, torment cock devastation” with a straight face) and – this is most important – mammoth hooks and breakdowns that any hardcore band would be proud to call their own.

There will be some who may argue that this may not even constitute a death metal album, as we know the genre in the 21st century – after all, amid the blast beats and super-fast riffery, there lies some melody (relatively speaking, of course – we ain’t talking close harmonies here) and some neck-wrecking groove. But as someone who grew up revelling in the hooks of ancient Cannibal Corpse and being a little too timid to endure an entire Broken Hope album in one sitting, it is the perfect balance of brute force and, dare I say it, variety. If I was 16 again, this would probably be my favourite album ever.

Take the opening track, ‘To Kill’. You can imagine an entire stadium of fists raised while a baying mob of metalheads roar along to the chorus, “I was born to kill, a freak unleashed.” It would be quite a sight. Disturbing, yes – but that is what death metal is supposed to be like.

And the subject matter of the songs are unashamedly gross, which is probably to be expected from a band called Corpse (which Lik is Swedish for). Indiscriminate horror and violence are depicted from start to finish – and we can hear almost every word, which is a welcome departure from the unintelligible Cookie-Monster vocals that is rife in death these days. And it is worth pointing out that the episodes of gore depicted do not stray into the misogynistic glee that permeates this genre all too often. This band are equal-opportunities blood-splatterers.

Indeed, ‘Dr Duschanka’ brings to life a painful bout of a venereal disease (hence the “burning sensation…” lyrics mentioned above). And the protagonist in the mid-tempo ‘The Deranged’ never reveals who (or what) he is defiling as he proudly shouts about being a “molesting, raping, killing machine”.

Sure it is far from pleasant, but – I repeat – this is death metal. And at least the screams of bloody gore (see what I did there?) are non-specific.

The album’s influences lie firmly in death metal’s golden age, of the early 1990s. And to those who miss the hardcore touches, mid-tempo breakdowns, pummelling blast beats and hilarious grossness of those halcyon days, this is a welcome arrival. When only death metal will do, this album will do nicely.