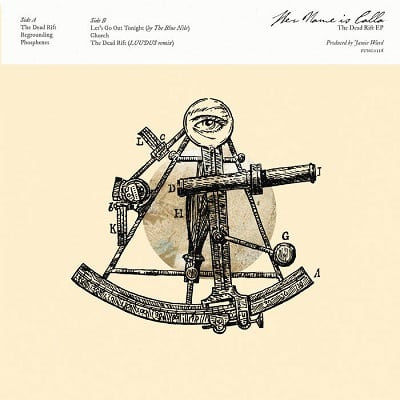 The Dead Rift by Her Name is Calla

After being together for over 10 years and releasing many albums, eps and singles during this time, including touring extensively, this hard-working band from Leeds is still going strong. On June 15th, 2018, Her Name is Calla are set to release their latest EP – The Dead Rift via Function Records. Digitally, this album is made up of 5 tracks, one of which is a Luudus remix of the title track, ‘The Dead Rift’. However, if one purchases the release in vinyl format, you receive a bonus track, more on that later.

The album on whole is a beautiful arrangement of melancholia and atmospheric soundscapes. For those new to Her Name Is Calla, the EP is not what you typically think of when you think of post-rock in general but it definitely is typical of what fans have come to love of the band’s unique sound. A mix of post-rock, folk and theatrical rock made possible by Tom Morris’ powerful and emotive vocals and beautifully arranged strings.

The EP starts with the hard-hitting title track, ‘The Dead Rift’. This track may be hard-hitting but also melodic at the same time. Tom Morris surprises at the 1:34 mark. I love what he does and it really was perfectly placed. I wait for it each time I listen to the track. This track has a mix of all the genres I mentioned earlier, reaching its theatrical epic thrill three-quarters of the way in.

The band then slows things down for the rest of the album with hints of folk and introspection. In ‘Regrounding’, Morris shines on vocals. The lyrics are beautiful as well. The strings really set the stage on this track.

The track ‘Phosphenes’ is a beautiful instrumental track. Using both emotive piano and melancholic strings.

The track that follows on my playlist, ‘Let’s go out tonight’, is only available on the vinyl release. It’s a Blue Nile’s cover from their 1989 album Hats. I have to say that Her Name is Calla’s version is even more beautiful than the original, if not better. It left me emotional and hopeful. It’s both haunting and atmospheric. The guitar work was “Carpenteresque” and created an air of suspense throughout.

‘Church’ is an ambient track. I felt it continued that Carpenter influenced vibe.

The last track is a Luudus remix of the title track, ‘The Dead Rift’. Remixes are a great representation of someone’s great imagination and this one is no different.

The band continues to impress with this release. Continually thinking outside the box with their instrumentation but staying true to their sound. They will be touring in support of this release and surprisingly, they have announced an album release in October of this year as well. Incredible!