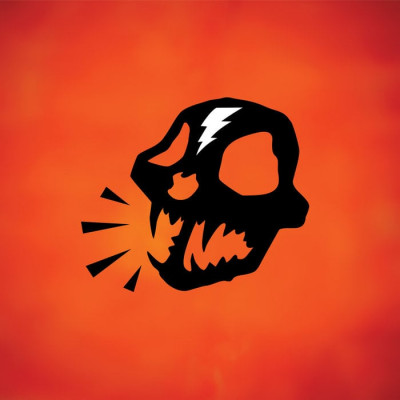 This is nothing new: It’s bold. It’s a smack in the face. It’s sprinkled with a smattering of tricksy mathery but it borrows sounds from across a familiar fuzz-filled landscape, all the while consciously tapping into a melee of sub genres throughout the Rockosphere without ever feeling tired or resorting to out-right plagiarism. This ballsy two-piece are gate crashing their way into the UK’s music scene with a raucous and reckless abandon like a pissed-up Oliver Reed at a chat show; full of charisma yet slightly obnoxious and hard to ignore.

Challenger gallops through an impressively consistent track listing: After firmly establishing the tone with album opener ‘The Patriot’, the infectious stomp of ‘American Graffiti’ confirms the sheer audacity of this band. Singer Matt Reynolds’ larynx crumbles as he caws like some demented hell-crow that “l am not the devil, I’m a Mother-fucking God!” The angst is real.

Both Reynolds and drummer Tom Marsh used to scare the shit out of unwitting audiences in their infamously ferocious project Heck (formerly known as Baby Godzilla) and some of that crackling sonic energy transfers like static into the twitching body that is Haggard Cat. Only here, we are confronted with a much more complex and considered approach to angry rock music: Challenger is full of brief genre-bending pit stops that span from psychedelic, Zep-esque call and response, to octave-laden finger tapping riffs á la Battles and even some more traditional bluesy moments evocative of The Black Keys or The White Stripes.

As far as dirty two-piece bands go, Reynolds and Marsh are a force to be reckoned with and have set the bar high with this glorious, cacophonous collection of riffs and guttural lamentations. Lead single ‘Boneshaker’ has already enjoyed national radio play on Radio One’s Rock Show and BBC Introducing and boasts the kind of blistering riffage that nestles in abundance amongst the crispy, retro landscape of Haggard Cat’s formidable debut album. They have enjoyed tour support with the likes of Jamie Lenman and already opened the main stage of noteworthy festivals such as Camden Rocks and ArcTanGent.

There’s no denying that this band are ones to watch for the future and are already working on material for a follow up to this impressive debut.

Challenger was released April 20th 2018 on Nottingham based label Earache Records (formerly home to artists such as Clutch, Godflesh and Napalm Death among many others).