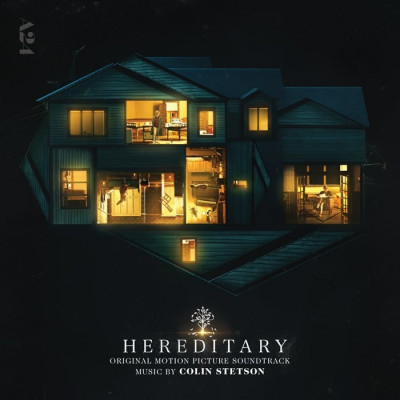 By now you’ve probably encountered some of the swirling hype around Hereditary, to which Colin Stetson here provides an original soundtrack. It’s been tipped as the best horror film in years, apparently features a stand out performance from the always great Toni Collette and has already scarred a bunch of young Australians when the trailer was accidentally run before a kid’s movie. That must have been a fun afternoon for all involved. I’ve not had chance to see the film yet but Stetson’s score provides a set of richly textured and no doubt effective accompanying blasts.

Unsurprisingly, it’s hardly easy listening. Tightly scoring to scene Stetson creates a series of sound paintings of mounting dread, fear and panic. The general mood is a set of queasy drones which rise to viciously dramatic punches of noise and abruptly cut off. Initially this seems to be the base template for everything here from the brief 41 seconds of ‘Second Seance pt2’ to the full 8 minutes of ‘Steve’. Closer listening reveals an impressively varied set of approaches and textures brought to that template but also some other ones too. It’s a world away from the lengthy, lyrical and multifaceted compositions on Stetson’s last album All This I Do For Glory. Cold and isolating where that record felt warm and inclusive. It’s hard to see this being something you put on and relax into but then, it is a horror soundtrack.

As always with Stetson it’s a technically impressive achievement, using a range of clarinets and saxophones he builds a detailed and ominous sound world that bears but scant traces of its instrumental sources. More often transforming them into bleak industrial drones and decayed clicks and clanks. As in his solo recordings all the percussive elements come from the saxophone, there’s some french horn and trumpet and perhaps a secret weapon in the Lyricon – an analog 70’s wind synth. Horror soundtracks have to have vintage synths right? Even pioneering reinventors of the saxophone can’t resist them. In truth, this is nothing at all like John Carpenter/Goblin horror soundtrack synth stuff or any of the numerous nostalgic re-imaginings of that style in recent years.

There’s not a great deal here in terms of melodic themes, I can’t see anyone leaving the cinema humming any of this to themselves, Stetson opts instead for mood and texture throughout and when he pushes the discomfort into noise, as he often does, it’s gratifyingly abrasive at the same time as being densely layered up. The warmest and most musical piece ‘Mothers and Daughters’ has a softly glowing woodland morning feel that becomes slowly overshadowed by a dread sense that something has gone awry. It comes back around as ‘Reborn’ where it features more familiar sax playing from Stetson an fansd a differing tone as suggested by its title. This is the closest the record gets to reworking a musical theme in timeworn soundtrack fashion.

Ultimately it suffers the familiar soundtrack curse of failing to quite work as a stand alone album. It is also perhaps a victim of its own vastness, it’s more remarkable compositions lost in a sea of repeating anxiety cues. This is a shame because there’s much to enjoy about it and the majority of its subtleties are likely to just race by on a viewing of the film. One for noise and horror fans then, certainly not for dinner parties or listening on headphones when you’re walking home at night.