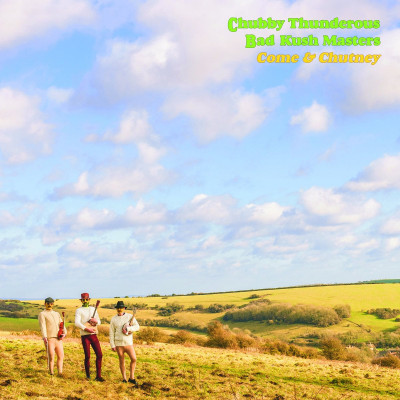 Chubby Thunderous Bad Kush Masters are a London three piece who come with a fearsome live reputation, having played extensively on the stoner doom underground scene, appearing at Desertfest and supporting acts like Dopethrone and Slabdragger. Friends of mine frequently mention the good times to be had catching the band in action and no doubt their corpsepaint and tie-dye look makes them hard to forget, once witnessed. That mouthful of a name is pretty memorable too, although whenever I previously heard it I immediately thought of ancient biker rock japesters Dumpy’s Rusty Nuts (ask your fat uncle). There is a strong whiff of novelty about the band, not dispelled by that heave-inducing album title Come & Chutney (I hate chutney) and song titles like ‘Doggy Bag of Slurry’.

I always feel their is an air of impermanence around bands with silly names – they tend to be musical mayfly’s who dance gaily above the waters for a brief time then disappear without a trace. I mean, what ever happened to Ample Cleavage? Your Mum? The Beatles? Some bands are best experienced in the flesh where their charms, dubious as they may be, can be best enjoyed. I was a big fan of daft glam rock clowns Last of the Teenage Idols, seeing them live numerous fabulous drunken nights, but it never occurred to me to own any of their records.

Anyway, there’s this debut on Riff Rock Records, Come & Chutney to digest, so let’s see if Chubby’s can buck the historical trend and convince me of the validity of their recorded output.

Firstly, guitarist/throat Owen Carty has a decent voice, perfect for the band’s heavy, sludgy stoner – it rides over the top of the cacophony like a big bag of wet gravel. The band create one hell of a racket for a three-piece and opener ‘Doggy Bag of Slurry’ rolls and tumbles in all the usual ways without doing anything remarkable.

Second track ‘Krones of the Kiln’ is an improvement, faster, which seems to suit the bands hooligan tendencies better, and then ‘Cojones Feos’ is better still – a nice droney synth moves into a swinging stoner groove. Carty’s filthy gargle mixed with the repetition in the groove and fuzzy guitars creates an intriguing melange of Evil Blizzard and Electric Wizard, although sadly doesn’t sound anything like King Gizzard and the Lizard Wizard, however this sentence needed them in for reasons of cosmic balance.

The occasional use of synths really elevates the sound, not to the extent that they are as brilliant as the latest Limb record, but it’s certainly a way forward for the band. I’m afraid the next four tracks on the album do very little for me, and it’s not until closing number ‘Psychedelic Hallucinogenic Vagrancy’ that anything really interesting happens. Rising like an exotic orchids from a swamp, ‘Psychedelic Hallucinogenic Vagrancy’ packs more artistry and invention into its epic grooves than all that has come before. This is largely due to the presence of Chantal Brown of Vodun who lends her impressive lung power, and Thom Carter of Riddles who provides heady, fruity keyboards. As the song title suggests, it’s a psychedelic freak out, building on a catchy almost Spaghetti Western style riff into a full on wah wah blow out. When Brown starts crooning, full of her usual soulful sass at four minutes in you just know something special is happening, although it does make me wonder why Vodun have never quite fully realized their potential?

I guess it’s the lack of truly great songs, and that brings me back to this album, for despite having some good elements, a decent singer for the genre, some nice little flourishes and sympathetic and powerful production by Sam Thredder, Come & Chutney is ultimately a little underwhelming – there just aren’t enough memorable songs. I’d still be delighted to catch them live though, and shall do so at the earliest opportunity, just hold the chutney guys…