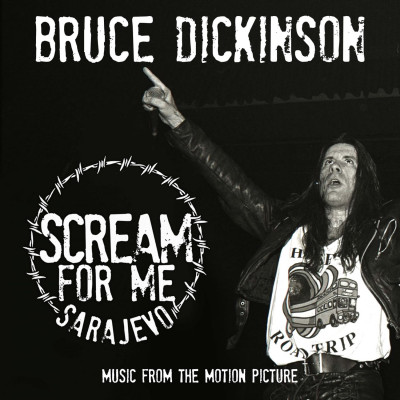 Scream For Me Sarajevo by Bruce Dickinson

Of all of things that Iron Maiden vocalist Bruce Dickinson is known for, his solo career often comes some way down the list. During his time out of the band (and on occasion since he rejoined), he produced several solo albums with a variety of different musicians, that form quite an interesting body of work. In 1994, on the back of his 1994 album Balls To Picasso he ventured into war torn Sarajevo to perform a low key concert. One of the first musicians to play their as the tensions started to lessen, it was still a big risk going out there. This show and the events leading up to it are the subject of the new documentary, and this album serves as both the soundtrack to the documentary and a collection of his non Maiden work over a ten year period.

With nothing featuring from his debut solo album Tattooed Millionaire the first three songs to feature are all from the Balls To Picasso record and so a slower, more hard rock than metal approach from the band. Bruce’s voice is instantly recognisable, but looking back now (as I haven’t heard some of these albums for a long time) it does seem strange to not have that familiar backing behind the iconic voice. Without that pressure on him though, it allowed him to experiment a bit and do things a little differently and you can really see how differently he approached each album through the tracks featured on this collection.

With nothing appearing from The Chemical Wedding it’s the albums either side that get the most attention here. The critically acclaimed Accident Of Birth and Tyranny Of Souls get four songs each. The most instantly recognisable of these songs is ‘Road To Hell’, which was written with and features Adrian Smith on guitar, and there is a huge Maiden sound throughout the track. This is the only track like that on the album, and it sits nicely in the middle of the record, a nice little reminder of his other work, without it overshadowing the quieter, more personal material on the album.

The album ends with a couple of new and rare tracks. There is the live version of ‘Inertia’ and the previous B side ‘Acoustic Song’ before the closer ‘Eternal’. A suitably epic song to end the album. It seemed strange at first that the album of the documentary wasn’t a live recording of the show, and then that the album featured music from after that particular tour and time, but once you get into it, it’s a good record of Bruce’s other output over the years. An interesting collection of song, some of which I’d totally forgotten about and, as on the whole it’s quite different to his other band, it was refreshing and given me the need to go back and check the albums out in full again. Different, and all the better for it.