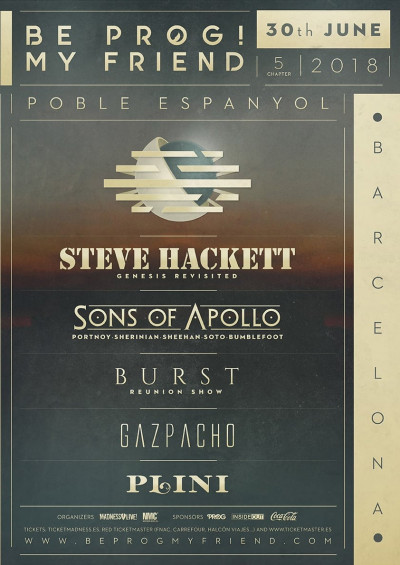 Be Prog! My Friend

Headlining the Saturday night is one of prog rocks biggest draws, as Steve Hackett brings his Genesis Revisited show to Barcelona. With two hours at his disposal, expect a wet dream of a set list, with particular focus on the Wind and Wuthering album, alongside ‘Supper’s Ready’, ‘Firth of Fifth’ and more in the ultimate tribute to Genesis, played by a cast including the theatrical Nad Sylvan on vocals.

Hackett’s set will also include a solo section spanning his 43 year solo career, from debut album Voyage of the Acolyte right up to last year’s The Night Siren, including marking the 40th anniversary of Please Don’t Touch, his first LP after leaving the ranks of Genesis. Expect all this and more surprises to ring out into the open air arena in one of Barcelona’s most unique settings.

One of the biggest personalities behind the drum stool makes a return appearance to Be Prog! on Saturday night. Mike Portnoy brought a special show to this arena list year, with Haken members comprising the majority of his band. This year he’s back with Sons of Apollo, an all-star supergroup featuring his former Dream Theater cohort Derek Sherinian on keyboards, Jeff Scott Soto (formerly of Journey and Yngwie Malmsteen) on lead vocals, Billy Sheehan (The Winery Dogs) on bass and Ron “Bumblefoot” Thal, formerly of Guns N’ Roses, on guitar.

Releasing a fully formed classic album as your debut release is a rare trick, but one the Sons pulled off with Psychotic Symphony. This brilliant debut touches on classic rock, isn’t afraid to shy away from singalong choruses but is driven by progressive song structures, devastating riffs and flashy playing from all involved. Performing the album in its entirety on the night, alongside some treats for Dream Theater fans, expect a statement of intent from Sons of Apollo. Here’s the recently released video for ‘Signs of the Time’, its footage suggesting the American five-piece are as commanding on tour as they are on record.

Sons of Apollo aren’t the only draw promising to play an album in its entirety this evening. The post-midnight slot and privilege of following Steve Hackett goes to a specially reunited Burst, one of Sweden’s finest progressive metal exports. Burst are back to showcase Lazarus Bird, their fifth and final LP, alongside other selections from their repertoire. Take a listen to opening track from Lazarus Bird that shows off the band’s far reaching and eclectic progressive metal mix. Getting Burst to reform for this year’s Be Prog! My Friend represents something of a coup for the festival, hence it’s advised not to miss this year’s closing performance.

Many of the bands at this year’s festival plough a metallic furrow, but part of the appeal of the two-day event is the diversity on offer. Gazpacho are a more introspective offering than many of the bands appearing over the two day event, but given the strength in depth of the Norwegian art proggers’ back catalogue, they’re sure to be a highlight on Saturday night. Check out ‘Exit Suite’, taken from their latest LP Soyuz, for a taste of their refined rock sound.

In a world full of bedroom guitarists that prize technique over compositional ingenuity, Plini has developed a reputation as something of a maverick. Although the influence of Dream Theater, Steve Vai and other progressive metal fretboard masters is evident in his sound, the young Australian proved with Handmade Cities that he is first and foremost his own artist.

With recent release ‘Salt and Charcoal’ seeming to borrow from King Crimson’s rhythmic rulebook, expect a highly charged, atmospheric show that may even include a taster of the next step in Plini’s ongoing musical evolution.