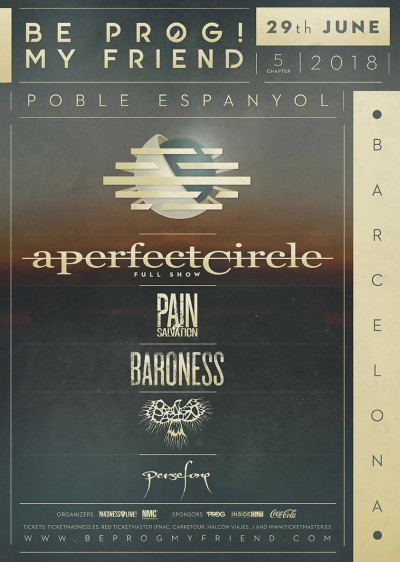 Be Prog! My Friend

Barcelona’s Be Prog! My Friend is a festival that values quality over quantity on its impressive line-up, showcasing 5 of the scene’s brightest acts on each day. Headlining the Friday night, A Perfect Circle fans will be treated to a full show from the art rock band. With the rumour mill running overdrive surrounding the return of Tool, Maynard James Keenan’s other outfit surprised everyone by reuniting last year and drip feeding fans four stylish singles all of which will surely be aired by the supergroup, consisting of Keenan, Billy Howerdel, Smashing Pumpkins’ James Iha, Bataclan survivor Matt McJunkins and Jeff Friedl (Puscifer).

Following a gap of 13 years since their last studio album, Eat The Elephant reassured us that Keenan has become no fonder of society, lyrically presenting a contemporary update on the dark and scathing themes familiar throughout his work. Musically the album shifted focus towards a mellower, electronic sound and a crisp, atmospheric tone. Expect to hear the best of this LP, plus their greatest hits, including standout ‘Counting Bodies Like Sheep To The Rhythm Of The War Drums’, an industrial rallying cry against the slavery implicit in mass media control.

The last time Daniel Gildenlöw’s Pain of Salvation performed at the inaugural Be Prog!, the musician had just recovered from Necrotising Fasciitis. He and his Swedish cohorts have since gone on to record and tour In The Passing Light of Day, possibly their most accessible and accomplished album to date. Expect their complex song structures to go down well in what should be a triumphant return. Their regular encore, the title track from their most recent album, should be a defining moment at this year’s event.

Baroness bring their unique brand of sludge metal to the party beforehand. With Gina Gleeson arriving on guitar and vocals, replacing Peter Adams and joining ever-present John Baizley and the remainder of the Purple album line-up, expect to hear a mix of classic and new material including the Grammy nominated ‘Shock Me’, a perfect introduction to the American quartet’s sound that pairs bludgeoning heaviness with soaring guitars and anthemic vocals.

Oranssi Pazuzu hardly provide light relief after A Perfect Cirle. The Finnish band take their name from Babylonian mythology, and present a psychedelic, mazy musical taste experience within each track, throwing dub, space rock and more to add to their metallic brew. With a dazzling live reputation preceding them, it’s worth staying the course until the early hours, although those prone to nightmares would have been wise to check out prior to A Perfect Circle!

Check out the hypnotic, tribal ‘Vasemman käden hierarkia’ for an example of Oranssi Pazuzu’s innovative sound, proving Be Prog! to be a festival not afraid to look to the genre’s extremes to pull together a diverse and enthralling prospectus.

Persefone are the first band to grace the picturesque surroundings of Poble Espanyol at this year’s edition. The Andorran band formed in 2001 with a name recalling Greek mythology and honed a powerful blend of progressive and death metal that’s evolved with each release. They made a significant international breakthrough with their fourth album, Spiritual Migration, in 2013, a work of art that looks outside of genre confines and warrants listening to in its entirety.

With eyes turned to the Andorran metal scene for perhaps the first time, the sextet were able to repeat the trick with Aathma, attracting guest musicians from Cynic and Leprous and venturing further into electronic and progressive territory without diluting the intensity of the more extreme passages, particularly on the four song suite that closes the album. Make sure you arrive early to catch Persefone’s scintillating performance.