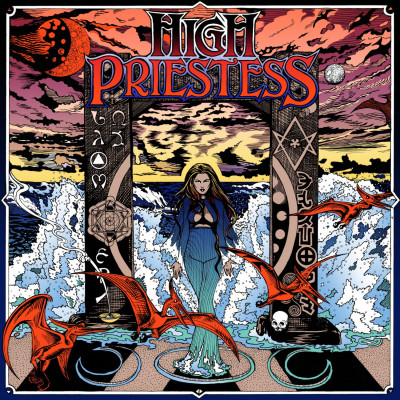 High Priestess is a new psych/doom trio from Los Angeles made up of of Katie Gilchrest on guitar and vocals, founder Mariana Fiel on bass and vocals, and Megan Mullins on drums. This is their debut album, but ahead of that Ripple Music made the band’s demo available to the press and their growing fan-base, which is where I first heard them. It was easy to see why the band were signed and are garnering favourable reviews locally, as the demo was an impressive introduction, full of strong performances, promising songs and just enough individuality to mark High Priestess out from the metal hordes.

The album contains virtually the same set of songs, in the same running order, apart from new track ‘Banshee’, more on which later. Where the band score big is in their style, with songs full of the solemnity and grace you hear from bands at the less hammy end of doom metal. This is leavened and enhanced by the, at times, stunning vocal interplay between Gilchrest and Fiel. The demo was of a very decent quality, but a proper studio production has added extra depth and texture to their sprawling, psychedelic sound.

The first two numbers in particular are both are excellent. ‘Firefly’, which opens proceedings is ten minutes of epic, slo-mo intensity, with an almost tribal rhythm underpinning a classic and classy guitar motif from Gilchrest, leading into the inevitable crushing groove. Trust me, now highly polished and at full volume, when this song kicks in you will be hooked, even before the twin vocals are raised to the heavens, intertwining and effortless. A long instrumental passage leads to a noisy crescendo before the crushing groove returns and then into another final noisy acceleration and fade. Stirring stuff.

Second track ‘Despise’, also nearly clocking in at ten minutes, carries a surprise amidst its classical guitar intro and gothic atmosphere as the singers use bursts of harsh, gutteral growling, counterpointing the sweet harmonies to utterly brilliant effect. It is done sparingly, but with real venom and adds earthier, angrier tones to the song which is otherwise quite stonerish in its swirling middle passage. There is a small danger of the song collapsing, a fault repeated elsewhere as the band are unafraid to abandon song structures and just sort of breathe, something I hope future producers could help to keep in focus.

‘Banshee’ slips in to the track listing here, and I was really looking forward to seeing what else the band has to offer, but alas, it’s the weakest cut on the album. Built atop more hypnotic, tribal drum patterns by Mullins the song itself is a rather cliched (for metal) scary lullaby affair, resorting to over-used horror tropes in the lyrics and atmosphere. It only runs to just over four minutes, brief by the bands standards, and I wonder if this track was added just to increase the running length a mite.

The remaining three tracks which survive from the demo, the bluesy ‘Take The Blame’, a close relation to Witch Mountain, the doom-gazey ‘Mother Forgive Me’ and the beautiful, folk-inflected ‘Earth Dive’ certainly all have their moments and restore your faith in the band. ‘Earth Drive’ includes the best guitar playing from Gilchrest, who peals out gorgeous Thin Lizzy-esque streams of notes. Vocally always impressive and with some good melodies throughout it’s a pretty strong debut, but really the last three songs are just backing up the case put by the music contained within the first two numbers.