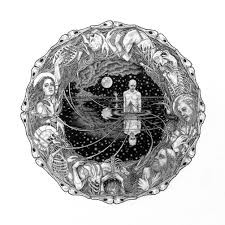 Through The Void by Garganjua

“Fuck it, mate, here you go.” That was Garganjua’s response to my request for a pre-release sample of their second album, way back in January. It was as if they didn’t care who listened to it. But they should. Because this album is very, very good. It is better than their debut – which was in itself a great example of the expansive directions that doom can go – and it is testament to the adage that if you make music that is worth hearing, people will do their best to make it heard.

Because from what I can gather, this album was recorded – at the home of massive riffs, Skyhammer Studios, no less – then life got in the way. So the band then crowd-funded their baby to ensure a physical release. And – full disclosure – on hearing that a follow-up to Voyage in Solitude was in the offing, I jumped on board. As did many, by the looks of things, because Garganjua reached their target within a few weeks.

I am glad I did my bit. The band had promised progression, more far-reaching realms and more experimentation than Voyage – and they have made good on that pledge. And they have done so while also avoiding many a band’s plight when trying to realise an enormous vision: that of discovering a path that leads them on a long journey up their own backsides.

The album, like their last, is four songs long. They are tied together with the concept of being adrift or lost at sea. The first, ‘Crushed Beneath the Tide’, begins with a foreboding, atonal guitar – like a doom version of the into to AC/DC’s ‘Overdose’ on Let There Be Rock – which is dragged further into despair with some full-on throaty death roars.

Then comes The Riff. And what a riff it is. It only lasts for around a minute at each end of the song, but crikey, it is a good one. It belongs in the Cave of Truly Great Doom Riffs.

We could easily describe the rest of the song – and indeed the album – with the usual doomy phrases: “quiet bit here, melodic singing there, funereal riffing elsewhere”. But that would be missing out on the fact that the songs are satisfyingly long, immersive trips into everything we like about doom. And this is to be applauded. Particularly because lets face it: simply because of the genre’s perceived simplicity (tune down your guitar and bass a few notches, distort the bejeezus out of them, play a slow riff over and over again and head to the pub) there is a tremendous amount of mediocre bands out there.

But Garganjua clearly are thinking outside the coffin. The second song on this album, ‘Adrift’ has some genuinely heart-rending vocals aligned to some thoughtful guitar work and subtle rhythmical changes. And it should be mentioned that Chris Fielding, the honcho at Skyhammer, has done another stellar job at making every whack of the drum kick you in the guts and every slab of bass and guitar flatten your face. The sound is quite frankly massive.

The title track, which opens side two, has both vocalists, death-roar man and the guy with the voice, alternating to great effect. Then there is the atmospheric interlude with just a bass, joined by a clean guitar – and that in turn heralds a long almost blackened drone, which is pulled back from the brink with a tremendous melody from the clean vocalist seeing us out to a pulsing riff. It is desperately sad sounding, but warm and enveloping at the same time. Just as doom should be.

The final song, ‘A Distant Shore’ is more pensive and provides some closure, if not a happy ending. It hints at redemption, but finishes with a lonely acoustic guitar, a desolate violin, then another heart-rending vocal hook – leading us to believe the that the shore for the protagonist remains distant.

But we on dry land are left more than happy. But even if after reading this, you are still unconvinced that this is one of 2018’s standout doom records; if you are wavering over whether to spend your hard-earned cash on this effort, may I offer you a mangled version of what the band told me: Ah, fuck it, buy this album.