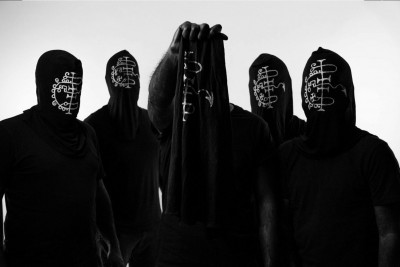 Everyone dreams of becoming a celebrity, a dictator to others, a model for others to follow. And that is all part of the sickening way we tend to live.

It’s there, silently on the far west of the European continent. The last land that explorers saw when they left and the first to herald their return: Portugal. The country is the quiet gem of the Mediterranean, oddly always a bit obscured compared to Spain, Italy, and France. Yet it holds beautiful nature, culture, and customs and with bands like Gaerea also a metal scene full of wonder.

As a band, Gaerea is pretty young but instantly connected with me due to their overpowering sound, particular aesthetics, and refreshing feel. The music of the band deals with introspective themes, with art and expression of negative emotions. This they do extremely well on their latest record Unsettling Whispers, out on Transcending Obscurity.

Gaerea were kind enough to answer some questions and tell more about their band, vision and what this music means to them. Thanks to Kunal Choksi for making this article happen.

E&D: Could you kindly introduce yourselves? Do you play in other projects next to Gaerea?

Gaerea: This is Gaerea, a black metal quintet to emerge from Portugal. Due to the fact that all members are insatiable creatures for art, everyone has other projects to fulfill different parts of their beings.

E&D: When and how did Gaerea get started? Which bands would you consider your inspiration?

Gaerea: Even though Gaerea was a fetus inside one’s head for quite a few years, it was in 2016 the band was born with the record and release of the first debut EP. It was released via Everlasting Spew Records back then. We take many inspirations from different kinds of art like paint, cinema, and music, of course. We like bands such as Obsidian Kingdom, Shining or Watain. Mainly because of their conceptual work other than music, which nowadays is so underrated. Music is not music anymore. 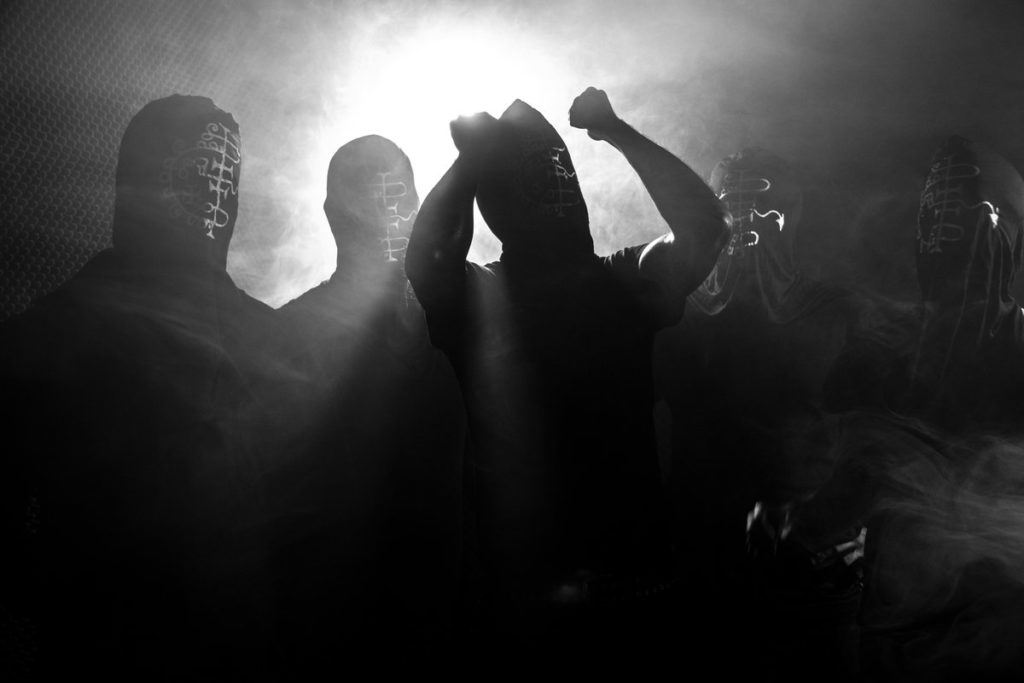 E&D: Can you tell about the concept behind the band? As in, what ideas, vision and such shape Gaerea and the art you create?

Gaerea: Gaerea acts as a reporter, a bringer of the chaotic message from the Void Society. It is a burden we all must carry for it also relates to us as individuals who are also lost on their own bubble.

The album goes deeper into this conceptual world. Again, the message is brought to you by a third person who watches everything that occurs in a street, a city. It is another dimension where suicide is part of the human regular daily basis. Death is a dream from another world. Aging is something for the lost generation and most of all, feelings of joy, anger or sadness no longer exist. They are part of a well-remembered past, a topic which once was praised and now is clear and present.

E&D: I’m also interested in the visual aspect, for example, the sigil on the masks you guys where. Where do they originate from and how did you come up with the overall visual expression, like the album covers. Also do you create this yourself?

Gaerea: Yes, most of the visual aspect is crafted by the band itself. The masks, the conception of our symbol and even the first EP’s cover. The album cover was painted by an artist we respect: Khaos Diktator.

Above all things such as where did all of this come from, it is important to state that the basis of our work is to put out characters which have no name, face, feelings or equal skin from others in the audience. For me, it was a normal visual reaction from what we see today inside our system. We are just lost ents who crawl under our dreams to get bigger, fatter and richer lives. Everyone dreams of becoming a celebrity, a dictator to others, a model for others to follow. And that is all part of the sickening way we tend to live.

Back to the album cover, it a piece filled with beautiful details not just in terms of paintwork, but also it is the catch of the perfect despairing moment where death is only a mirage. We see the old pale man falling apart while anxiety and numbness consume him. For us, it is the perfect face for this release.

E&D: Your next album is out soon at Transcending Obscurity. How did you end up signing to this label and how has it been to you this far?

Gaerea: We had some offers from other labels after we finished recording the album last summer. Many were interesting and others not so much. Transcending Obscurity was the one which stood out with a good offer, a sick promotional work and most of all understanding the band, its concept and motivations for this release. It has been a good start.

E&D: Your next album, Unsettling Whispers, is appearing soon. What can you tell about the writing and recording process for this album and how did you feel you progressed from your EP?

Gaerea: It definitely goes deeper into the void concept, which for me, is a step forward and a final nail in the coffin for that concept. The music is just different from the one we recorded for the EP. The feeling and expression was also something very different and mature so that’s why some people may hear a more “grown-up” band in Unsettling Whispers.

The writing process happened right after we released Gaerea EP, surprisingly. I was not expecting a new wave of inspiration. For me, we didn’t necessarily have to put out another ep or album. The job was done. But yes, inspiration took us by surprise and things started to happen fast. All the writing process took just half year to conclude and in June we were recording the album at Demigod Recordings in Portugal with Miguel. The recording process took us only 2 weeks to start and finish the whole thing. We knew exactly how it was supposed to sound and fortunately, we worked with a very good producer who instantly gave new ideas and approaches to our music.

E&D: What is the story on the album and how was it conceived conceptually? From what did you derive inspiration for it?

Gaerea: From the first moment, this band started to take its first steps, we got into Thomas Ligotti’s work. It definitely changed and was an inspiration for this album. Saramago is also a creature who is firmly present in this conceptual work. All is explained in the lyrics and texts of an extended 20-page booklet inside the digipak.

E&D: When listening to the now released track, I feel that your sound progresses from the traditional black metal sound into something well-polished, balanced but yet very heavy. In a sense, harder to classify in a genre. Is that where you’d like to place yourself as a band?

Gaerea: Personally, I can’t really fit this band into one genre only. Of course, it has strong black metal roots, although you may find other styles like doom, death or hardcore. I don’t think about it. Nowadays it’s just weird to see people categorizing contemporary music.

If it was meant to be squared or direct, we wouldn’t have today’s artists like Hans Zimmer, Marina Abramovic, and others. It’s art which takes elements and inspiration from every other art realm already conceived to create or mold something called “new”. And no, I’m not talking about only music.

E&D: As I see it, you are pushing what it means to make black metal forward. In your perspective, what is black metal in its essence, what does it mean in 2018?

Gaerea: It doesn’t mean anything, but something to be an inspiration for today’s artists and above all, something to be respected. It’s something which made total sense to be born inside Norway’s nest and spread like a plague to the world. Nowadays it’s just hard to do “pure” black metal cause the world has changed, metal music also changed a lot.

Every artistic movement happens on its own timeline for a reason. For me, it is strange how some new artists try to copy or recreate the same exact music in 2018. I don’t think that we’re taking black metal forward. Gaerea stands for another reason. But of course, we enjoy embracing new followers and people who think that just by hearing the songs.

E&D: Right now this kind of music is constantly under scrutiny. Watain, Marduk and so forth. How do you feel about this and what sort of situation do you face in your own country?

Gaerea: Taake and Inquisition also. We are aware of what’s happening in today’s media and Internet world. Yet, we don’t condemn artistic choices, but personal ones which can ruin a career hard or impossible to be rebuilt. Let’s not go into detail regarding what we feel about every case. It’s not up to the Portuguese underground band to take part or to catch the moment to say anything about bands we respect and wish some things weren’t true. The one thing that matters to me is art and what their music means. 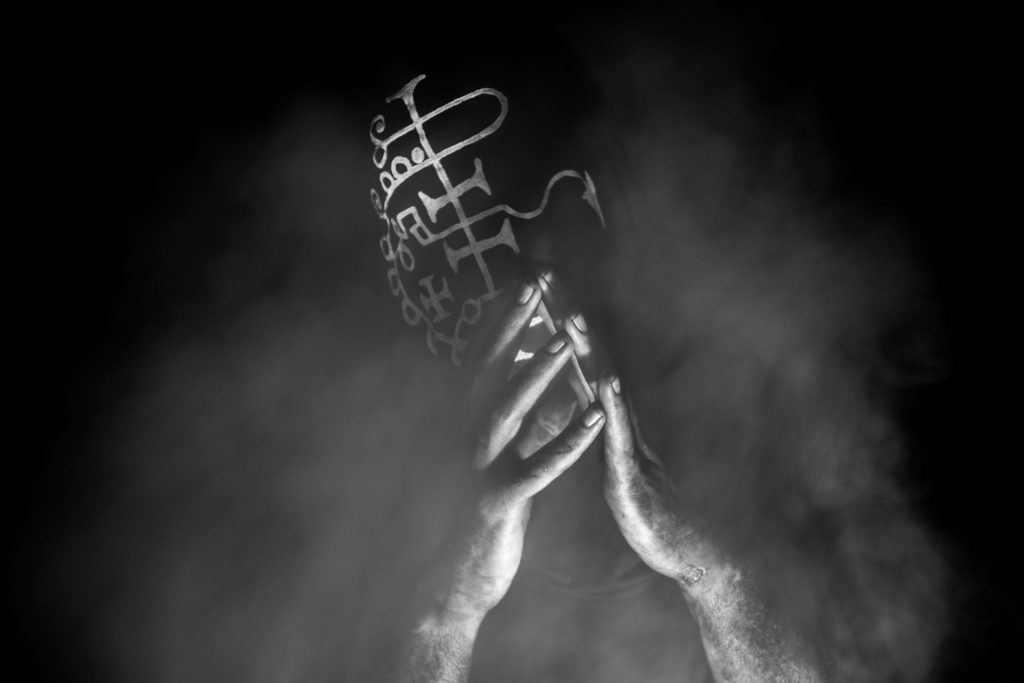 E&D: Could you tell me a bit about the scene in Portugal? What is happening there currently?

Gaerea: Everything is way smaller in Portugal. No big scandals because there aren’t many big bands and people just don’t care too much about it. Good thing we have some of the most die-hard fans in this country who will follow their favorite artists no matter what.

E&D: For your style of music, who do you look to as pioneers you follow up with. As in, regarding the history of metal in Portugal, do you place yourself in line with any pioneering bands as such?

Gaerea: Artists like Shining, The Great Old Ones, Obsidian Kingdom or even Secrets of the Moon. These are some strong names for us. And even though they do not fit entirely into the black metal genre or anything, neither do us. Regarding your second question, as I told you, we do not think too much about any of that. Of course we’re ambitious to the point we walk in a straight line towards the success of those acts. But still, we’re a small group and we must keep that in mind. We still have our own long path to craft.

E&D: Which bands from Portugal should people really check out?

Gaerea: We follow a lot of Portuguese acts. On the top of my head are The Ominous Circle, Process of Guilt and Lobo.

E&D: What future plans does Gaerea have?

Gaerea: For now, we have a massive release coming up. Some special appearances are being booked as we speak. Still, do not expect any extensive touring season.

E&D: If you had to compare Gaerea to a dish, what would it be and why?

Gaerea: Francesinha. You’re probably not familiar with this typical Portuguese dish, but if there’s anything worth checking out, it’s that monstrous sandwich.

E&D: Is there anything you’d like to add that I didn’t ask?

Gaerea: Unsettling Whispers is due to be released 22nd June. You know what to do.