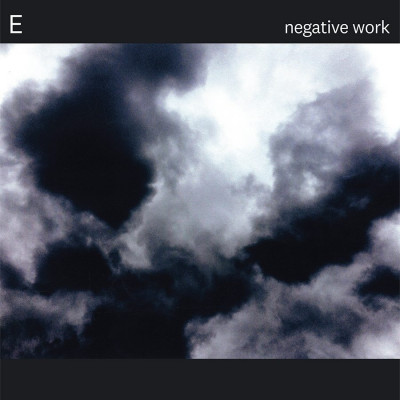 Beneath the moody clouds on the cover a guitar clanks out a desolate chord, then another, then back to the first. A second guitar asks questions of it, then the drums come clattering in and all three head off down the street at an exhilarating, pulse racing, glide. This is ‘Pennies’ the opening shot of E‘s second album Negative Space. It’s a perfect introduction, the album’s first word, in Thalia Zedek’s gloriously beaten voice, is “Hello”. Her verses are interspersed with surges of Jason Sanford’s home made guitar, underscoring the chorus like a wailing siren. In its final minute the whole song takes flight on one of those heart soaring, transcendent rushes you’d half forgotten bands could do. Currently my ‘favourite moment in all music ever’ I kind of want to loop that section out to at least five minutes and just live inside it for a while. They cut it off abruptly though with the kind of taut rigour central to their sound. Nothing gets over indulged. E’s music is full of interesting approaches arranged in unusual structures but kept song shaped by the tension between the elements and players. As wild and noisy as sections of it are, it’s also quite spacious and pleasingly melodic.

E are a dynamic power trio, (Jason Sanford (Neptune), Gavin McCarthy (Karate), and Thalia Zedek (Come, Live Skull)), a remarkable coming together of Boston underground veterans to create something startling. All three write and sing and their instrumental voices are distinct within the music too. They play with a sort of combative synergy that feels as if forever straining at the leash. As a long time fan of Zedek’s work the arrival of their self titled debut 18 months or so ago was like a gift falling from the heavens. I was surprised and delighted just by the idea of it and, once I listened to it, I was thrilled. The appearance of a second one hot on its heels seems only slightly less miraculous and it’s great to see them keeping standards high. ‘Poison Letter’ is tightly wound in its skeletal verses and explodes in discordant spasms. ‘A House Inside’ brings a choppy post punk ghost story. On ‘Down She Goes’ they sound at first like The Wolfhounds and then NOMEANSNO. It’s an arresting combination that I’ve not previously considered but now hope someone, somewhere, is forming a band to explore further.

They’ll be supporting Shellac later in the year, a good match for while they don’t sound that much alike there are apparent similarities in their approach. Some of the sounds and textures recall Sonic Youth, but without the sprawl. I think the ‘three-headed band’ thing has something to do with those comparisons too. Indeed it’s possible to hear the last 30 to 40 years of American avant rock spooling through the background of this album; no wave and hardcore, math rock, post-rock, noise rock all feed into it but none of them overpower the band’s own voice.

The album’s title comes from sculptor Alberto Giacometti – the subject, indeed possibly the narrator, of ‘Hole In Nature’. He’s best known for his wasted, slender figures reduced down to an existential essence, a process of reduction that has echoes in the way E create as well. “Writing a good song is frequently not so much about how much you can put into it, but also about how much you can take back out,” says Sanford. It’s a trick they seem to have mastered, the songs are compact and bristle with ideas. Negative Work is a great record from a tough and inventive band, a vividly successful collaboration bending guitar rock into different shapes.