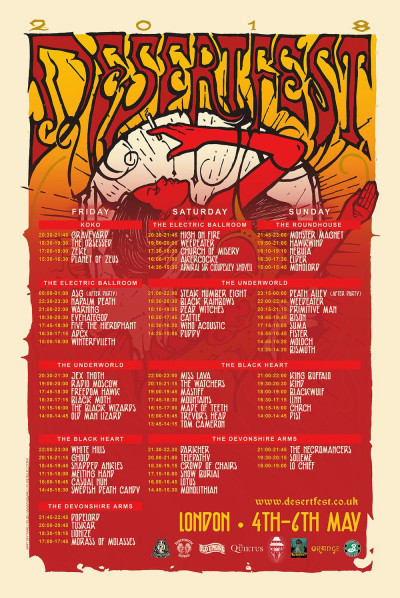 As we descend into the familiar bowels of the Underworld, Old Man Lizard are kicking things off. Early numbers wrench bluesy, bent notes and pummelling drums in a grouchy Jesus Lizard (coincidence?) style. Lead singer and guitarist Jack Newnham’s tortured, strained vocals are an, ahem, acquired taste, but the racket they make is strangely comforting: the arch and smart between song comments and grungy 90’s vibe get me feeling vaguely nostalgic for long-gone days. There is a trance-like aspect to instrumental passages on ‘Trees Fall Down’ and already Camden is a nod scene, so much so only those of us not spaced-out notice that the guitar seems to have gone AWOL. They play a track off their album about a big plant and it’s not cannabis, which is a shock, as is its progressive bluesy chops and complicated structure. We’re off and running!

We head over to The Black Heart now for some acid rock, and one of the most promising acts on the bill. As Swedish Death Candy‘s diminutive singer and guitarist Luis Perry leans back into the 70s’ grooves during the first number you feel sure it’s gonna be okay, if safe . . . and then it gets trippily animated, rug-tugging weird for a bit – with rushing time-changes like a headlong time warp, forwards and back to Hawkwind and Sunday night. There’s a splendour and pomp to their their sound, although what “their sound” is is almost mindbogglingly vast. The second number has a QOTSA riff of intense if familiar intent, with weirdly high pitched vocals like Josh Homme at his most fey. Fans of the Oh Sees and Bo Ningen will recognise and enjoy their off kilter over-driven psych charms. ‘Last Dream’  slows things for a bit to feature the vocalist’s  lovely folkier tones before it gets all riff-tastic again. We are all pretty much speechless by this point. They play to a packed room and it goes suitably nuts at the end. On another day they could have encored for a very long time, I’m sure.

And now to Freedom Hawk, back at The Underworld, and hey, even the soundcheck was groovy. The vocals of TR Morton are smeared like a baleful, Ozzy-apeing pancake across a platter of finest earthenware riffage ripe for an Antiques Rockshow evaluation. Their gorgeous twin-guitar attack is prominent from the off with Morton often stood with his foot up on the monitor, as he knows it just don’t sound right otherwise. The band have the seemingly instinctive, locked-in rhythmic force of Motorhead; and to continue the theme, if Lemmy had given Sabbath a shitload of speed this would be the result. The bassist Mark Cave occasionally lurches in at us from the stage like he wants to hug us or crush us, I’m not sure which, and I almost step back! But really, this is as good natured and inclusive as rock gets – If you ain’t getting down to the NWOBHM old-school chug of songs like ‘Solid Gold’ then you’ve got no business being in the room. I keep thinking they’ve peaked until twin-guitar harmonies and the bullet tough drum battering kick in again and again on tracks like  ‘Indian Summer’ and make me guess again. One of the most enjoyable sets of the weekend, Freedom Hawk make gloriously uncomplicated classic metal.

Eyehategod have a tentative, fuzzy warm-up too, if not as funky as Freedom Hawk’s. But it’s not long before they’re launching into the deathly sludge. It was like they were taking pity before hitting us with hardcore blasts of filth. They are a strangely imposing bunch, especially guitarist Jimmy Bower who looks like a bear who has eaten Crowbar’s Kirk Windstein and is now trying to pass himself off as him. In many ways they are the ideal warm-up act for Napalm Death‘s thuggish nihilism, and the crowd in the very busy Electric Ballroom have been chanting their name for some time before they appear. Unlike a lot of sludge, with purer doom roots, EHG are like Cromags meets Sabbath, and whilst I appreciate their place in the pantheon and love their influences, they do nothing particularly interesting with them. For me, even extremely heavy music should hold the ability to elevate the senses; however, I find Eyehategod merely another burden on the soul. I stagger out into the sunshine after half a dozen songs – yes, it’s still there – and go in search of other sounds. . .

I realise Ghold are playing at The Black Heart soon, so I find some floor space there and give my weary legs, liver and ears a rest for five minutes. When they do appear, it’s to play to a lot less than Swedish Death Candy – I think all-day drinking on a sunny Friday is taking its toll on the masses. I kind of enjoy Ghold’s sound – a sort of industrial, robot rock. I’m reminded of God Machine or Uffomamut on a smaller budget, for some reason, although I’m not trying to flatter them. Ghold edge towards post metal on occasion, without ever unsexing themselves. There’s too much grit and grease in their mix to entirely leave rock ‘n’ roll behind. Now I do find bands with deliberately muffled and distorted vocals are fine for creating an atmosphere, but not ideal for engaging intellectually; so there are moments of real, effective drama whilst never transporting me from a room above a pub.

I decide to go and catch a bit of Jex Thoth‘s headline set at The Underworld after being told they are “up my alley”. There is a hush in the room as I enter, and it is clear the ceremony has begun. Rapt followers gaze stagewards as the artist formerly known as Jessica Toth weaves her spells. Lit only by blue spotlights throughout, it is hard to make out exactly what the singer is up to; but there is much hair tossing and jerking about the stage as the band create an occult doom dreamstate. At one point she sets fire to something, probably a big lump of incense or hash, and the sight is remarkably transgressive in these smoke-free times. The tunes are captivating if not immediately memorable, but the only real obstacle to greatness for this show is what feels like a disconnect between Jex and the rest of the musicians (even with hubby on bass) who are all pinned to the backline and anonymous. It feels like a jobbing, backing band, not a tribe of Californian outsider artists, which is what they surely are. However good the playing is it feels a bit stagey. Jex is a natural and hypnotic performer, but I like to see bands as gangs, a vibe Black Moth gave off in spades earlier on this stage today.

There’s seldom been a better time to be a strong, maverick female in hard rock, and judging by the tremendously enthusiastic crowd reaction tonight Jex needs to get some new product out there, as her last LP was five years ago. The recorded output she does have was available at the merch table, and it’s there I spend my last minutes of the night chatting to excited new converts to Jex Thoth’s cult, snapping up her EPs. Happy punters connecting and discovering great new music: Desertfest your work is done!