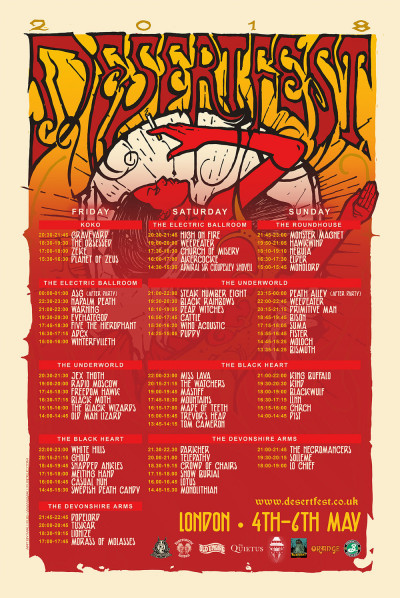 As intriguing as the line-up was elsewhere there was only one place I wanted to be on Sunday of Desertfest, and that was The Roundhouse for the what was the festival’s biggest venue and suitably starry castlist to date. . .

After the ultra-modern Orange backline of Monolord, with their state-of-the-art doom, come Elder with a hotchpotch of gear, including some old-school Marshalls, and a screen showing, trippy, organic visuals. It marks them out as more classic-rock proposition, especially with lead singer guitarist Nick DiSalvo looking and soloing like vintage Scott Gorham during opener ‘Sanctuary’. And boy, check those heady 70’s prog guitar runs that introduce the second number ‘Compendium’ which moves into a thunderous Zep riff. However, there are still moments where you could shut your eyes and convince yourself you are listening to a shoegaze band at full throttle, like a shaggier Ride.

There is, of course, a substantial progressive rock vein running through their lengthy excursions, with the melodies of Rush meeting the tech flair of Mastodon, and that seriousness does need a little tempering or the band could come off as aloof. They are lacking a little in charisma, but Elder are masters of their craft and are presently at the top of their game with an air of future headliners, judging by the size of the crowd for them at this early stage in the day. They do lose their way for a while on ‘Dead Roots Stirring’, but pull it around for the epic-closing ‘The  Falling Veil’.

Now I haven’t seen Nebula in a very long time, and whilst its great to have them back I had identified their set as point to maybe escape the Roundhouse and go check another band in Camden. But with the venue so full for Elder I figured I couldn’t risk not getting back in, so I stuck around,  and boy am I glad I did! Nebula basically ripped the Roundhouse a new one and left us all smiling. Looking 20 years younger than he has any right to, sole remaining founding member, vocalist/guitarist Eddie Glass, perfectly symbolized the garage-rock ying to Hawkwind‘s yang that combine to make up headliners Monster Magnet. Uncannily resembling In Utero-era Kurt Cobain, Glass plays his guitar like its making his fingers bleed – it’s the punky flip side of 70s’ rock, and reeks of guns, riots and fucking in the streets. A vicious Stooges-MC5 mash up that locks into noisy grooves and is not sharp and slick, the total opposite in fact; but Nebula’s ragged glory is equally guaranteed to create a great rock show as any sublime musicality or sturdy professionalism. The drummer (I think Rob Oswald of Karma to Burn) seems to have as much idea of what’s gonna happen next as we do, and goes somewhat haywire at times; but it all adds to a fucking great atmosphere as the power trio tear through cuts like ‘All The Way’ and ‘Let It Burn’. The surprise of the weekend, it’s great to hear they are planning more dates soon.

‘Dopes to Infinity’ people. A song written to grace the stages of Desertfest and a fitting start to the band’s triumphant headline set. But hang on, it’s not all going to plan – well, my plan. In my review of Monster Magnet’s new album Mindfucker I dismiss opening two cuts ‘Rocket Freak’ and ‘I’ve Got Soul’ as substandard,  and just my luck, it is those two songs we get next; but live, well, the band get away with it, having the volume and chutzpah to sell them. Dave looks good and very pumped – wiry and vital. Funnily enough it is ‘Mindfucker’ next, just as it is on the album, and again that is where we see them really click. From then on the band become an indefatigable riff machine as Dave prowls and struts. I’m happy to report that another new track provides a set highlight with a fearsome ‘When The Hammer Comes Down’ easily justifying its inclusion amongst a vicious ‘Negasonic Teenage Warhead’, and an extended and joyously communal ‘Space Lord’. The set is over way, waaay to soon.

Now, ‘Ejection’, ‘End of Time’ and ‘Powertrip’ wouldn’t have been my ultimate choices for encores, but such is the depth of great cuts in Monster Magnet’s big bag of tunes that you cannot complain. And, oh, the irony as 2,000 people finish three days of partying by bellowing “I’m never gonna work another day in my life” during a glorious, spine-tingling ‘Powertrip’ . Thankfully, there’s still the bank holiday to recover, and next year’s Desertfest to look forward to.

The big question I’m left with after Monster Magnet’s triumphant performance is who can they find to match that and fill The Roundhouse with as many crowd-pleasing anthems? Good luck with that; but thanks, for now, for one hell of a festival!