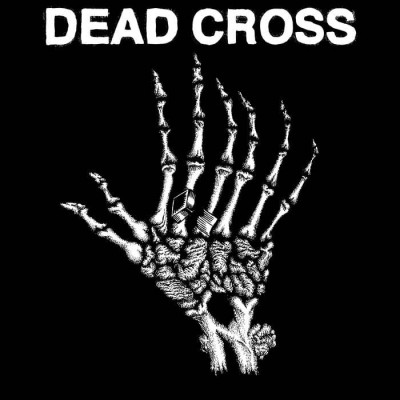 I like surprises.  Of course, this isn’t a surprise any more, but it was earlier this month when Dead Cross announced and released this self-titled EP to follow on from their earlier self-titled LP.  And to be honest, I’m pretty much hoping that all of their future endeavours retain this approach to titling. The previous coming-together of Justin Pearson and Michael Crain of Retox plus Mike Patton and Dave Lombardo was an assault on the senses like no other thanks to the unique traits that each part brought to the party, giving an oldish genre new legs and lungs, and this new offering provides more of the same plus a couple of steps in a couple of other directions to indicate that this is very much a project that is designed to grow and spread.

This new EP is half new, half sort of old with 2 new studio tracks accompanied by 2 remixes of things from their previous record. Starting with the new/new, opener ‘Skin of a Redneck’ shows that Dead Cross have already established a tight working relationship and singular personality, mixing the slower gothic elements with the serrated-edge riffs and layered choral screams, shouts and soul that only Patton can do. It seems more restrained than before, although that term is somewhat relative given that much of the first record was almost constantly full-tilt. It also heralds a much brighter sound overall, each element coming over as both crystal clear yet rust-laden dangerous. ‘My Perfect Prisoner’ pushes the envelope further with multiple tempo changes and a nastier air than we’ve heard before from there, plus a sensory overloading video to go with it.

Onto the new/old side, Three One G labelmates Panicker and Pearson-featuring Planet B are let loose on remix duties. Panicker’s ‘Shillelagh’ is a filthy ‘90s industrial techno reconstruction reminiscent of Coil’s Nine Inch Nails work or JG Thirlwell’s pretty much anything. Planet B’s going over of ‘Church of the Motherfuckers’ is equally filthy in a (generally and relatively) restrained manner, providing a sleazy groove and panicked interludes to allow Patton’s multitude of vocals to really take flight.

As with before, Dead Cross will either fill or clear rooms depending on whose house you happen to pop this on. That’s the whole fun of it; it doesn’t invite “hmm, not bad” opinions, instead it will create lunatic grins or frightened bafflement. Happily for me, now that I live a mere 10 minutes from work instead of an hour or so, it’s been providing a perfect commuting soundtrack which probably also explains my somewhat contrary mood in the office. Not many records get to do that.