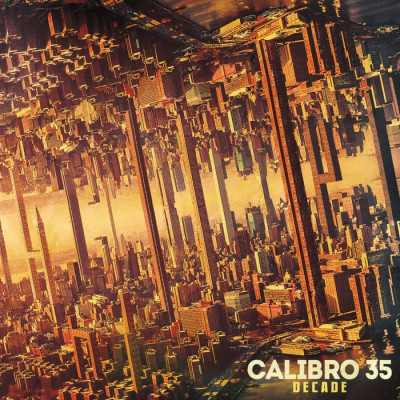 Ten years is a long time in showbiz.  Just ask the editors of this site.  Also celebrating their tin anniversary are Italian Crimefunk collective Calibro 35, who marked this occasion by recording their finest and occasionally strangest album yet.  “Cinematic” is a term oft-bandied about for instrumental acts, but is wholly appropriate here as the band first came together to play stuff (and form their name) from the pulpier, seedier, funkier end of the film spectrum that has seen them carve and occupy a wonderful niche ever since.

From the get-go, it’s apparent that the band have brought (ha!) brought out the big guns for their celebratory Decade release.  Opener ‘Psycheground’ sees the band confidently and selflessly sharing the limelight with a jazzy brass section which sits right on top of the piece throughout, and who also set much of the tone and mood of the album as a whole.  It’s perfect late-night stuff, although I have been known to jump out of my skin when listening to this “suitably relaxed” and the sax kicks in.

The most familiar-sounding track to older fans here will no doubt be the pacey ‘Superstudio’, a funky and fun cut that sees Calbro 35’s comfortable swagger bolstered by sweeping Studio 54esque strings, neatly distilling their recorded output to date in a seamless blend of danceable exploitation vibes mixed with a darker, retrofuturist psychedelic edge.  In this one song, C35 show themselves as being pretty much unique in what they do, as they can turn their identity inside out at any moment while still being completely and utterly Calibro 35.

The collective continue to explore the more unusual edges of film music with their usual sense of fun and funk.  The delightfully-punctuated ‘Faster Faster!’ evokes metropolitan car chases and suspenseful pauses yet adds a weird xylophone motif that reminds me of Jaques Tati (I have no idea why this is the case but I can’t shift the tight now it’s there), and while I’m on the subject of weird and unshakeable reminders, the stern chords and structure of ‘Pragma’ reminds me of Jimmy Smith’s themetune to The Carpetbaggers – albeit in the form more familiar to my childhood self (and I have no idea why my childhood self would have watched this), as the theme to dry 1970s economics fest the Money Programme.  The gentle lilts and swings of ‘Ambienti’ are far less grumpy and  – again, younger-self brain seems to be writing this one – brings to mind a version of The Fall and Rise of Reginald Perrin had the everyman tragicomedy been set in Verona rather than Surbiton.

Decade is certainly on a more jazz trajectory than preceding albums (as its dark psychedelic antecedent S.P.A.C.E. suggested), but it’s still in keeping in their own universe.  This is a record that both celebrates the band’s past as well as expanding on their own legacy to push them ever-further forward.  Of course there’s a foot in decades past, however the other one’s way ahead of us leaving us to sit here in the middle enjoying their work.  Hopefully there’s much more to come.