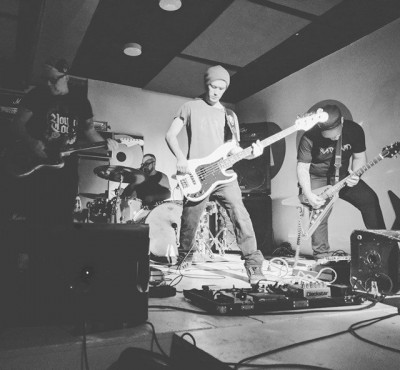 Black Sails for Red Seas on the web:
Website | Bandcamp |

Chasing Giants is the story of our childhood…the dreams of shooting for the stars in paper planes, you know? You may not know how to get there at first but all that you know is that the urgency to be there is real.

Black Sails for Red Seas are a post-metal band from Montreal. A year after their EP release, Wave II, the band have just released their first LP via a new collaboration with Return To Analog Records. We caught up with the band to discuss a little history, influences and to find out more about the new release.

(((O))): To start, can you tell us who are Black Sails for Red Seas? How did the band come together and what’s the story behind the band name?

The band came together in the winter of 2013. We ( G, J & E ) knew each other from our time spent playing in different Montreal bands, sharing stages and many late nights together. There was always great camaraderie between us and when we were in between bands all at the same time, the opportunity finally arose to form our own, on our terms. We locked ourselves in a rehearsal studio for months at a time and worked relentlessly on the tracks that would eventually become the Wave I EP. Having caught the ear of Christian, a recent transplant from France, he was quickly welcomed into the fold due to his strong command of the bass and his quiet, unassuming outlook. Finally, lighting in a bottle!

The Black Sails for Red Seas name is a metaphor based on life. If we consider ourselves as vessels, the Black Sails is the imagery of how we should navigate our individual journeys. Standing tall, strong, and ready for the unexpected. The Red Seas is the adversity that we may face along the way to our personal destinations.

(((O))): With George and James being brothers, how does this change the band dynamic, if at all?

BSRS: Passion is passion and we are very passionate about what we do.

(((O))): What bands would you say have influenced the way you play and write music?

BSRS: Influences can come from anywhere and at any time. Be it from life experience or from what we’ve listened to in the past, what we revisit later on, and what is currently in. Even if it is clearly obvious to everyone in the post rock scene that bands such as Caspian, Explosions in the Sky, and Russian Circles have had a major impact on the musical landscape…we use that canvas as our benchmark while avoiding the pitfalls of it becoming our calling card. Red Lorry Yellow Lorry, The Cure, UNKLE, Cocteau Twins, Kitchens of Distinction, Gorgoroth, Miles Davis, Prince, hell even Kiss…it’s all gravy for us. Influence is relative and shouldn’t be static…good music is good music period. What has always been primordial for us as artists is creating music that moves people on an emotional level be it through atmospherics or head crushing riffs. It’s all about how you interpret and manoeuver your impact. With the chaos around filtering all of those external factors in the studio, that catharsis is Black Sails for Red Seas.

(((O))): It’s been just over a year since the release of your second EP, Wave II. I had the honour of reviewing that release. I found Wave II to be a lot heavier than Wave I. Was that done with intent? What would you say influenced and inspired you to go even further with Wave II?

BSRS: Thank you however the honour was ours! The difference is depth. Having Yannick work his magic at Studio Pavilion Noir on Wave I made us realize we had a great platform to springboard from however we ultimately knew that we couldn’t repeat ourselves on the second EP. In as much as we wanted to explore the more rhythmic aspects of post rock on the first EP, we needed to dig deeper on the second. We needed to illustrate the importance of sway as a counterpoint on Wave II. It’s so easy to fall off the wagon revert back to our primal Stoner/Doom days being tuned to Low B however we countered that by concentrating on rousing the listener on a different level altogether. There’s a quite subversive heaviness to it all on Wave II and that’s thanks to Yannick’s deftness with Studio Pavilion Noir. Our evolution is constant so in a way Wave II is just as much a continuity as it is sum and substance.

(((O))): On April 28th, the band released its first LP via a new collaboration with Return To Analog Records, a record label out of Montreal, Canada. How long has this been in the works and what can fans expect from this release?

BSRS: If it’s one lesson that time in this business has taught us is the importance of “team”. Our approach has always been to ensure that the whole (band, label, studio) is greater than the sum of its parts. As long as everyone in the collective gains in the long run, we’re in. It’s that simple. When we were approached by Fred and Olivier from Deathbound Records, they reiterated the same root to fruit ideology that we adhere to and we’ve had an excellent relationship ever since. The collaboration between Deathbound and Return to Analog came about as a result of exploring new means of distribution through different formats, be it CD, Vinyl or Cassette. Our Rome is being built on one hell of a strong foundation however these things take time and we are very proud to be a part of that. The release of Chasing Giants marks the debut of a Deathbound / Return to Analog affiliation with a promising future ahead of them.

Right from the beginning, we chose to release our music in the form of EPs. Four song Polaroid’s of where we were musically at the time capitalizing on the “All Killer No Filler” mantra from our earlier punk rock days. Our musical baggage is far from being a burden in that we’ve learned to keep things consciously short and sweet. So, for us, the option of using the EP format made more sense in that it indirectly allowed us more freedom in the creation process. Key to the LP was committing the track To the Lions on wax. Prior to closing down, we had the great opportunity of recording the last rock song ever at the famed Studio Victor in Montreal (engineered by one of Muscle Shoals finest). That night, we sent Studio Victor off with a fucking roar!

(((O))): You mentioned it’s been a year in the making. What were some of the obstacles the band had to face to have this LP come to fruition?

BSRS: Design and Concept. We were constantly going back and forth trying to find just the right imagery that would accurately define the now and the imminent as far as musical direction is concerned. Did we want to go down the customary architectural/ nature related covers that others have done? Not really. We came up with some great results using that inclination in the past but that would defeat our current intentions for this release and of those upcoming. As we continue to learn about the devices that we use, the better we become and in turn the better the design. It is as tedious and organic as it is rewardingly frustrating. You don’t have to necessarily go over the edge in order to certify that it’s really there you know? Choosing which tracks would go on the LP was challenging as well. They are all a labour of love really and deserve equal recognition however that can’t always the case. It’s a house of many doors of which not all can be either completely opened or closed at the same time.

(((O))): The cover for the LP is outstanding and the title of the LP, Chasing Giants, is very cool. Who designed the cover and what’s the story behind the title?

BSRS: Chasing Giants is the story of our childhood…the dreams of shooting for the stars in paper planes, you know? You may not know how to get there at first but all that you know is that the urgency to be there is real. Once that urgency takes over, the chase begins no matter what that haven is or what it represents. The conception for the LP was a collaborative effort on all parts. The imagery is all about taking stock of who you are as a band, what you’ve accomplished so far, and what you need to endeavor from there. It marks the transition of our musical perspective and in essence our event horizon.

(((O))): What can we expect from Black Sails for Red Seas in the near and distant future? Will there be a tour in support of the release?

BSRS: For most of the summer, we will be committing ourselves to writing the new EP with hopes of recording in the fall at Studio Pavilion Noir. There’s a lot of new ground to cover and digest so we are allowing ourselves the convenience of time to navigate around that. The heart has but one key and that’s what we aim to be. That being said, tour support will come in the form of gigs in and around Montreal, Ottawa, and possibly Toronto. Dunk! Fest is most definitely an option that we would love to tackle!