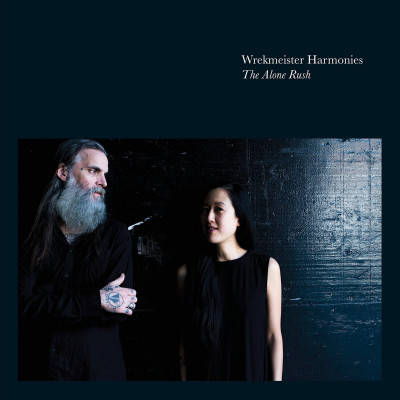 The Alone Rush by Wrekmeister Harmonies

A sharp left turn is a dangerous manoeuvre for a band, no matter how adventurous or broad their palette may be. Wrekmeister Harmonies have forged a unique path since their inception in 2006, drafting in a different band of lauded contemporaries from across the musical spectrum for each release and taking their chamber metal to seldom charted corners of the heavy musical map. For The Alone Rush they’ve hacked their usually generous guest list down to the barest of minimums, with core duo JR Robinson and Esther Shaw only having frequent collaborator Swans’ Thor Harris (providing drums and percussion) for company. They used to record pieces that would last a whole albums length but, while they’d already begun to shrink their average track duration by 2016’s Light Falls, they’re now close to what many would consider regular song lengths. And they’re no longer a primarily instrumental outfit either, with Robinson stepping up his usual vocal involvement to become Wrekmeister Harmonies’ de facto frontman.

That’s a lot of changes to make all at once, especially for a band that has always seemed to value  steady evolution over revolution. The latter of those changes is undoubtedly the tallest of orders – being the lead creative force behind a project does not automatically qualify you to take centre stage as a frontman. And while Robinson makes a decent fist of it the teething problems of this new set up are the source of all The Alone Rush’s failings.

The instrumentation is universally excellent, with Shaw’s exquisite violin playing settling into the more subdued dynamic perfectly. Robinson’s compositional skills are still evident – the distortion has been reigned back but is employed judiciously with a subtlety few guitarists from ostensibly metal backgrounds can quite manage, as the mesmerising ending to ‘Descent Into Blindness’ demonstrates. But the spotlight is unavoidably on his voice and on his words, neither of which have been given much of a leading role before. And these simply aren’t as strong as the music that backs them. His range is limited but he does possess a pleasingly creaky and weary baritone and is rightly wary of staying within its limits. But lyrically he comes unstuck entirely. On ‘Covered in Blood From Invisible Wounds’ his cadences are reminiscent of Scott Walker’s channeling of Jaques Brel, but the charming swagger or suggestive smile is missing. Instead he remains relentlessly sour faced, his lyrics a ceaseless parade of grim imagery and miserablist musings that lack the crack to let the light in.

“The blood the gore the flesh comes raining down upon me”
“The dogs of war are outside my door baring their teeth”
“All the children who lost their sight cry, “just a sip of water mister please”
“The ancient light in the underground/ the cold was fierce it pierced right through me and I died without a sound”

The litany of unconnected sad and harrowing images are almost parodical, a jesting mimicry of sadsack singer-songwriters. It’s sounds superficially similar to something Nick Cave & the Bad Seeds may have penned, only drained of all the wry humour and wit like a calf strung up to bleed. A metaphor that would fit into a song from The Alone Rush all too neatly.

Robinson and Shaw retreated to Oregon for this record following the death of a family member and the emotionally draining experience of caring for another relative suffering from a chronic illness. You can hear that sadness, that exhaustion, in every shimmering chord and in every aching bowing of the violin. You can hear it in Robinson’s cracked croon and Shaw’s soothing, sighing backing vocals. But it’s absent from the words. Given that back story and the band’s track record of excellence its not an enjoyable thing to admit but Robinson is much, much better at expressing himself through the language of music, so much so that the prominence of his vocals on the record feels almost like sabotage. Given the dramatic shift in styles The Alone Rush already feels like a band fighting with one hand tied behind their back – Robinson’s choice of remodeling himself as murder balladeer feels like chopping the other hand off altogether.

There is much to enjoy here – the cathartic, exultant end to ‘Forgive Yourself and Let Go’, the sumptuous violin/accordion/guitar arrangements of ‘Descent Into Blindness’, the entirety of the title track where the stylistic shift comes tantalisingly close to making sense – but if this is to be more than a momentary diversion on Wrekmeister Harmonies’ path then there’s a lot of work to do. “There’s a realization, a moment of perfect clarity that comes from meditating on these ideas,” Robinson said of writing the album, “and that is, at the end of it all, we are perfectly and utterly alone.” A simple and unavoidable truth that we all must face sooner or later. But it takes something more than stating the facts to create something sublime, to transubstantiate the tragedy that final realisation into art. Robinson has done it before, in the kiln like heat of his brutal, majestic compositions, but if he wants to sing that sorrow under his new guise he needs to discover a language that will facilitate it.