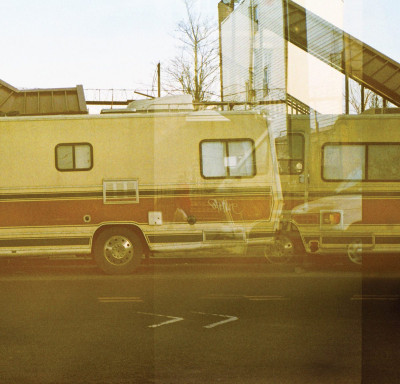 I was walking through the Oculus. It is the newly constructed grand hall and train station built on the ashes of the world trade center in NYC. It is very white. If you saw John Wick 2 then you saw parts of it in the protracted subway fight scene between John Wick and the rapper Common. None of this matters, of course. What matters is I was walking though the hall, surrounded by a million dour faced commuters, but I’m grooving to some sick riffs thinking “damn…this is right on! But…I don’t remember this Sleep song…” Then there was a period of vocals and it occurred to me that it wasn’t Sleep at all. I quickly checked my phone to see what had made its way into my ears. It was River Cult’s Halcyon Daze.

Folks, you can pretty much stop reading right here. If you are a fan of Sleep or any of the numerous other stoner rock/metal bands that have made the world a much much better place, you need to put Brooklyn trio, River Cult, into your lexicon. If I mistake one of their songs for a Sleep song, you know that shit is aaaaaal right.

Their debut album, Halcyon Dayze is for the most part stoner metal, but has some forays into other genres too. There are five songs on the album, and it clocks in at 42 minutes; the songs are long and often have several movements. The mood is appropriately hazy and dazy, pretty much what is advertised in the record’s title, heavy, slow, plodding, chock full of big riffs and fuzzy guitars. However, the band also has an experimental bent as none of the tracks follow any traditional song paths. The band seems as at home exploring spacy psychedelic soundscapes as they are destroying mega riffs.

The standout track to me shares its name with the album ‘Halcyon Daze’, is an excellent trip into psychedelic heaviness, that ends in an unusual and pretty psych drone.

Sean Forlenza’s vocals and guitar work are super solid throughout. He’s got an exceptional voice. His guitar work is hypnotic and never boring. He’s complemented by Anthony Mendolia on bass and Tav Palumbo on drums, also both excellent musicians.

If there is one criticism I would make of the album it is that there are moments when I couldn’t help but want more riffage from the bass to complement the guitar.

That said, the album is very consistent throughout. There are no bad songs or areas within that are boring or make you want to skip to the next track. You can put the album on, sit on the couch, light up and pretty much just let the music take you away.

All in, this album is highly recommended especially for fans of bands like Sleep, Kyuss, Weedeater, and Pentagram.