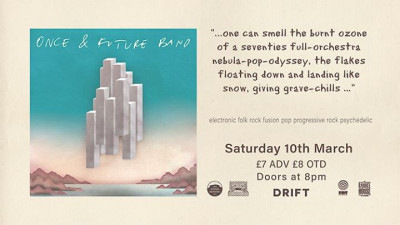 Once & Future Band at The Barrel House

Naming yourselves Once & Future Band suggests an affinity with the “Matter of Britain” and the folk legends of this isle. That said, one wonders to what degree the idiosyncratic nature of English towns is apparent to a troupe from Oakland, California. Either way, Totnes welcomes the touring party with a reception typical of the left-of-centre West Country settlement. The audience are receptive although, in many cases, they’re also late. Perhaps unsurprisingly, then, it takes the quartet a little while to warm up on a cold evening, which is a shame, as opening duo ‘Old Brain’ (a psychotic tune with personality taken from the band’s new EP) and album opener ‘How Does It Make You Feel’ (their most bombastic moment) both lose out sonically and arouse only a mild reaction as a result.

Where these two numbers do succeed is in pinning Once & Future Band’s colours firmly to the mast. Theirs is a proggy, psychedelic, retro sound that owes a debt to The Beach Boys and The Beatles, amongst other 60s touchpoints, whilst their 70s sound-alikes include Steely Dan and Supertramp. It’s big, bold and poppy for what is often little more than a power trio, led by Joel Robinow’s keys and backed up by Raj Ojha on drums and dramatic, melodically fluid basslines from Eli Eckhert. Whilst there are vocals all over the album, tonight these are buried in the mix, whilst Raze Regal’s guitar is applied sparingly, often picking out individual lines or sprinkling jazzy triads over the groove.

From the on-the-beat funky soul of ‘Rolando’ onwards, things pick up. The live mix now tweaked to the venue, and with a rapidly expanding audience, Once & Future Band up their game and win over the new arrivals with ease. Robinow is a lively keyboardist and the ensemble tightly navigates time changes, stitching together sections to give their compositions their vitality. If guitars are few and far between, guitar solos are an even rarer inclusion. Regal waits until ‘Tell Me Those are Tears of Joy’, a song with a memorable refrain, before indulging himself and marking out his laid back, languid playing style as selective, rather than lazy. ‘I’ll Be Fine’s’ melodrama is accurately conveyed, and the LP’s closing couple, ‘Magnetic Memory’ and ‘Standing In The Wake Of Violence’, are two gig highlights.

Once & Future Band have the crowd on their side tonight, but can still grow from here. Not all the material is as good as the band’s strongest songs, and one suspects a second album would add to their song writing arsenal and improve live sets by virtue of greater choice. Whilst Robinow’s keyboards dazzle and Ojha’s sympathetic, jazzy drumming drives group forward, it’d be nice to hear more contrary motion between the guitars and bass, which often seem to move in the same direction at once. For all their growing pains, Once and Future Band are a novel quartet that blend yacht rock and patchouli groves as only a band from California can.