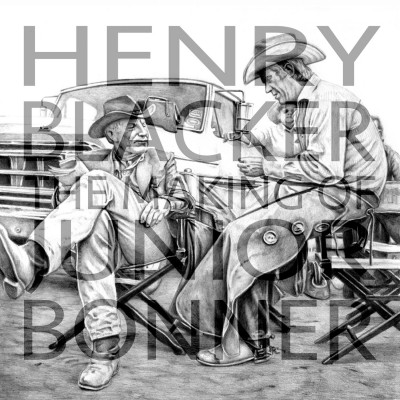 The Making Of Junior Bonner by Henry Blacker

Henry Blacker is the Somerset based half of the mighty Hey Colossus. It’s what they do while the other three are swanning about being part of the metropolitan liberal elite or otherwise enjoying big city entertainments unavailable in the rural west country. The Making of Junior Bonner is their third album and it lands with a pleasingly dirty, heavy thud. Like something it’s taken the two of you an hour to drag out of the woods and up a muddy bank finally dropping into the boot of your knackered four door. It smells a bit of spilt diesel and woodsmoke.

It’s not a massive departure from their previous two albums and like them both it’s excellent, uncomplicated, shit-kicking fun. If you’re quick you can get a free CD of their first two with it, astoundingly good value but the sort of thing that makes me ruefully shake my head. How are any of those left lying around the Riot Season office? How are a band this great not more widely beloved? It’s a sackload of riffs and great thick fuzzy guitar, irresistible forward motion. If you like Hey Colossus but you’ve not checked them out you’re really slacking – imagine if ‘Hot Grave’ was a band.

They get called stoner rock and compared to Queens Of The Stone Age a bit more than they’d probably like and, yeah, you can hear it in the opener ‘Cag Mag’ a little. Still, if Queens are blasting out across the desert in a shiny corvette full of misplaced self belief Henry Blacker are more like a fight in the car park of a carvery that ends with everyone making up and buying each other drinks until closing. They’d have sat comfortably on the bill between Tad and Nirvana in 1990, or USA Nails and Casual Nun this summer. You get the idea, dirt simple noise rock with chunks of punk and metal sticking out of it, they’re absolutely great.

Their recipe is not fancy or overly complex but they do vary it, ‘Two Shapes’ is a full tilt rager with a great false ending. ‘Keep It Out Of Your Heart’ is almost a pop song buried beneath the sludge and appears to be about resisting the toxic ideas in some newspapers and mainstream discourse “Keep it out of your heart, keep it out of your mind and your mouth”. A certain, roadside-ketamine-death of a personality comes to mind. Tim Farthing’s vocals switch between a submerged affectless drone and a fierce roar in occasionally disturbing schizophrenic fashion that make his words hard to pick out but when you can they’re usually great.

There’s nothing here as immediately funny as ‘Shit Magus’ or gut punchingly moving as ‘Summer Tombs’ off the last album and the general mood is of dark tales sometimes at odds with the upbeat music. ‘Shingles To The Floor’ is another charging rocker with a deceptively sweet chorus buried in it and finds him driven by guilt to suicide “I did a dreadful thing, and now I’m going to swing, up from the attic beam”. On the very next tune the violence turns towards an abusive cellmate “last night I murdered my cellmate, strung him up with his sheets” over a slower more doom soaked riff. I’m almost 100% sure this isn’t all autobiographical.

Not content with all the impressive guitaring, singing, growling and songwriting Tim once again provides the artwork which gives the album its name (he’s probably great at pool and a really good cook too, sickening really). A startlingly accurate pencil rendering of a photo of Sam Peckinpah and Steve McQueen on set during, well, the making of Junior Bonner. It’s not clear if it has much direct bearing on the record’s contents but… Junior Bonner was a film that ruefully looked at the fading American west. It was Peckinpah’s next film after Straw Dogs, which featured some dark and bloody doings down in the west country. Surely such elegantly drawn parallels must be more than serendipity.

On ‘The New Evil’ they get an impressively metal swagger going, a thread that peaks on final track ‘Little Lanes’ with a double shot of Iron Maiden in its galloping opening, but Maiden if they’d been left out in a field for years, Rusty Maiden. It may or may not be about poor phone reception in Somerset but they get a great groove going before heading back over the field into the night. Seriously now, buy this record and tell your friends because they deserve your love.