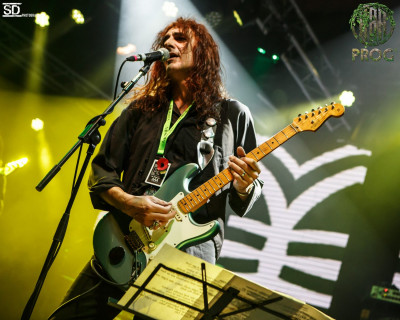 I will only tell you this: birth, life and death. But they are not the themes. I’m just giving you a trio of things you might want to hang a hat around. Or a staff, or a Tardis key, or anything you want, really. . .

Hawklords blend experience from the 70s and 90s line-ups of Hawkwind, alongside The Bevis Frond’s drummer and young, dynamic bassist Tom Ashurst. We caught up with the band’s two elder statesmen, guitarist/vocalist Jerry Richards and keyboardist/vocalist Harvey Bainbridge, to discuss their rich history, a brand new album and the future plans of this psychedelic ensemble.

This interview has been published completely unedited to better give a feel for the idiosyncratic, hilarious and personality-filled style of the duo.

Jerry: (Adopts mock portentous voice) Hello. We are now running. This is a transmission from earth. We are calling anybody and everybody. We are the Hawklords. My name is Jerry Mandarin. And (this is) Dulux Bainbridge.

Jerry: So work that out if you can, folks, we don’t mind.

(((O))): I feel at this stage I should point out that this interview is being transcribed, so no-one will be able to hear your voices.

(((O))): Let’s start by going back in time. Harvey, you were in the original line-up of Hawklords, along with Dave Brock and Robert Calvert in the 70s. Do you have any memories of that period?

Harvey: What stands out for me is Robert’s genius, really, at that period. And the fact that you could come up with a tune and within moments he’d have lyrics for it. And not any old lyrics, but lyrics that were meaningful. He was just a fountain of words, he was a proper wordsmith. I tell other people this story about him. When we were rehearsing, we would be playing away and he’d be striking poses – just standing there in the room. I asked him “what are you doing, Bob?” to which he replied, “I’m rehearsing! Rehearsing striking a pose!”

Jerry: Professional, you see. Totally professional. Whilst the band is playing gypsy music.

Harvey: He’d be going (sings) “ho” and then “ha”, tearing newspapers in half, saying “I am a manwolf, I am a werewolf”, you know.

(((O))): That era produced some great music. I was lucky to see Krankschaft last night, who also played with Calvert.

Jerry: I know he is, I know he is. Jolly good. Are they still on site? It’d be good to catch up with him. [It turns out Krankschaft had been “broken” by the HRH crew party the previous evening.]

Jerry: We are. We very much are. The thing for us is, as you say, the ongoing Nik/Dave saga, which will never stop – they are completely like two old warhorses stomping around each other.

Jerry: It seems to be that. It’s an eternal struggle of positive and negative, yin and yang, up and down, left and right, back to front, you know, it’s all of that sort of stuff, really. But Harvey and I, vicariously through channels, have sent our congratulations to Dave about his recent album they had out, The Machine Stops, I think it’s called. And it was nice, and we were really pleased to see it charted well for them and hung in the chart for a little while; and he’s had a nice resurgence with his craft and I’m really pleased for him that that’s happened.

(((O))): They’ve done another album since then, Into The Woods. One thing both bands share is you seem to be really prolific. You had Fusion in 2016 and and Six late in 2017. Tell us a little bit about the new record.

Jerry: Six is dark. It was going to be called “The Deep Six” but that was a little too bleak even for my black heart! And I have a heart of pure obsidian as anyone who knows me well will tell you. You need to be here for the voices, guys – that’s the thing!

It’s a collection of snapshots, really, about people. Some people we know. In a way, it’s kind of autobiographical. And some of it, for a sci-fi/fantasy band, is a little bit more real than we would usually venture, in some ways. There’s no real politics involved in it, other than the general eco-politics of life on planet earth in the 21st century. But whilst there are elements of darkness in there, there’s lots of reaching for the light: hope must endure. And whilst hope endures, there is a future for mankind, and for us, people, around the table. We must always have hope, no matter how bleak it gets. In journalistic terms, it’s a little bit more “commercial” in inverted commas.

Harvey: More by accident than design.

Jerry: It’s been commented on by various people. There’s harmony singing on it, you know. The songs move, don’t they, they’re proper songs. It’s good construction – the compositions, we feel, are pretty strong and they have a general direction to them. We made the record to be only 45 minutes in length so we could issue it on vinyl. Obviously you can only get so many minutes on a piece of vinyl, so it’s 45 minutes long, we were slightly limited by that. But the live arrangements of the performances are going off on tangents now and really spacing out. We left ourselves a lot of room with it to do that within the live forum.

(((O))): Six seems to have more of an analogue feel to the recording, compared to some of your recent albums.

Jerry: We wanted it to sound like some of the best recorded albums from the 1970s, when they were using analogue technology to its very, very limits. And now, of course, we have ProTools rigs to record on – Harvey’s got one, I’ve got one. And we’re able to exchange files over the internet, which is really handy. Because we live all over the country, the band is really difficult to get together in any one place at any one time. So when Harvey and I write and record together, we largely do so separately and then upscale the whole thing and take it into a studio and record it properly. That’s the next time “the band” comes together. Then obviously we go on tour and we’re with one another then. How long have we been out, this time?

Jerry: It’s a long tour for us, this time.

(((O))): You were talking about the themes on this album. Can you elaborate on where the trilogy is going to take us?

Jerry: I will only tell you this: birth, life and death. But they are not the themes. I’m just giving you a trio of things you might want to hang a hat around. Or a staff, or a Tardis key, or anything you want, really.

(((O))): What’s happened to Ron Tree? He’s not on the new record and he’s not performing with you on this tour?

Jerry: He’s just not here. He didn’t make himself available. He has other things to do.

(((O))): You’re here playing a prog rock festival. Do you consider yourselves to be a prog rock band? What’s your relationship with that genre?

Harvey: Personally I don’t consider us to be a prog rock band; I think we’re more of a psychedelic rock band.

Jerry: This lot’s sounding more like an acid rock band from the 1960s.

Harvey: It is! It’s very powerful, sounds very big and it moves along at a fair rate. But it’s not a prog rock band as in “also known as Genesis”; I can’t think of any of the others that do it note for note.

Jerry: A lot of it, what we’ve done is left ourselves a lot of rope for the live performance. We usually do a two-hour set. People that have come to see us say “it felt like only half an hour”, thanks to the genius of Dave “Lighthouse” Johnson, who’s designed a whole brand-new light show, this year. Again, every year, it’s new and he’s got some fantastic things going on. We can only turn around occasionally to see what’s going on, because of course you can’t play and watch the light show at the same time. I wish I could. I’ll have to get mirrors on my sunglasses and then I can watch what’s going on. When you see what he’s doing, people are standing there with mouths open; and at times on this tour, we’ve got to the end of a song and you can hear a pin drop in the room, ‘cos they’re not sure it’s over. They’re watching the light show and there’s something big going off behind us. We don’t know what it is. Then you say “thank you very much, ladies and gentlemen”, and the spell is broken like that, then they’re off, you know.

Anyway, we’ve given ourselves a lot of wiggle room to expand and extend – there’s a lot of improvisation. A lot of the wordplay, and all the poetry you’re hearing, that’s made up on the spot. So it’s not rehearsed, and we’re very keen; we have a tradition of doing this. When Robert was working with us, he and I would do this all the time. I’d start something off, he’d come in from an oblique angle, I’d come from another one, he comes back again, so you get this feed going on. Now with ‘Whisperer’s Downfall’ Harvey’s doing a different kind of monologue every day, making it up; I’ll have interjections, and it comes out completely naturally; so it’s a Dada approach to a formatted rock band. So strange things are afoot, listeners. [Laughs maniacally].