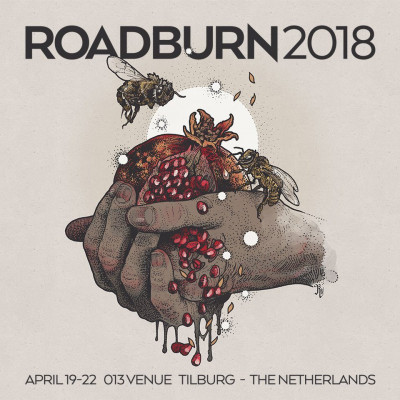 Next week it is finally happening! Thousands of Roadburn Festival enthousiasts will be getting into Tilburg for their annual pilgrimage. With over 100 brilliant acts playing the festival this year it would be impossible to to make a fair selection of bands/artists you should definitely see, and much of the Roadburn experience is all about wandering about and seeing great performances of bands and artists you weren’t initially planning to see. But to make things a little bit easier, Benjamin Bland and Sander van den Driesche have highlighted 5 performances each which we think should be pretty special to watch at this year’s festival edition.

There’s no easing yourself into Roadburn this year, with the Waste of Space Orchestra lined up to open the main stage. The festival organisers have specially commissioned two performances this year, of which this meeting between Oranssi Pazuzu and Dark Buddha Rising is one (the other is Sunday’s Icelandic black metal collaboration Vánagandr: Sól án varma). Oranssi Pazuzu have provided mind-melting highlights of the last two Roadburns, and Dark Buddha Rising are hardly likely to make things any easier on the brain. This ten part, hour length performance is a conceptual composition that comes with original video accompaniment. This will be unmissable.

Just in case Waste of Space Orchestra wasn’t exciting and unique enough, Thursday night’s two-hour journey into Future Occultism should do the trick. Formed of three performances, this epic set promises to point a unique way forward for heavy music in the age of hyper-technology. Phurpa (late replacements for Phuture Doom), the mysterious Russian practitioners of authentic ritual Buddhist music, will showcase the spiritual power of vocal performance. Sonic terrorists Servants of the Apocalyptic Goat Rave will provide a glitchier, darker vision. Finally, legendary breakcore pioneer Bong-Ra will offer an entirely new take on ancient rites. It’s almost impossible to predict precisely how all this will sound, but that’s what makes it so exciting.

Boris have, of course, become true legends of the metal underground over the last two decades. Back in 1996, however, it must have been something of a shock when this unknown Japanese trio released Absolutego. This titanic exercise in drone has few peers, which is probably why Sunn O)))’s Stephen O’Malley has agreed to turn up in Tilburg this April to help Boris recreate this classic album. Expect the most powerful wall of sound you have ever heard. This is one of those unique album-in-full sets that is genuinely unmissable.

Thou and The Body are both oppressive enough on their own. Together they push their respective unique takes on sludge into spectacularly devastating territory. This is the first time the two acts have played together in Europe, and it promises to be the most uncompromisingly punishing set of the whole festival. I’ll be keeping my fingers crossed for their soul-destroying cover of Vic Chesnutt’s ‘Coward’.

Justin K. Broadrick has been something of a Roadburn regular since Godflesh reformed – and Godflesh are playing Selfless in full on Friday night – and last year it was Kevin Martin (The Bug)’s turn to grace the festival alongside Dylan Carlson of Earth. This year long-term collaborators Broadrick and Martin bring their recently unearthed Zonal project to 013’s main stage. Alongside the brilliant Camae Ayewa (Moor Mother), Broadrick and Martin promise to pick up where the pair’s much-missed Techno Animal project left off. It’s hard to imagine that the one Zonal release to date – 2000’s obscure The Quatermass Project, Vol. 1 – will be much of a guide to this set, but similarly high quality levels are inevitable.

For the majority of Roadburn fans Motorpsycho doesn’t need any introduction, but for who has no clue as to who they are, just check out their enormous back catalogue which spans nearly 3 decades, and really shows the evolution this band has gone through to become the progressive rock powerhouse they are today. Motorpsycho is simply one of the best live bands you will ever see. Fact. Just listen to any of their Roadwork live releases, which are all outstanding. With new drummer Tomas Järmyr, who has played Roadburn previously with his other bands Zu and YODOK III, nothing but two spectacular hours of psychedelic, progressive, stonery rock can be expected. They will no doubt play a lot of their latest album The Tower, but hopefully also a bunch of Motorpsycho classics.

After the lengthy conversation I had a few weeks ago with Dave Sweetapple (read the interview here) to talk about the San Diego Take Over, I got pretty damn excited to catch as many San Diego events as possible at Roadburn. Basically, the majority of the San Diego stoner/psych scene are flying over to Tilburg to play various sets, either as their own bands, or in collaboration with others. Of course, Earthless is the big attraction here, with them being this year’s artist in residence, but don’t miss out on seeing bands such as Sacri Monti, Harsh Toke, JOY, Petry, Arctic, Pharlee, Red Octopus, or Volcano, with the latter being a complete surprise as no music has been released by this super group to date. There will be art, videos, crazy skateboarding stunts, and lots and lots of weed, which will no doubt result in some unexpected surprises and collaborations.

Hugsjá is Enslaved’s Ivar Bjørnson and Wardruna’s Einar Selvik, and for the first time ever they will perform their latest collaboration Hugsjá outside of Norway. Read that sentence again, and just ask yourself if there’s going to be anything more special at this year’s Roadburn than this? Well, in my opinion there isn’t. The combination of Norse and Norwegian poetry, accompanied by various traditional and more modern instruments is going to be the perfect Main Stage performance on Saturday afternoon. If you were lucky enough to be at Roadburn in 2015 to see the Skuggjá performance, you know what to expect. This is going to be brilliantly mesmerising, and nothing but spectacular.

Panopticon is the project by Austin Lunn, mixing black metal fused with traditional Appalachian folk music, creating a very interesting take on this extreme metal subgenre. Until very recently Panopticon has been a studio project only, but last year they made their live debut and they have played a very selective few live shows since. It is therefore quite a unique opportunity to see Panopticon live at Roadburn, where he will play 2 different sets. On Friday at Het Patronaat they will perform selected songs from a new double album entitled The Scars of Man on the Once Nameless Wilderness. And on Saturday the band will perform a selection of the band’s entire catalogue on the Main Stage. Both shows aren’t to be missed if you want to witness something quite special.

On Saturday at 13.00 at V39 Austin will also join Ben Handelman from Black Metal & Brews to talk about black metal and beers. Register for this free event here.

SÓL ÁN VARMA (Sunday, Main Stage, 15.10)
Ben has already highlighted the Waste of Space Orchestra above, but the second of the specially commissioned performances for Roadburn 2018 will unite the might of Iceland’s black circle (Misþyrming, Naðra, Svartidauði and Wormlust) under the banner Vánagandron on Sunday. Over the last couple of years Icelandic black metal has featured quite a bit on the Roadburn line-up, and anyone who have witnessed these shows in the past will no doubt be extremely excited to be able to witness this spectacle on Sunday. Two years ago Misþyrming performed Úlfsmessa at Het Patronaat as part of their artist in residency at 2016’s edition, which was a very memorable performance, and this year’s Sól án varma will be nothing but spectacular. Get yourself to the Main Stage in time as this will be visually as exciting as it will be aurally.

These are just some recommendations on a hugely brilliant line-up. Don’t get disheartened when you won’t be able to get into the Cul de Sac or the Green Room or Het Patronaat if these venues get too full. Go and do something random. Walk into a different venue to see something you weren’t planning to see and you might be very pleasantly surprised. Also, don’t forget about the smaller acts. See Hair of the Dog at Cul de Sac on Saturday night, they’re an amazing live band. Or Une Misère from Iceland, who play to different shows (Thursday at Cul de Sac and Saturday at the Green Room). Don’t miss LLNN at Cul de Sac on Sunday. Catch something more experimental, like Ex Eye at the Green Room on Thursday. I could go on and on and on. Whatever you’ll end up seeing, you’ll have a blast. That’s pretty much guaranteed!