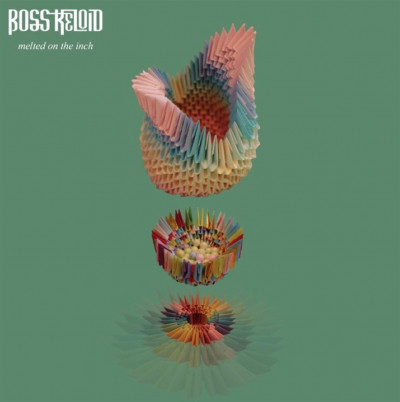 Melted on the Inch by Boss Keloid

I was first introduced to Boss Keloid in a boggy field on a chilly, damp Sunday morning at ArcTanGent in 2017. I’d been aware of the band for a while and enjoyed their second record, Herb Your Enthusiasm but it was when I saw them live I really ‘got’ the band. Their album could just be seen as a great big slab of stonery, sludgy metal, but actually there is a lot more to it. Thunderously heavy, it is the musical equivalent of being grabbed by the scruff of the neck! But actually, under the heavy exterior is deep, complex and multi-layered music.

The bands third effort, Melted on the Inch, is similar in this respect. The first track (released as a preview) ‘Chronosiam’ signalled a similar album to the previous one. After listening a few times it becomes obvious that rather than being more of the same it is rather is an evolution of the band’s sound. The track opens with organ-esque guitars, thumping drums and vocalist Alex Hurst gravelly howl with familiar changes in pace and feel. Anthemic in places, calm in others with a groove that runs through the whole track. ‘Tarku Shavel’, in contrast is more chilled in its feel with a noticeable drop in tempo. The use of organ softens and adds melody to the hard rhythm section. It’s still far from chilled psych, but the wider influence and maybe even calmer feel of this album is evident. I can’t help of thinking of System of a Down, maybe because of the Middle Eastern feel of some of the parts and reinforced by the liberal use of changes of pace.

It’s impossible to dissect all of the parts here, well it could fill a book (albeit one with a limited appeal!). I do wonder what the track names mean, Google leads nowhere making me think they are just made up words. I have seen tracks just as numbers or letters and I guess they have to have something, but making up words seems a lot of effort. The third track ‘Peykrue’ is again chilled, off-kilter in places but has a 70’s psyc/prog feel to it. Swarbrick shows of his guitar repertoire with some ‘lead’ guitar, in the traditional sense.

‘Jromalih’ has a almost English folk sound to its opening, evoking a feeling of hazy summer days. The one thing Boss Keloid do is never become predictable, just as you are relaxing into this groove a heavy swell of noise sneaks up on you and before you know it we’re back to that chilled vibe again. The band do this well though, it doesn’t sounds disjointed or thrown together as it blends seamlessly.

Trying to bend my head around all this I spoke to a few of the other members of the Echoes and Dust group (as one thing you can be sure of is the depth and breadth of musical knowledge is stunning, to say the least), as I wanted to try to understand the band’s influences and direction. The conclusion being that it isn’t one thing or the other, rather a band that’s growing and developing. They are adding progressive and heavy psych elements whilst to their sound whilst maturing. Delving into the back catalogue it becomes clear that this is a bunch of guys on a journey, broadening their horizons and songcraft and bringing their wide influences into their music whilsts retaining what made them a good band in the process.

‘Lokannok’ has a forlorn feel to it, heavy emotionally and contrasts with some of the happier feelings of the earlier tracks. Hurst vocal range is really shown off hear, I’m reminded of Serj Tankian, Phil Anselmo and Chris Cornell, all in one track. It takes a powerful set of lungs to compete with the dense slabs of sound but he manages never to get lost in the mix. As a kind of book end, ‘Griffonbrass’ had a similar feel to the opening track the sludgy guitar riff carries the song along before falling away to an organ followed by a fantastic, almost symphonic crescendo.

One note on the album, the production is fantastic. The band’s dynamic must be tricky to capture on record, considering both the intensity of the live show and the aforementioned depth, but the production pulls out both the subtleties and manages to still retain the muscular intensity. The drums are strong and clear.

Melted on the Inch is an evolution and a worthy successor to Herb Your Enthusiasm. the band have grown and expanded their sound. It does take a few listens to fully appreciate, however, the more you listen the more the album grows on you. ‘Chronosiam’ and ‘Griffonbrass’ are stand-out tracks, robust and muscular with hints of melody. Highly recommended!