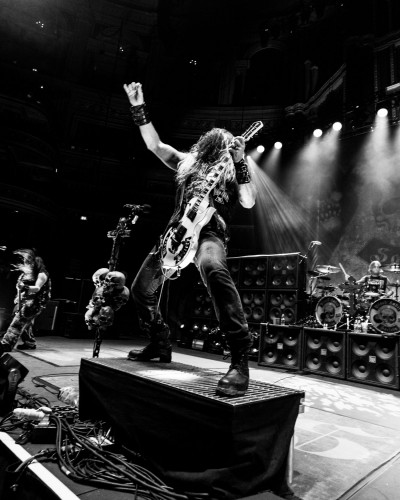 Playing the Royal Albert Hall – a magnificent concert hall in Central London, opened by Queen Victoria in 1897 – is a big deal, regardless of your views on the monarchy.

Despite hanging around at doomy, stoner-rocky type places for a number of years, I haven’t yet managed to catch Monolord, Gothenburg’s mighty power-trio, and there’s few places better or more incongruous to do so than in one of the UK’s grandest venues. The hall’s moderate standing area is half-full at this early point in the evening, with much of the sweeping seated areas looking healthy despite a few queues still in progress at the many doors which surround the building. While essentially any metal band is technically suitable support for a band whose guitarist is so closely associated with Black Sabbath and Ozzy Osborne – because essentially every metal band has taken influence from them, whether they know it or not – Monolord are a good fit alongside Black Label Society. They have the huge riffs, of course, big enough to fill a 5,000+ capacity venue, but it’s the vocals of main man Thomas Jäger, in particular – strong, melodic and treated with just the right amount of chorus and delay – that compliment those of the main event. Their stage is smaller than for BLS, yet still pretty wide for a three-piece, but they fill it amicably, helped somewhat by a mighty, Orange backline. The distinctive artwork for their latest release Rust – iron oxide infused automobiles poking out of desert sand – projected behind them seems wonderfully incongruous in such an opulent Victorian hall. I’m drawn to their bass player who – unrestrained by a mic – is free to jump around, raising his left hand high whilst executing hammer/pull off trills with his right, before slamming his thumb into the strings again for the main riff. 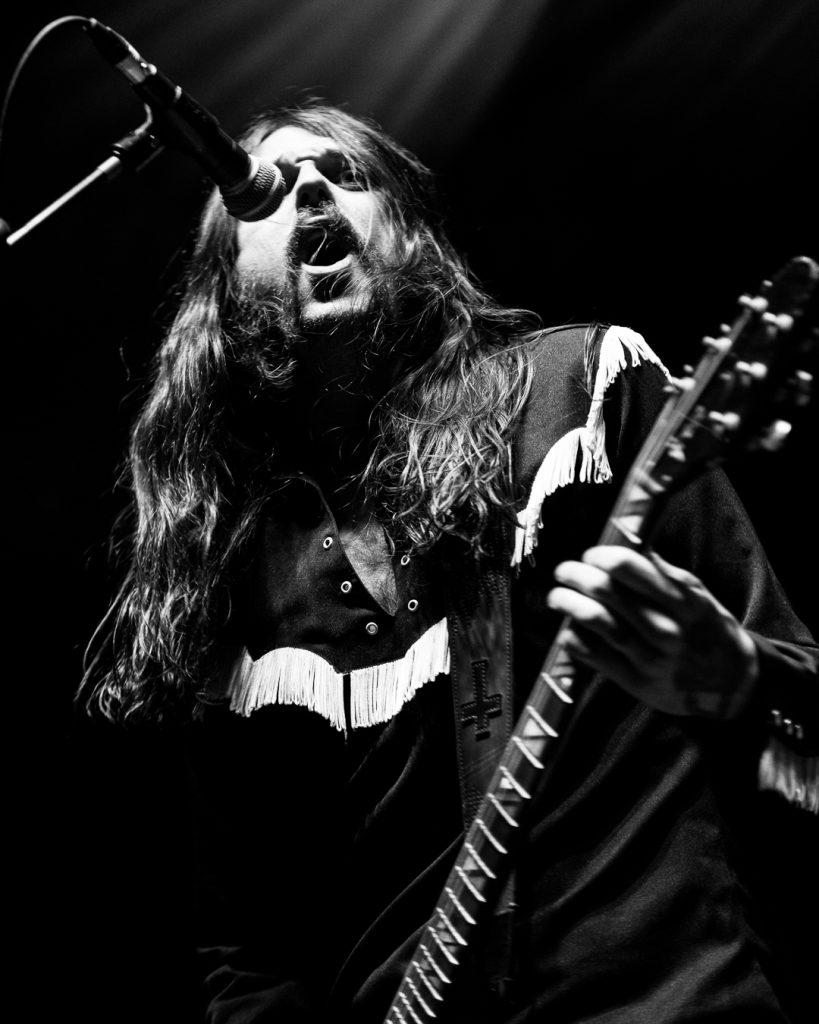 Closing track ‘Empress Rising’, the title track from their 2014 album, is a stand-out moment for me. Beginning with flange-drenched guitar chords, there’s a moment of silence on-stage when the lights and massed horns go up, and everyone takes in the grandiosity of the steeply raked auditorium, before the main riffs and vox kick in. In case Monolord haven’t already twigged it, it’s moments like this – with a by-now significantly larger crowd going bat shit in a venue where countless music legends have played – that prove they’ve got a good thing going on. Trudging through riffs so viscous you expect the band to gloop down into the stage like a melting T-1000, Monolord end this 12-minute epic with an interstellar rush of pentatonic wa-wa soloing, with the bassman almost losing his guitar from throwing himself around enthusiastically.

Monolord may not win many prizes for originality – you can tick off their components from across the doom spectrum, especially toward the 1970s end – but their songs are so strong and their sound so well-crafted that they make for a reliably listenable band, one that you’ll return to again and again. Which is no doubt exactly what many people here tonight will do when Monolord return to London to play the Roundhouse at Desertfest next month: Sunday 6 May, 2018, 3pm – see you there. 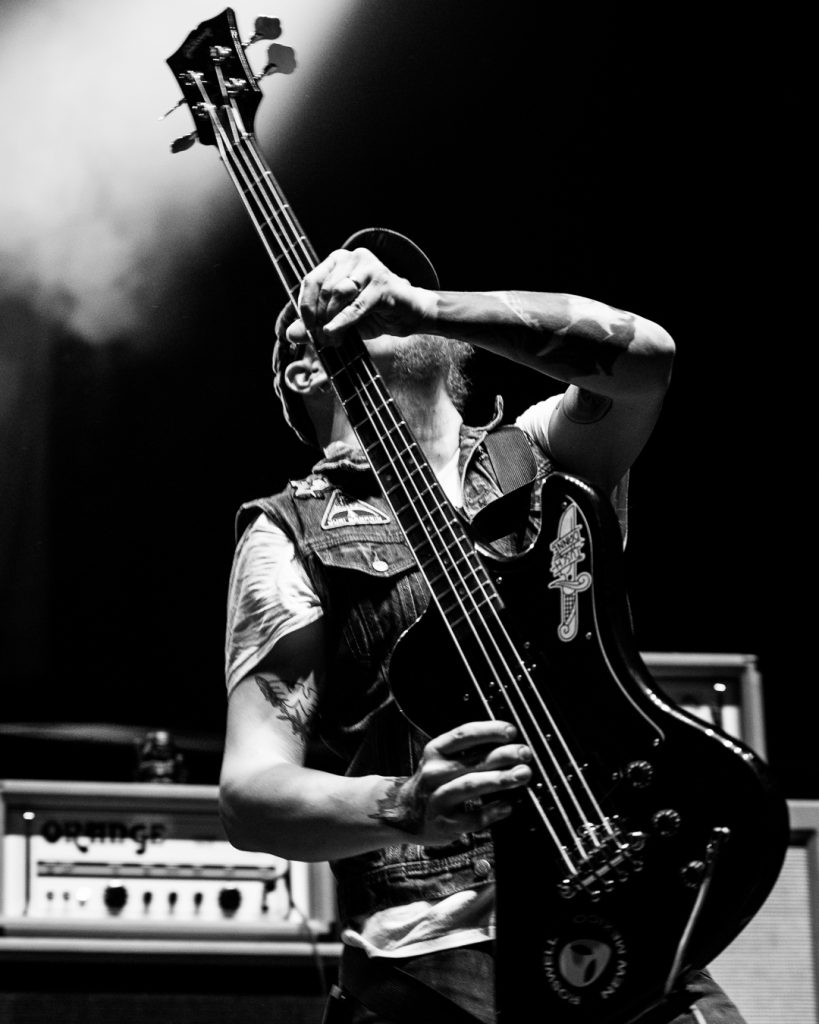 When the classic rock playlist restarts for the interval and the giant BLS banner goes up there’s absolutely no prizes for guessing what follows. Amongst some choice cuts from AC/DC and Soundgarden, it’s the lacerating opening riff of ‘I’m Broken’ that gets the biggest audience response, causing many carefully maneuvered pints to spill onto denim sleeves. Playlist Guy ratchets up the excitement to fever pitch with the now familiar opener, a Black Zeppelin mash-up of ‘Whole Lotta Love’ and ‘War Pigs’, while Zakk, still hidden, assembles himself on his podium. When the banner finally drops (causing the photographers to scuttle out of the way below), the ‘Genocide Junkies’ riff kicks in through a total of 28, 4×12 speaker cabinets, the confetti cannons are shooting, and the hairy beastman himself is unchained and frenzied, you remember that – despite all those great shows in sweatbox venues above pubs – metal was built for stages big enough to hold its bombast, audacity, and sheer hedonistic glee: attributes that BLS have by the bucket-load. 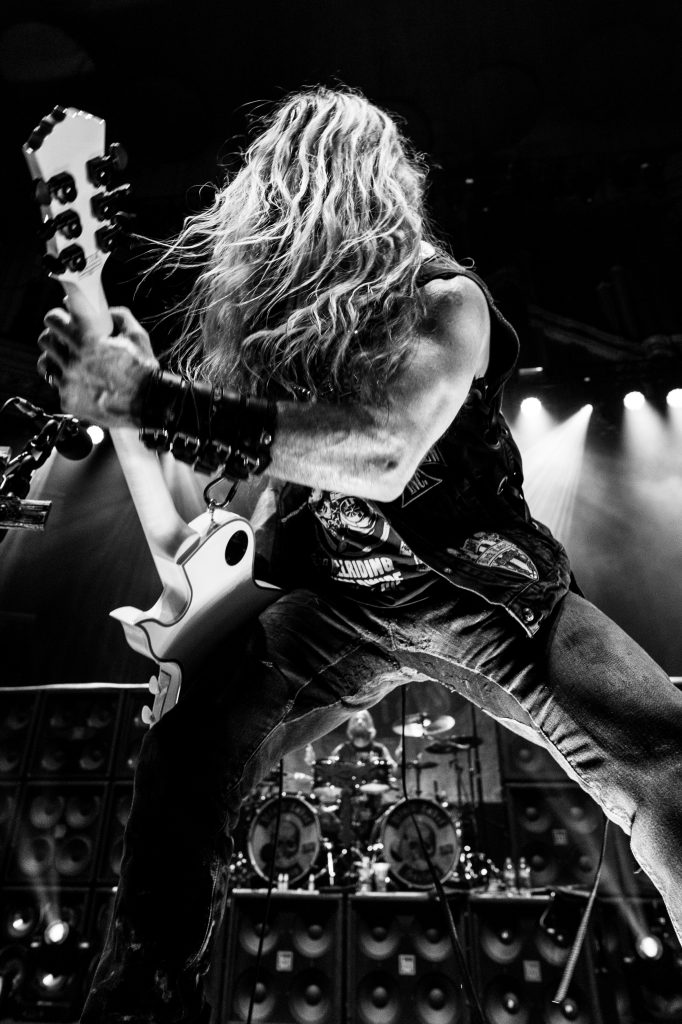 Tracks like ‘Suicide Messiah’ are perfectly crafted arena-rock anthems, with mammoth no-brainer riffs that could hook Moby Dick, predictably timed build-ups, and shout-along choruses designed for maximum crowd interaction. If in truth they’re the kinds of tracks I’m least keen on when listening to the albums, they’re the lifeblood of live shows, best enjoyed through a haze of beer, sweat and badly yet lovingly stitched battle-jackets. A trucker-capped fellow with a megaphone, whom I’m probably meant to recognize, comes on to gee up the crowd for the very peak of the chorus, which continues acapella even after the track ends. 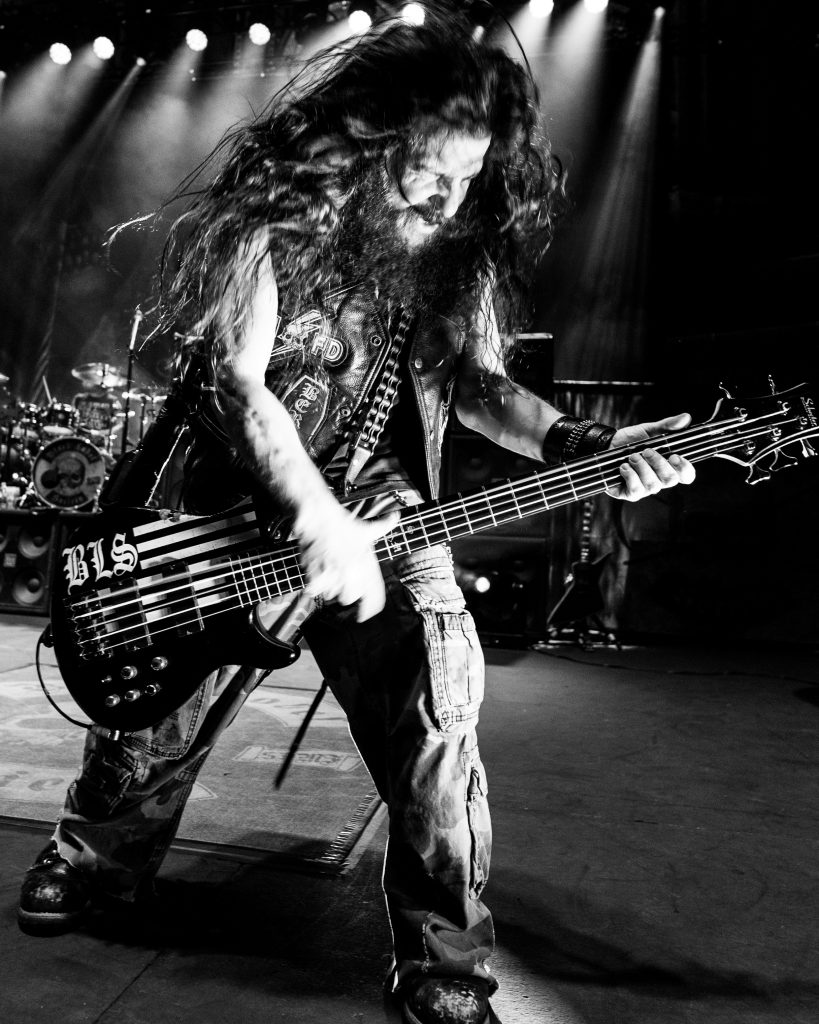 You can’t be average to play in Wylde’s band, so it’s apt that the hirsute frontman introduces his band members in the manner of an overly dramatic boxing announcer: “With the bass guitar, from the New Jersey chapter of Black Label Society, weighing in 180 pounds – John DeServio!” DeServio, who amply filled the already-very-large-and-intimidating boots left by the departure of James Lamenzo in 2005, dishes out mean low-end, adding colour and panache to ‘Suicide Messiah’ with tastefully slapped fills and bold, one-handed neck slides. “On the drums, from the Long Island chapter of Black Label Society…” the aptly-named drummer Jeff Fabb – largely invisible to me – is as solid and reliable as an especially solid and reliable oak tree. “Also on the rhythm guitar, from the Las Vegas chapter of Black Label Society, Dario Lorina…” who, as well as apparently being good at making fish and chips (or something like that), is made the butt of this whole heavyweight boxing gag by the fact he’s a skinny waif of a chap, especially compared with Wylde, whose guitar strap alone is probably three times the width of Lorina’s arm. Yet the great thing about metal is that, of course, none of this macho stuff really matters (right? Right? Wanna make something of it?) if you can shred – and Mr Lorina can certainly do that, polishing off fine solos, when the big man is occupied elsewhere. 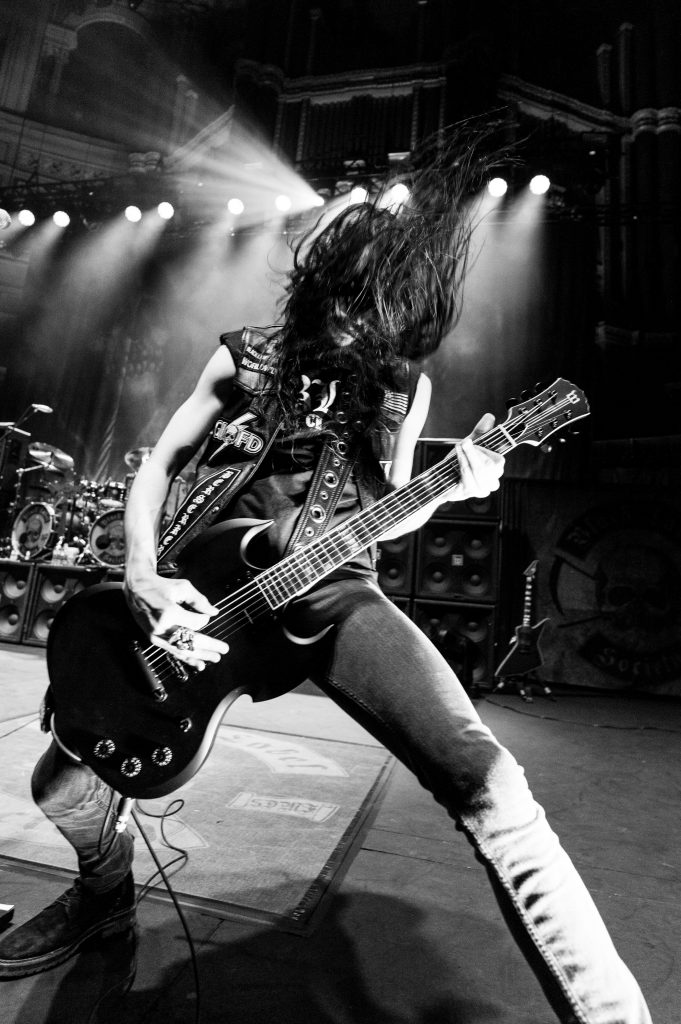 And what is there left to be said about Zakk Wylde? Phrases like guitar hero were coined for people like him but they still don’t do him justice. This is a man who has played alongside virtually all the major world-renowned rock and metal bands of his generation, as well as plenty before and after; a man who toured as part of the Experience Hendrix tour in 2014; a man who replaced the short-lived guitar legend Randy Rhodes in Ozzy’s band; and a man deemed one of the few who could fill in for Dimebag Darrell – to whom Zakk pays tribute at one point tonight – should a Pantera reunion ever occur. Zakk Wylde is the Chuck Norris of metal, around whom rumour, and awe accrete like groupies at the backstage door. Does Zakk beat his chest in time to the music or do primal rhythms follow Zakk’s pulse? Is Zakk an untamed beast on stage or does he set the bestial standard to which other wild creatures aspire? But the bottom line is that while Zakk Wylde is, like his drummer, a man who lives up to his name, he’s a superb all-round musician and songwriter, and with a great voice, too, like a grizzlier version of the much-missed Layne Staley. 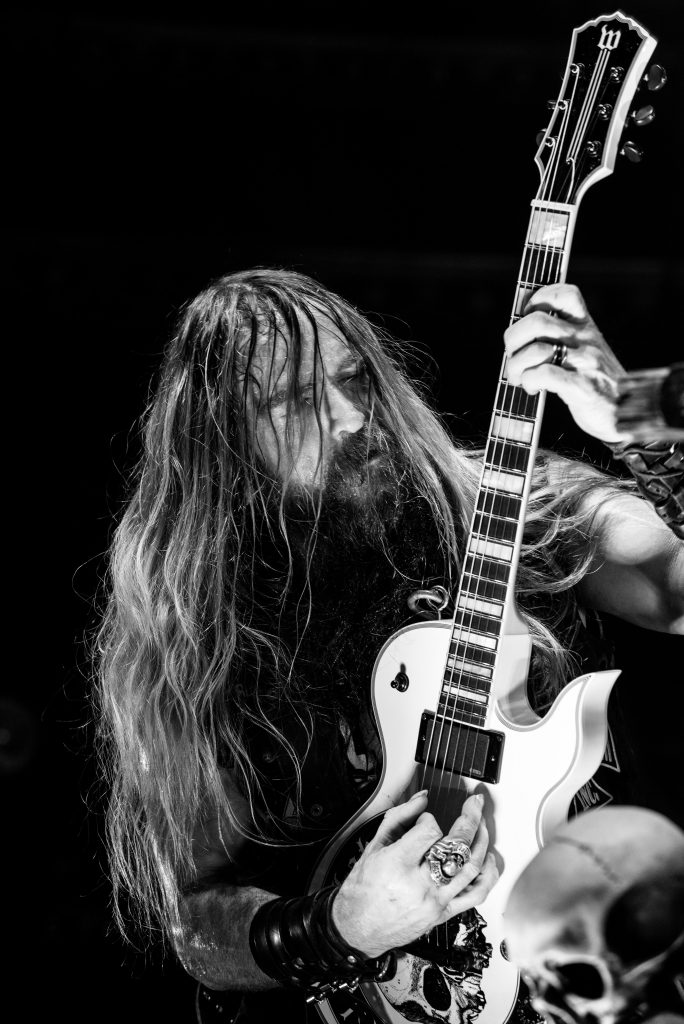 That said, watching Wylde play a guitar solo is like watching a starving person eat a steak or a perennially under-sexed person achieve orgasm (perhaps both at the same time), which is, by and large, a good thing. He doesn’t so much play the guitar as do guitar to you. Like all musicians – but especially guitarists and especially virtuoso guitarists – Zakk’s playing is at its best when given structure within the context of solid songwriting. Having seen BLS at Bloodstock a couple of years ago, I know how self-indulgent Zakk’s solo spots can be: endless note-explosions which quickly turn the warm glow of confetti falling upon your shoulders in celebration of your own recent nuptial union into a cold stream of machine-gun bullets into your face (you can swap the order of these metaphors according to taste). Well tonight, my ability to critique the musical quality of Zakk’s solo spot is largely swamped by the fact that he performs the majority of it whilst casually sauntering through the crowd, interacting with his fans – just one of the many ways that BLS make such an oppressively huge hall feel intimate. It’s a hilarious and powerful moment that is sure to remain a highlight of the show for all concerned, especially those who happened to find themselves face-to-face with the guitar-wielding bezerker – or metal’s very own Sabretooth. 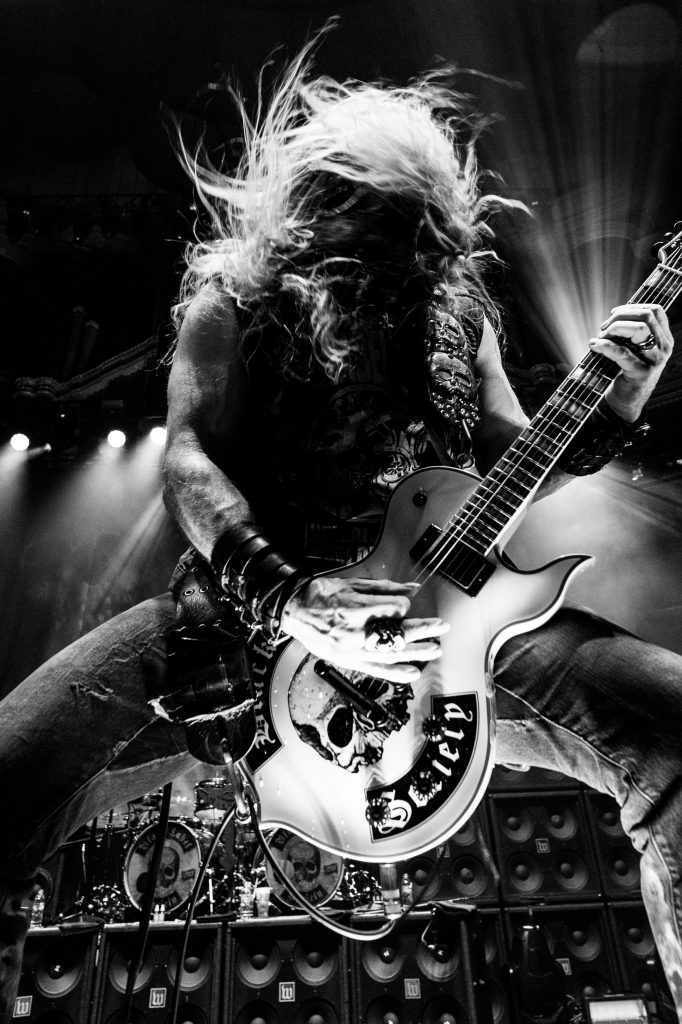 Zakk is, however, like his trademark bull’s eye guitar design, a man of light and shade. I’ll admit that, when Zakk sits at the piano, I’m hoping against hope that he’ll launch into ‘Old LA Tonight’, the magnificently cheesy torch-song he wrote with Ozzy (and Rick Wakeman, no less) for Ozzmosis. Instead, we’re treated to a string of BLS ballads (you know, the ones that normal fans actually want to hear), including tough-guy brooder ‘Bridge to Cross’ and the Skynard-esque ‘Spoke in the Wheel’. While he can’t stop himself from mucking around quite a bit – playfully toying with the crowd on the front row for a bit – Mr Wylde is far from a one-trick pony: he can sure tinkle away on the ivories, as well as shred the wood. Even rock stars have feelings too. 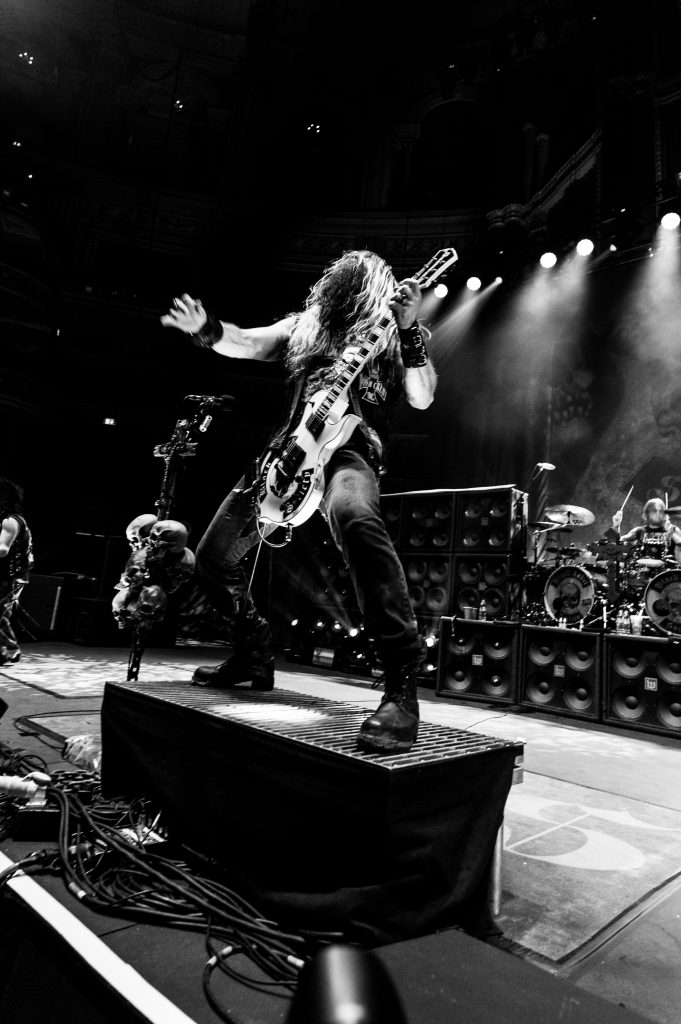 Indeed, as the moniker suggests, Black Label Society is a band born in vats of illegal-strength bourbon and rock star indulgence. But we must respect Zakk’s now long-term sobriety, and his abundant health and energy tonight is very clear – he clearly loves his weights almost as much as his axe. Falling somewhere in this list of Things Zakk Likes must surely also come his fans: not just because we have kept him in Levi’s and studded belts all these years, but for the simple joy he clearly gets from watching us respond to his music and his tomfoolery. An endlessly charismatic frontman, Zakk adopts his best Jesus Christ pose during the atmospheric bass intro of ‘Trampled Down Below’, bathed in green light, looking radiantly happy, rather than down-trodden or crucified, and playfully conducts the crowd’s cheers with the Chuck Berry “I can’t hear you” stance. 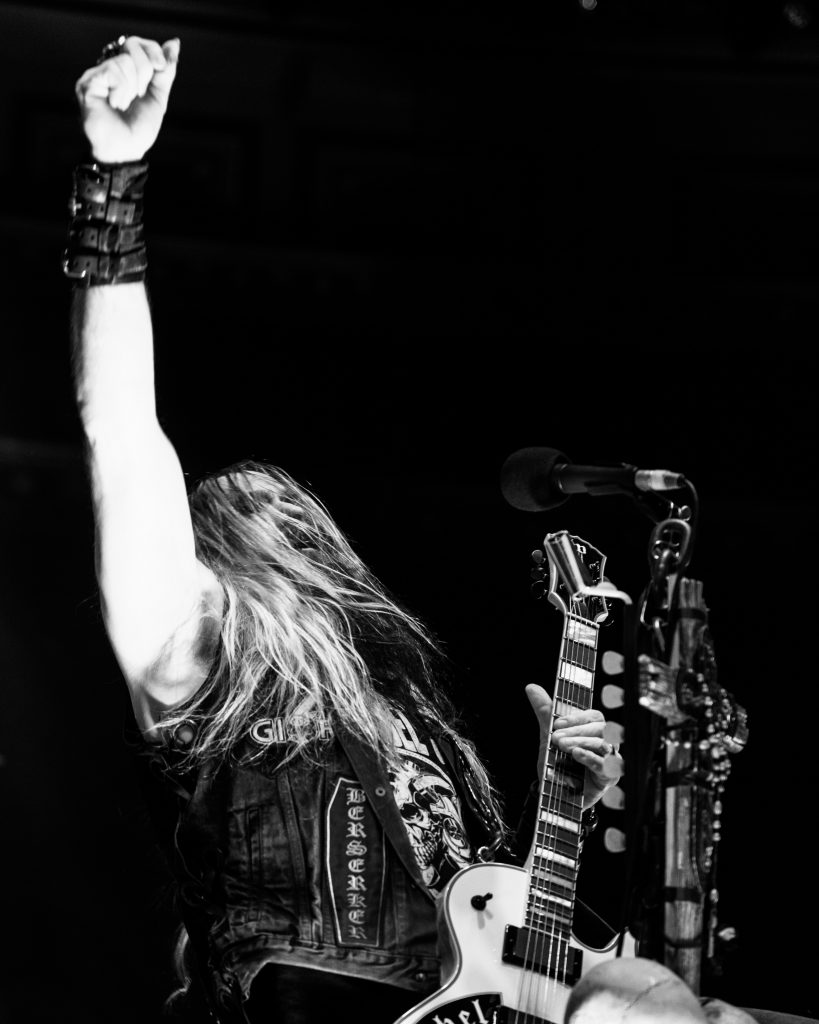 At the end of a long and energetic evening – I think Zakk could go on all night – I’m left craving more big, ballsy bands in grand venues, and I also now know why Zakk can give shout-outs to BLS fan chapters from cities all around the globe. These guys are not just going through the motions: Zakk will not rest until he has done Black Label Society to you. And we will consent to it again and again.