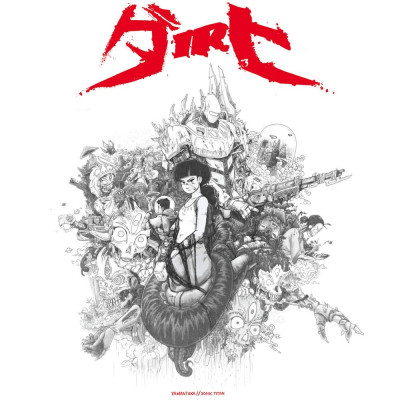 Yamantaka // Sonic Titan is a band that can only be described through the most outlandish and improbable matching of sounds, genres and concepts you can think of. Name drop just about every music genre from Prog Rock to J-Pop, throw in some influences from Japanese Theatre, anime and Native American culture, tie everything up with an overarching narrative and you’ll end up with a rough blueprint of what you can expect from the Toronto-based group : one hell of a sound to wrap your head around. To make sense of it would seem utterly crazy, were it not for the fact that it somehow does make perfect sense, as demonstrated with the release of Dirt, the third in a series of critically acclaimed full-length records.

As a group built around a core rock formation, Yamantaka // Sonic Titan oozes with ambition through every aspect of their work, leading some critics to label the group in the ‘progressive rock’ category. Unlike most groups with a similar line-up of instruments on display, the most prominent musician sitting in the spotlight alongside the lead vocals is the bands’ leader on drums, Alaska B., whose dynamic performance steals the show time and time again throughout the record. Rhythm and cadence shifts are key to the music on Dirt, and they are executed impeccably to serve the albums’ shifting moods and smooth flow.

Those in tune with the bands’ oriental sounds will hear some influences coming from classic anime and game soundtracks, especially with Brendan Swanson’s performance on keyboards. A fair number of tracks, namely ‘Dark Waters’ and ‘Beast’, sound like the score to a boss battle in a Final Fantasy video game. Though some rock bands have tried experimenting with similar Japanese influences, it takes a band with Yamantaka’s playing and songwriting skillset to deliver truly convincing results.

The record blooms with newfound colours with the help of new band members on guitar, bass and lead vocals, adding a tinge of new flavour to the sound established on the two previous records. Guitarist Hiroki Tanaka’s playing shines through with some beautiful lead guitar flourishes and solos, namely on ‘Beast’ and the album’s closing track, though he mainly serves as a rhythm player. Singer Joanna Delos Reyes proves to be the most notable change in the band’s lineup, standing out with her saccharine voice timbre and poppy vocal melodies on ‘Yandare’ and ‘Out of Time’, a nice addition to the bands’ vocal range.

The record takes its time to ease itself into the action. Dirt clearly aims for epic grandeur and makes sure the audience is fully immersed in the albums’ decorum before moving on to the main courses. Kicking off in full gear two-and-a-half songs into the album, the record does open up a tad bit too slowly and could’ve probably done without the intro track. With that being said, Dirt is a nonetheless well paced record.

One of the records’ main weak-points, however, lies with the records production, which struggles to maintain clarity on some of the louder, more densely arranged cuts, namely because of the rhythm guitar’s frail tone and messy mix. A cleaner production would definitely have been preferable to heighten the records’ cinematic feel.

Yamantaka // Sonic Titan’s theatrical nature is seen, heard and felt with every aspect of their work, right down to the records’ structure. Every track on Dirt reads less like a song than as a scene in a tightly edited feature film. The group leaves no room for filler, as every track unfolds and leads into the next. With that being said, the records’ pacing does overstep on the tracks’ playability as standalone songs, who feel incomplete when taken out of the context of the album.

Dirt is best regarded as one coherent whole, sectioned into scenes for our convenience but meant to be heard as one big composition. Despite a few quirks in the production department, this third full-length album holds up as a very solid release for the group. As eccentric as their work may read on paper, Yamantaka // Sonic Titan measure up to their claims and have proven themselves once more with another splendid piece of work that transcends genres. Dirt is a sonic spectacle unlike anything you’ve heard before, and that alone makes it worth a listen.