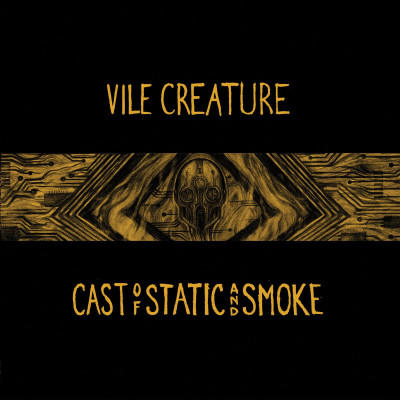 Cast of Static and Smoke by Vile Creature

Ontario doom/sludge duo Vile Creature have described themselves as an, “angry queer gloom cult,” a tag that sounds like it was focus grouped with the intention of mobalising the hordes of comments section mouth-breathers to reach for their torches and pitchforks and spit their well-rehearsed dunderheaded bollocks in the band’s general direction. If you’ve caught any of their news articles on certain metal sites or seen any of label Dry Cough Records’ Facebook posts about the band you’ll have witnessed exactly that reaction. Such is the sorry state of discourse in the foul year of 2018. But while irritating the intolerant is a worthy goal in itself they’ve been making a lot of more positive noise amongst fans of hideous, sluggard heaviness who aren’t afraid of the Q word. This, their second full length outing, ought to win them at least as many new friends as enemies.

Whilst their debut, A Steady Descent into the Soil, was a raw and heartfelt effort that dealt explicitly with the two-pieces experiences growing up queer, Cast of Static and Smoke moves into less overtly personal territory. A concept record centred around a post-apocalyptic sci-fi short story penned by guitarist/vocalist KW concerning a group of service robots accidentally granted sentience searching for their place in a world slowly being reclaimed by nature. Fragments of this far future fable (read by Erin Severson) punctuate the otherworldly sludge throughout the album. The whole thing is packaged along with the record and works to contextualise it’s crunching din, but would mean little if the main event wasn’t up to snuff. Thankfully the twosome know what they’re doing on that count.

The key element to success when trying to make music crushing enough to soundtrack an ecological Armageddon with only two instruments lies in the guitar tone, and KW has one perfect for the job. It’s so delightfully dense you could almost sink into the first distorted chords and get a decent night’s sleep. But it’d be a sleep soon plagued by night terrors – vocal duties are split between KW and drummer Vic, both of whom have the kinds of screams that would make harpies recoil and roars that would make grizzly bears cower. On opener ‘Water Tinted Gold and Painted Copper’ they’re joined by Cursed’s Chris Colohan to add some more hardcore vocal spice to the telling of the tale, a certain ragged desperation that fits neatly between the pairs more typically metal styles. Apart from Colohan’s cameo and some extra guitar from Jimmy Claypool of False on the rapturously bleak ‘Forest, Subsists as Tomb’ it’s just the pair of them recorded live, somehow making enough racket to convince you there’s a marching army on the horizon.

At their slowest they bring to mind Fórn without the melancholic second guitar flourishes or France’s Monarch! at their most grotesquely languid. They do pick up pace a little in place, like the second cascading fuzz and squealing feedback apocalypse that makes up the second half of ‘Circuits Bending and Breaking’, where they edge closer to the post-metal of Amenra, but mostly they operate within a narrow band of pace which can get a little over familiar over the course of the lengthy track running times. They’re a band who still feel a little rough around the edges, when they’re on point KW’s purposely frayed yet oddly melodic playing and Vic’s quietly propulsive drumming is an intimidatingly hulking proposition. And while the story somewhat inevitably gets lots amidst the agonised screams it’s good to see a doom/sludge reaching beyond the usual aspirations of many of the genres proponents – i.e. to fuel the vinyl revival with more wax slabs of identikit riffwork and same handful of themes. What we have here is a duo determined to look beyond doom/sludge’s sonic cul-de-sac: if you believe a band’s reach should exceed its grasp then you’ll want tune in to what Vile Creature are doing.