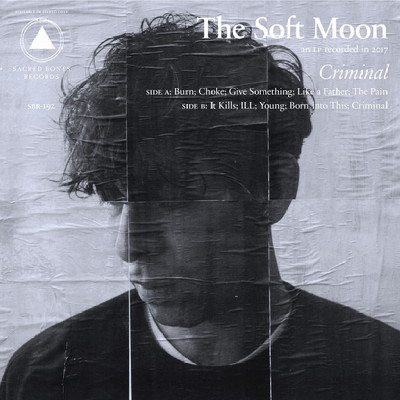 Criminal by The Soft Moon

Terminal is the fourth studio album by Berlin-based artist Luis Vasquez, aka The Soft Moon. He’s gone from a whisper on earlier releases to a roar on this new record. I won’t kid you, it’s a challenging record, wrenched with emotion and self-loathing. It’s post punk that pummels you with anger and confessional lyric shards, stabbing as it goes.

Opening track ‘Burn’ will smite you with its gothic force, laying waste to any preconceived notions you might have about what this record is about or how it sounds. “I can’t control myself” is a self-defeating mantra that ricochets through your head as the music punches along. ‘Choke’ is even darker, tearing open an emotional abyss and jumping in feet first. Intense and rather scary! ‘Give Something’ is equally creepy, with high pitched vocals and nerve-wracking electronic effects.

‘Like a Father’ keeps it subterranean, while ‘The Pain’ is heartbreaking as Vasquez intones, “How can you love someone like me?” Despite its title, ‘It Kills’ is surprisingly catchy in a downcast sort of way, showing Vasquez’s penchant for strong melodies (when it serves him).

‘Young’ lets in a tiny bit of light, with vocals and melodies blurred around the edges. Just in case you were caught nodding off to a dark blissful dream, ‘Born Into This’ will tear you a new one, jabbing repeatedly at your nerve endings as it unfolds, bass and drums pounding you into submission.

The final, title track is dark and grungy, the perfect soundtrack to your haunted headspace. To summarize, this is a cool but unsettling album that will keep you at a distance, even as it simultaneously invites you into its dark embrace.