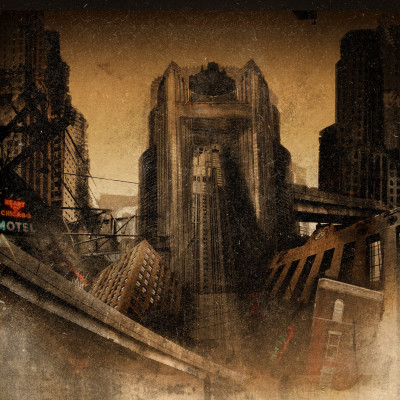 Split by Starkweather and Concealment

Whenever I hear of a split release, my mind still always takes me to that classic medium; the 7”. So, five or six minutes of music each. Cool! More and more often in extreme metal, when it comes to splits, you tend to get more wax than that through the mail. Now we can get two or even three times as much material from each band… Excellent! Starkweather, Concealment and the good folks at Translation Loss have decided to push that threshold a little more on this split release. Starkweather deliver a monstrous effort called ‘Divided by Zero’ clocking in at twenty-nine minutes, and Concealment offer ‘Liminality’, running at ‘just’ over twenty minutes.

Those two titles immediately seem important, when reflecting on the music. To divide by zero is technically moot. It quickly engenders philosophical thought. At first one can dismiss the idea as simply impossible, but the alternative leads to questions on the nature of infinity and the nuts and bolts of mathematics itself. ‘Liminality’, on the other hand, captures the essence of the very middle ground, the transient area, of this idea. To ‘stand on the threshold’ between one status or the other; to be in the midst of the thought between question and any potential answer. Both, in short can be summarised as being somehow all or nothing at the same time – a rather round-about way of coming to the confusing and irrational conclusion of the ‘Schrödinger’s Cat’ thought experiment: that the cat is both alive and dead. If there were ever a need for musical interpretations of that concept you would probably pick up the phone to Starkweather and Concealment pronto. I can only think of a few other bands exhibiting this wizardry for meaningful musical hallucinogenic illusion and escapology (Cleric, Secret Chiefs 3; maybe Gorguts and Krallice, as reference points, too). None have taken their concepts this far into Event Horizon territory yet, though.

It’s also worth noting that both bands have not had any previous material released for seven long years. I clearly need to get myself up to date with Concealment, but it’s been a long wait for new Starkweather offering, with this very track having been ‘sat on’ for a little while, waiting for it’s perfect vehicle for release. They definitely found it with this split. Side note – if you ever want to be far more up with what’s going on in the underground extreme metal scene follow Starkweather on Facebook, as at least one of the guys is a mix of oracle and encyclopaedia. Fans of one or both of these bands won’t be disappointed by their return and if it was just the one lusted after, will surely find a new band to follow after multiple listens of this glorious split. Let’s just hope that both of these brain-teasing behemoths have more in the pipeline.

Both tracks are labyrinthine in nature and to describe them in detail would be to do them a disservice and also somewhat spoil the surprise of how technically proficient they are, but also quite how surprisingly moving and involving they both become as one’s ears attune, and repeated listens allow for greater depth to be mined. Starkweather’s track is the heavier of the two in terms of tone and concept, being consistently jarring and brutish on the listener, whereas Concealment offer a track, that feels devilishly precise and cutting, but also hypnotic, filled though it is with atonal experimentation.

Metal often gets a bad rep for being simple and just about heaviness, and I just wish that more people in the metal community, and even a wider public, could sometimes be exposed to this spirit of adventure sometimes. They would, of course, hate it, one assumes, but it clearly shows that there is a dizzying level of creativity going on in our genre, too. But, to be honest, who cares? At least we get to keep one hell of a great secret. Starkweather and Concealment’s split won’t be for everyone, not even those who do operate in similar circles to them, but for those who like their heavy genre-blind and forward thinking this one’s for you.