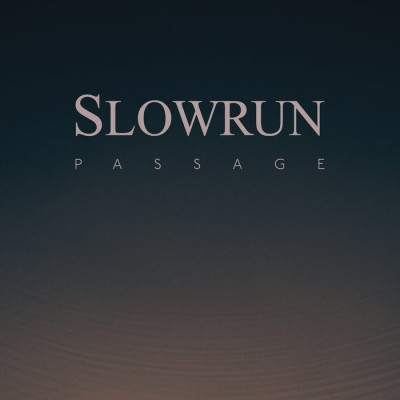 Slowrun has consistently put out great music and their last release is no exception. Late last year, this Finnish instrumental post-rock/ambient trio, released a two track EP entitled Passage. At just under fourteen minutes in length, it left me amazed and only wanting more. Could that have been their plan all along?

‘Adrift’ starts out with that shimmering guitar effected sound and a cool bass riff playing in behind. Reminded me a lot of the music style of Appleton, Wisconsin’s post-rock band, Searchlights. The track starts nice and slow and edges its way to a rhythmic beat. Then at almost the three-minute mark, comes in a little heavier, epic even. Pulling at the heart strings and sending it wistfully adrift. Then at the 5:43, it jolts you out of the wistfulness with its heaviness.

‘Wake’ starts off the same way as ‘Adrift’ with its slow and quiet start but has a completely different tone and setting to it. The bass line in this track shines, especially just after the halfway mark where it growls in its intensity. The guitar work offers splashes of sonic color and is the crank that helps lift the wall of sound the band creates with this track.

The only fault I could find with this release is that it was too short. Teasing fans with only a two track EP was down right criminal. Hopefully the band will release more music soon and inevitably, all will be forgiven.