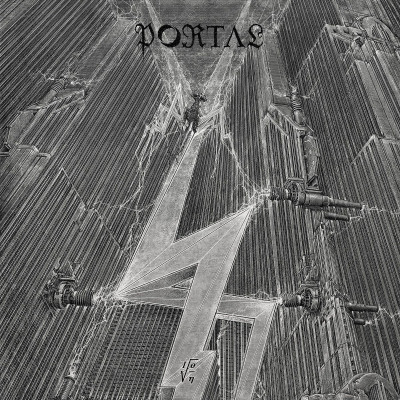 If Portal are incomprehensible extraterrestrial or extradimensional entities, as they have presented themselves since their inception in 1994, then their music is created by instruments plugged directly into the skein of a hole that leaks strange sonics into the mundane world. A sensation of ‘abstract horror’ is key to this sound, conveyed most distinctively by the idiosyncratically muffled, claustrophobic production values, which Portal have maintained strict personal control over during the course of their five-album-in-twenty-four-year career. They are known as one of the most strange and singular bands around – a reputation that ION will no doubt support.

Portal’s strategy is a little different this time around, however, combining their cleanest production yet with song structures that are even more unpredictable and unhinged. Previous compositional arrangements were only discernable as intense clusters of riffs like massed tentacles, constantly evolving and mutating with bewildering speed. On ION the riffs instead coalesce into electrons, forming stabbing shards of chromatic powerchord as jagged as the lightning bolt that strikes the album’s tightly-lined, monochrome cover. So ION moves away from Portal’s trademark muffled soundworld, with this cleaner production serving two main functions. Firstly, it showcases the band’s virtuosity, which was often lost in all the gloom. Like recent albums by Akercocke and Nile, or the Emperor live albums, a cleaner production means you can hear all the technical skill and songwriting work that’s gone into this condensed, hyperactive recording. Secondly, it helps articulate a rather different sonic world for Portal and produces different sonic effects. The world of ION may be cleaner, but not too clean; we’re not talking Mark Ronson here. Instead ION sounds just as extreme as Portal of old but in a different way: like an industrial sanding machine, sparks flaying flesh in an abstract electrosonic charge – and there is barely a chord of ION that is not as dissonant and atonal as it can possibly be. Revealed here, shorn of all the gloom, are an array of metal styles and subgenres through which Portal fluidly pass without fully committing to any of them. There’s black, death, doom, grind and a suggestion of The Locust at their most powerviolent. Yet somehow Portal’s songs still manage to retain a sense of actual development and logical, if not entirely rational, composition.

Portal may be from the future. And ION, in other words, feels like a work of science fiction in both sonic and visual aesthetics. The bolt on ION‘s cover appears to be powered by futuristic, clamp-drones firing electricity into geometric patterns suggestive of the ancient cyclopean cities described in the fiction of H.P. Lovecraft. The album seems to push further forward into the band’s fictional chronology than the cosmic, plasmic, tentacled-terror of Vexovoid (2013), as that album did in relation to the apocalyptic sacred geometry of Swarth (2009), as with the Seventeenth Century horror-horology of Outré (2007), on and on ad infinitum reverse spiraling into some kind of ancestral deep time of Portal-lore.

Opener ‘Nth’ fades in with industrial-tinged ambience, the emergence into an inhospitable, dystopian realm – a calm if brooding introduction that is quickly cut apart by ‘ESP ION AGE’, demonstrating the full violence of Portal’s frantic razorwire bundles of sharply-angular guitar. ‘Husk’ mirrors this sharpness through the vocals, featuring an exaggerated sibilance to the titular word, which is uncharacteristic discernable; it’s a punchy track that would go down well live, with memorable chromatically-descending death metal riffs feeling a little less technical than many others, leaving enough breathing space to be memorable if not exactly catchy. ‘Phreqs’, too, is something of a head-turner, the first two minutes the closest Portal get to epic grandeur, vaguely reminiscent of latter day Behemoth, which then unwraps into a powerful buildup, gradually developing an intricately interlocking mesh of lick-splinters laid over gnarled dischords, increasing in intensity before decreasing in speed, finally trailing off down a gurgling metallic tunnel into nothingness.

‘Spores’ is one of the most corrosive tracks Portal have released to date. With guitar-work indistinguishable as riffs or chords and heard more like abstract sound textures, it’s essentially a short (2:27) piece of harsh noise: the scraping of rough sheets of metal on metal extremely quickly or the firing of some kind of plasma cannon. With no obvious vocals throughout, the raw momentum of ‘Spores’ briefly merges into what sounds like a giant maw opening at the climax, before launching unceremoniously into ‘Phanthom’ with scrabbly guitar dissonance that is much more quintessential to Portal.

ION concludes with ‘Olde Garde’, which, clocking in at almost ten-minutes, is the longest on the album – itself only lasting approximately thirty-six minutes in total. The first five minutes of ‘Olde Garde’ provide especially frantic and hyperactive chords, punctuated by sparse, dramatic drums, before trailing off into an anti-climactic section of echoing ambience, warped-sounding eerie moans and wails low in the mix, and the old-fashioned vinyl crackle of needle in groove, and possibly the swelling strings of an orchestra fading to close. This crackling – not dissimilar to some of the underlying ambient sounds on ‘Nth’ – almost leads the album back to its start, forming a closed loop. As its title suggests, ‘Olde Garde’ works as a kind of nod to their earlier material, the brief interweaving of the gramophone era into this Portal time continuum, before returning to the future/present at the album’s beginning.

While Portal’s soundworld on ION draws heavily from science fiction, its literary parallels are ultimately more complex to outline. ION is not a future that is strange to comprehend but ultimately cognitively able to grasp, as is at the heart of much science fiction. If you know Portal, you’ll know you can’t talk about the band for very long without using adjectives like weird, strange, bizarre, outré, eldritch, esoteric… and these signs help us to locate Portal in literary terms. Rather obviously, it seems to me, the aesthetics of Portal are closer to that of weird fiction like Clarke Ashton Smith, Jeff Vandermeer and Steph Swainston, which weaves together literary (sub)genres, such as horror, science fiction and fantasy, just as bands like Portal, Howls of Ebb, Impetuous Ritual, and Rites of Thy Deringolade do black, death, doom, grind, epic, core, etc. Weird fiction often describes occurrences that threaten to overwhelm human understanding altogether – cults dedicated to maddeningly-bizarre alien gods, for example, and their egress into our familiar dimension, or inhospitable zones infiltrated by sentient alien fungi. Portal’s early material, such as ‘The Crawling Chaos’, references the work of cosmic horror maestro H.P, Lovecraft, and their name itself is a quintessentially weird device. Is there, in fact, anything about Portal that is not weird?

I could go on at length, but I’ll keep brief – like Portal’s bewildering and dazzlingly-odd fifth album. Rather than marking a trend towards accessibility or conformity, ION is Portal at their weirdest, their most excoriating and their most essential.