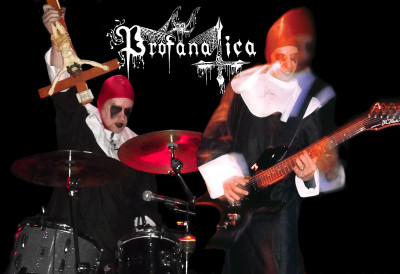 "This profanity and blasphemy is very real. If someone tells me that they love religion, I can say fuck you, its fake, and I happen to know the true meaning behind it, and its purpose. Rather than someone saying 'Ill show you real dark power', but we have to light a torch in the dead of winter then go into the woods and stare at the moon. Fuck the moon!"

While innovators of the Second Wave of Black Metal were sending out fetid musical shockwaves from their Scandinavian epicentre, something equally foul and sacrilegious was brewing across the pond. If the Norwegians turned metal into a movement of Satanic extremity, characterised by scathingly frostbitten production, then Profanatica, formed in New York, 1990, were similarly extreme but something different. Built on bass-heavy battery and brutal blastbeats, Profanatica quickly distanced themselves from the Norweigan scene musically and thematically, focussing on the utter degradation of Christian iconography and a wild, unrestrained musical ferocity.

After countless split-releases and EPs, four studio albums and regular tours around the US, Profanatica finally defiled European shores for a few shows and festivals in 2017. Ahead of their first EU headlining tour, Echoes & Dust spoke with Profanatica’s drum-marauder and filth-spreader Paul Ledney about video taping, the supernatural and maniac festival fans.

E&D: Profanatica played a couple of dates in Europe last year, in Germany and Czech Republic. Was that the first time you’d played outside of American and Canada?

Paul: Finland was the first time. Then Germany and Prague.

E&D: Was it a noticeably different experience playing in Europe?

Paul: All of the shows were great during this period. The very first show was in Finland with Horna, Witchcraft and Morigan. The crowd came for all the bands, and to see if we could actually “pull it off” live, which we did.  It was a great show in Tampere and the crowd was crazy, and great.

The next time we played there was in Turku at a fest, and the crowd wasn’t so great; although the house was packed it was a fest situation with lots of different-style bands. We replaced a band who had to drop out due to illness, so we came in at the last minute. The people liked it but did not know our material and they were very tame. Lots of younger people there to see “post black metal” bands from other countries that were doing well at the time.  On a fest setting you’re going to get a mix of people who like different things. I would much rather have a crowd where they know our material and that’s why they are there. Rather than to just go out to drink or they think its cool to be there. I’m not judging at all here.  Many times people will ask me to go to a show, and I pass on it if I’m not that into the bands. Think about it, they don’t really need me there standing with my arms folded with a drink. So far our best shows were Chile and fucking Toronto maniacs

E&D: You’re on tour with Rites of Thy Deringolade and Auroch – a perfect and sickly package indeed. Have you known those bands for a while or toured with them before?

Paul: Yes we have known about these bands for a while, and it is a good fit.

E&D: How did you get hooked up with those guys?

Paul: That’s thanks to Daniel from Killtown Bookings who put this together. He has worked overtime to plan this whole thing, as it is a lot of dates.

E&D: The upcoming tour is clearly supporting your last album, the superb Curling Flames of Blasphemy from 2016. Have you had the chance to work on any new material recently?

Paul: Thanks. We are in the studio as we speak recording a split with Demoncy. The material is a perfect mix of new and old style.  We like to reuse parts from older songs and just modify them. Since it is our band we can do whatever the fuck we want. And titles as well. Many bands are scared of this approach. At one point we had three songs named ‘God Blessed Them’. Now there’s two, ha!

E&D: Can we expect to hear any new material on the upcoming tour? What about any old favourites?

Paul: That is a secret.

E&D: Profanatica have been around for over thirty years. Is it ever difficult to achieve greater levels of profanity, blasphemy and shock through your music and stage show?

Paul: So what we do is go hard on our own songs, meaning that we get into a zone and believe in our material 100%. All of our parts are bold final decisions, and we have no elusive parts. This is what separates old school from new school. New school is the same but without emotion.

E&D: You’ve spoken before about wanting to simplify and refine your sound over the years. Where do you see Profanatica currently in that process? How do you hope to further develop the band’s sound in the future?

Paul: I don’t want to develop the sound at all. There are some new spices we like to add in here and there but it’s that “Sameness” that we are after.

E&D: It seems clear that the Profanatica we see onstage and represented in your music is different in some respects to the articulate, intelligent responses you’ve provided to other interviewers. In what ways does Profanatica connect with your lives outside music?

Paul: It’s an extension of ourselves. I’m the same on and off[stage] but onstage it’s just more of it. Blasphemy is a real thing, and is done in one form or another daily with us.

E&D: How do you see your Satanic philosophy affecting your lifestyle?

Paul: We are not Satanic.

E&D: In the past you have cited Aleister Crowley as one of the main sources for your beliefs. Is that still the case?

Paul: I admired his ability to elevate himself to the top of whatever program or group he was working with.

E&D: Have you ever been associated with any esoteric/occult orders? Or are there any existing orders that you respect?

Paul: This is where I took a lot of heat back in the day.  We don’t believe in anything supernatural on this planet.  Once you understand the pressures, gravity etc., one can see the rest of it is “play acting”.

Yes there are powers of the mind.

E&D: Are there any art or artists from outside of music that have influenced Profanitica in some way? Books, visual/performance art, films, etc. You mentioned being a big fan of H.P. Lovecraft before – has his writing or that of other Horror/Weird Fiction writers had a noticeable influence on your music and philosophy?

Paul: Yes of course. We pull from a variety of resources to get to where we are: Punk and hardcore, artwork, fabrics, kali/silat [a synthesis of Filippino and South East Asian martial arts], movies, NLP [Neuro Linguistic Programming], etc. I’m always keeping my eyes and ears open for influences.

E&D: What is the ultimate purpose and importance of your profanity and blasphemy?

Paul: I believe black metal should have a certain amount of this already in the music. Going against the norm it makes perfect sense to us.

This profanity and blasphemy is very real. If someone tells me that they love religion, I can say fuck you, its fake, and I happen to know the true meaning behind it, and its purpose. Rather than someone saying “I’ll show you real dark power”, but we have to light a torch in the dead of winter then go into the woods and stare at the moon. Fuck the moon!

I’m surprised that more bands haven’t adopted this into their own expression.

E&D: Have you ever intended to convey an explicitly political message through Profanatica?

E&D: For those who have not seen you perform live before, what can your audience expect when you play Europe in March? Is it wise to stand in the front row?

Paul: Yes. Hopefully it will be same thing as usual. We go hard and you should be able to feel it, which is why I’m against videotaping. It has nothing to do with us “protecting” our music. It has to do with those live energies being GONE after we play. What you have left is a 2D video that you can’t feel and it’s very stale to me when I watch it online.

E&D: What effect do you intend for your music to have on your audience, and what would your ideal audience response be?

Paul: Ideal audience are made up of people that know our material, and want to be there. We don’t want anyone that thinks Profanatica is just OK or cool. The three shows that stand out are Toronto, Tampere, and Santiago.

When we played in the Pacific Northwest the crowd just stood there in shock in-between songs like they didn’t know where they were. It was fucking lame, and we talk about it all the time. So far we have not been back.

E&D: Your time is much appreciated, and I’ll look forward to your show at the Boston Music Room in London later in March!