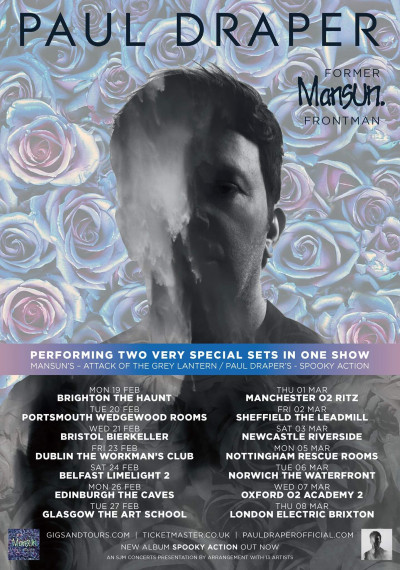 This was certainly a topsy-turvy tour for Paul Draper. He performed Mansun’s Attack Of The Grey Lantern in its entirety to sold out venues, and largely positive reviews. Yet his arrival in Brixton on Thursday for the tour finale followed quite the tumultuous previous few days. In what could most charitably be described as an “off night”, Draper suffered a catastrophic meltdown on the Monday, both on stage and social media. Apparently upset by a journalist immediately prior to the performance, Draper turned in a lacklustre set in Nottingham, whilst elements of the crowd seemed happy to egg him on in his worst tendencies. Draper has since apologised for his behaviour.

The Electric is buzzing during the warm up act, as old friends are reacquainted prior to Draper’s arrival. Mansun attracted a hard core following, and tonight fans old and young are keen to catch their desperate icon in action. Before the reminiscing begins, there’s the smaller matter of Draper’s Spooky Action solo material, the delivery of which will surely set the tone for the rest of the evening. There’s a real sense of anticipation in the venue, perhaps given an edge by the decent percentage of the crowd who are aware of Draper’s incoherent utterances earlier in the week. Thankfully the fans seem equally au fait with his solo work, and seem determined to encourage their hero from the off. It must be gratifying for the artist to see so many people signing along during a first-half of new material.

Presented as a gig of two halves, it’s hard not to compare and contrast the two sets of songs performed, and Draper’s solo material stands up well. Whilst undoubtedly more spiteful and less surreal than his 90s’ purple patch, the first half’s melodic content ensures its success both on record and on stage. The set opens with ‘Don’t Poke The Bear’, the first track on Spooky Action, Beau Bernard’s rolling-bass grooves underpinning Draper and keyboardist Christina Hizon’s lead vocals in octaves. If there’s any concern that Draper’s not going to aim for the high notes this evening, this is dispelled early on in the spirited rendition of ‘Grey House’ that follows. Jon Barnett (drums) and “stillest man in rock” Ben Sink (guitar) make up the lean and powerful ensemble.

Draper opts to showcase the first-half of his new LP, with EP track ‘The Silence Is Deafening’ substituted for the more delicate ‘Jealousy Is A Powerful Emotion’. Some obtrusive piano mars the beginning of ‘Things People Want’, before the first half culminates in a winning trio of songs. ‘Friends Make The Worst Enemies’ presents an example of Draper’s bitter new lyrical world view, and is sung with venom. ‘Feeling My Heart Run Slow’ is triumphant, marrying electronic and live instrumentation to perfection, before ‘Who’s Wearing The Trousers’ heavy riffs bring to mind Mansun EP track ‘What It’s Like To Be Hated’. The track also possesses a great vocal refrain in the verse, if one that this evening somewhat reduces the impact of the song’s own chorus.

After a longer-than-advertised interval, Draper and his young cohorts return to the stage to run through the album that shot him to fame back in 1997. Credit must be given to Hizon, who adds samples from her banks of keyboards, all well synced with Barnett’s live drums. Whilst the sound replicates the LP down to the grandiose orchestral sweeps, the appearance of Draper couldn’t be further than from 21 years ago. Tonight he is bearded, a peculiar mix of introversion and abandon in his stage persona. His voice, so impressive in the first half, is often drowned out during by the enthusiastic singing of the Brixton crowd during the first side of Attack Of The Grey Lantern, such is the celebratory atmosphere.

The singles ‘Taxloss’ and ‘Stripper Vicar’ (the latter described as “silly” by Draper) encourage the loudest singalongs, and are both expertly dispatched, the electronic end of ‘Taxloss’ sounding particularly impressive. Sink’s guitar work replicates Chad’s lines faithfully, adding to the authentic-album-reproduction feel, dancing over proceedings during ‘Mansun’s Only Love Song’. ‘You, Who Do You Hate?’ is a highlight, its loud quiet dynamic perfectly suited to live sets, in spite of it not having been a fixture for Mansun during tours. ‘Wide Open Space’, preceded by a clap-along, is predictably well received, a paranoid anthem delivered with an assured urgency by Draper and Sink, who handles the soaring leads ably.

Attack Of The Grey Lantern itself is an album of two halves, with repeating lyrical and musical motifs gluing it all together. The second side is a darker affair. ‘She Makes My Nose Bleed’ sounds sleazy, ‘Naked Twister’ epic and forlorn, whilst ‘Disgusting’‘s quietest moment, the whispered “you’re so full of venom that you spit into your own sweet face” is just one of the more creepy moments on a record oft renown for its more colourful character descriptions. Those characters, and, of course, a lot of na-na-nas, crop up all over the place but particularly at the album’s close. ‘Egg Shaped Fred’ might not be the match of the similar-sounding non-album track ‘Take It Easy Chicken’, but this, and ‘Dark Mavis’, provide the crowd with two last exhausting shout-along moments before the set concludes.

Although ‘Take It Easy Chicken’ would have been the encore choice that would have ensured the biggest cheer of the night, the band opt for the authentic album bonus track, the tongue in cheek ‘An Open Letter To The Lyrical Trainspotter’; an amusing end to an exhilarating evening of live music. There will be time for ‘Take It Easy Chicken’ on future tours. Instead the biggest cheer is reserved for Draper’s promise, made as he exits the stage, to return with a similar whole-album treatment for Six. With hopes of a second solo album in the pipeline, acoustic tour rumours stoked by Draper himself, forthcoming support shows for Steven Wilson, plus this tantalising announcement, Draper’s comeback looks to be complete. As great a gig as this was, if Six is to follow, this could just be the warm up. Regardless of what may be, let’s judge Draper on the here and now. That, of course, may result in a different rating depending on which date of the tour you saw. Based on this evening’s evidence, Draper is back and on cracking form.