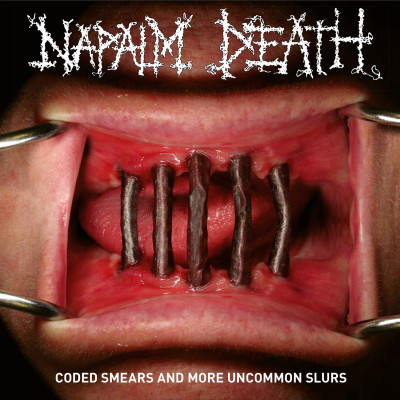 Napalm Death have spent the last couple of years appearing at some very non Napalm Death venues spreading their brand of noise to the previously unconverted (Glastonbury and a recent dance music festival in Southport where they shared the bill with 2 Unlimited for example), but away from scaring the “normals” they have been looking back at their most recent past and their Century Media era of albums, and raided the vaults to offer up 31 hard to find tracks spread over 2CDs or 2LPs.

The first disc mainly covers bonus tracks from the various versions of each of their albums from the past 14 years, opening up with the typically uncompromising ‘Standardization’, originally from the Utilitarian sessions, and this sets the pace for the first few tracks. The first sign of any give in this release is during ‘Oxygen Of Duplicity’, which is still massively heavy, but just slows the pace a little, but perfectly fits the release it came from (The Melvins split in 2013). It’s soon back up to full speed again with the Geopopel cover ‘Paracide’, a 90 second whirlwind of punk chaos, the first of two covers on this disc. The second cover on this side is their take on the Cardiacs’ ‘To Go Off And Things’ and like always whenever Cardiacs material appears, it’s a standout track. Chaotic and given the Napalm treatment.

The second disc opens with another cover, with G-ANX’s ‘Clouds Of Ignorance / Victims Of Ignorance’ soon clearing the way for 9 tracks that are all 1 or 2 minutes flashes of violence before the first of two longer tracks. The five minute ‘Omnipresent Knife In Your Back’ is a clear sign from the Time Waits For No Slave era of the band that looked to add more genial and slower components into their arsenal of noise. Similarly, the 6 minutes of ‘Atheist Runt’ (from the Smear Campaign sessions) adds a more epic and grandiose feel than their normal gimmick free offensive. By the time the instrumental closer of ‘Weitschmerz’ comes round, the fact that its so different to the rest of the album barely registers, its just a fitting end to a fine collection of songs.

Similarly, as with their choice of shows, the tracks that come from split releases really show the breadth of their reach and diversity in how they work. The ones featured here are with bands as diverse as Melvins, Converge, Heaven Shall Burn, Voivod and Melt Banana with most of those as important as Napalm Death in their respective scenes. Whereas some of these out takes releases can be lazy and a quick and easy cash in, this is a document of the last decade and a half of one of extreme metal (and music in general in my opinion) most important bands. It also shows how much they have changed from album to album with many different influences creeping in over the course of the 31 tracks. The 90 plus minutes are a perfect companion to each of the Century media era albums, and it just makes want the new album to come round even sooner, so I guess it’s done its job on both fronts. As with almost all napalm death releases, it’s an essential addition to any decent grind collection.