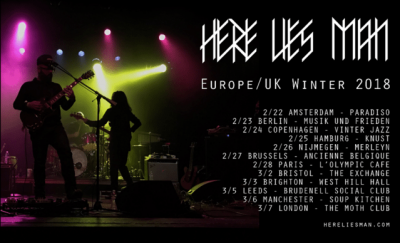 We approach writing and performing as though we’re scoring a movie. You only really understand the character motivation when you look at all the lyrics of all the songs combined.

Here Lies Man’s eponymous debut album was one of my favourite things to play during my few months working at Funky Junk; I’d sit in the demo room where people test speakers working and blast the album out on different sets each time, it always sounded fucking great. The sound of the collection felt like the missing link between so much of what I already enjoy; it was a record the appealed to the miserable mosher in me whilst also dragging me by the hand to a previously unfathomable dance-floor of groovy and funky sounds. I am not usually one for funky or groovy things but, I fucking love this band; I love the diversity of the music but, I also love the use of motifs and repetition and the production and I have so much I want to know because apart from them appearing on Echoes and Dust all that time ago, I don’t know a fucking thing about them. Fortunately, founder members Marcos Garcia and Geoff Mann agreed to enlighten me. . .

(((O))): To start off simple, who are Here Lies Man and what do you feel you represent or are trying to express with your music?

Marcos: It’s a concept driven band. We approach writing and performing as though we’re scoring a movie. You only really understand the character motivation when you look at all the lyrics of all the songs combined.

Geoff: It’s also the culmination of a lifetime of living inside a variety of music styles and finally bringing them together in a way that is less “mash-up” and more “family” as they all truly have their roots in the same place.

(((O))): I adore the unique aural presence of the band, what influences, manufacturers, effects and miscellaneous factors would you say were most integral to the overall sound of Here Lies Man?

Geoff: Our sonic influences START at Afrobeat and Classic Hard Rock, taking advantages of as many of the processes that were used to capture that music as we can: analog tape, abusing big and little tube amps, spring reverbs and analog delays, etc., and using and manipulating frequency acoustically and electrically in a way that sometimes highlights the imperfection of those processes. From there we expand however we see fit in order to continue telling the story that is Here Lies Man.

(((O))): I’d really like to buy a t-shirt and a vinyl copy of the release and for fans in the UK, it can be a fairly decent saving to not have to order this shit overseas. What sort of merch do you guys bring on tour?

Marcos: We’re having merch made in Europe and having vinyl shipped to us for the tour. We’ll be fully stocked with LP’s, t-shirts, and posters. UK fans will definitely save money buying from us directly.

(((O))): With it being almost a year since your first album came out, what do you feel the challenges and successes you’ve faced have been in the promotion of the release, and what I assume must now be a sense of pressure or excitement with regards to a sophomore effort?

Marcos: Definitely excitement. We’ve recorded two albums worth of material. The first of which is called, You Will Know Nothing We’ve already started writing the fourth album.

Geoff: Yes, excitement, absolutely. It’s exciting to have listeners on your side and the opportunity to bring them along on our creative journey and evolution.

(((O))): With the first record having such an idiosyncratic sound, do you have any ideas as to what sort of direction you’re interested in exploring next with regards to the character of the band?

Marcos: The first album is essentially a proof of concept. Everything going forward is elaborating the concept. Riff based, heavy music has been around for a long time now, but by applying the clave (an African rhythmic formula) you get something seeming new and definitely unique.

We spent more time on the second album which is slated to be released at the end of May. The idea was to expand the palette and develop the concepts presented on the first album. The result is a bigger sound.

Geoff: Moving forward, our goal is to take what we’re doing and go as far with the auditory storytelling as we can, expanding on the textures, without getting too polished or comfortable. Hopefully we’ll always be in a slightly risky place where we’re just balancing past the edge of our comfort zone. We have to always be willing to reach a little to get to new and special places.

(((O))): What would your message be to a prospective audience member toying with the fantasy of watching Here Lies Man?

Marcos: Bring earplugs and be ready for catharsis.

Geoff: Every moment in this universal existence is unique, whether it feels that way or not. Don’t pass up opportunities to be part of the story.

Be sure to catch Here Lies Man as they headline in Leeds (Brudenell, 5 March), Manchester (Eagle Inn, 6 March) and at another unmissable night from Bad Vibrations in London (MOTH Club, 7 March). There is no one else like them, and this is certainly a rare opportunity to catch them in the UK.