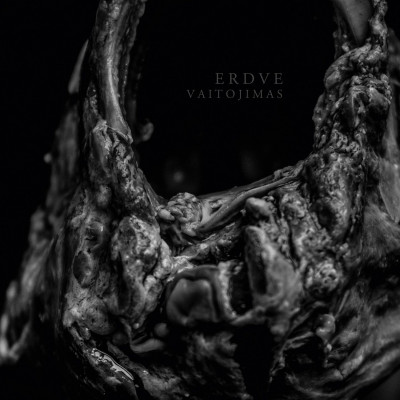 Season of Mist have gone out on a limb here. A debut record from a band who haven’t even toured the European landmass they hail from, song titles given and lyrics screamed in their native Lithuanian tongue and not even a comparably large social media presence for a local band. Picked up out of the demo pile (and on cassette, no less), Erdve were discovered, signed and propelled into the international ‘limelight’ of underground metal in the blink of an eye. Cool story, right? Proving that the old school approach of sending out demos can still pay dividends, and that if you’ve got the talent it doesn’t matter where you hail from or how obscure your internet presence is. But does their debut deliver, given that hyped introduction?

A resounding ‘YES!’, echoes throughout the infernal halls of metal. Erdve might just be my latest crush because Vaitojimas is so utterly crushing.

Not to be too hung up about their background, let’s just quickly investigate the title of the album, which also gives itself to its opening salvo. ‘Vaitojimas’ is a rather specific word in Lithuanian which means incomprehensible moaning, rather like the Platonic mental institution you envision in your mind, culled as it is from One Flew Over the Cuckoo’s Nest and documentaries on English Victorian ‘madhouses’. Split into six tracks, running at under forty minutes, the album is clearly meant to be listened to as a whole, and when one does that you can understand that the peaks and troughs the band traverse are an eerie metaphor for a deranged mind.

Perhaps the frenetic power and technicality of bands such as Car Bomb or Pyrrhon would come to mind for that more than Erdve at first, but with their sludge edge, the Lithuanians also bring about a growing sense of weariness and ennui to their sound. That, obviously, sounds like a negative, but I only mean it in the sense of metaphor. There is an often-overlooked side of mental health – it can be quite destructively, disastrously exhausting. So, rather than the flailing of limbs and gnashing of teeth, Vaitojimas is the soundtrack to the long stare out the dusty, rain streaked window, mumbling to oneself of a memory or idea lost but wrestling in the back of the mind forever more.

Just in case I haven’t signposted this enough, Erdve don’t deal in the light. In fact, whereas acts such as Amenra deal directly with the dark but manage with their euphoric cathartic bursts to reach some kind of revelation, Erdve is settled in the murk. There’s no redemption here, I feel. Just forever caught in constant spinning wheel of chance – a moment of clarity only to be swamped by the fog of confusion and doubt, once again. There’s a lighthouse beam out there, briefly glimpsed, but by god you know you’re wrecking against the rocks. No hope.

Completely recorded, mixed and mastered by the band, with even the artwork and layouts done in house, Erdve really are a band to admire. As previously mentioned Vaitojimas is comprised of six tracks – ‘Vaitojimas’, ‘Išnara’, ‘Prievarta’, ‘Apverktis’, ‘Pilnatvė’ and ‘Atraja’ – and runs as a unified whole. Blending a mix of sludge with other elements such as hardcore and with a small but no insignificant inflection of black metal, the album really doesn’t sound like a debut at all. It came as no surprise then, reading the PR sheet, that the members have been in numerous previous bands, the experience of which has clearly contributed to honing their current sound. What left a greater impression on me was that none of these bands registered on my radar whatsoever. Two things are for sure here. Firstly, Erdve are a name to watch out for in the future, and secondly, we should all immediately move our attention to the Baltic states; there’s a scene out there that remains largely untouched by even the most specific and exploratory blogs on the net.

One thing I have noted from a little investigation on social media is that Erdve haven’t really played live much at all, and haven’t stepped out of their home city, the capital of Lithuania, Vilnius yet. I do hope that Season of Mist can continue to support them, above and beyond the album release, and get Erdve around Europe soon (and eventually further afield). There have been many a band who have shown promise like this early on, and even a few who have found a label and released debuts to acclaim, but who disappear without a trace without so much as an explanation. I dearly hope this isn’t Erdve’s fate.  2017 was a big year for them, let’s hope 2018 is even bigger. Get touring guys.  I know that I, for one, will be waiting for you down the front.