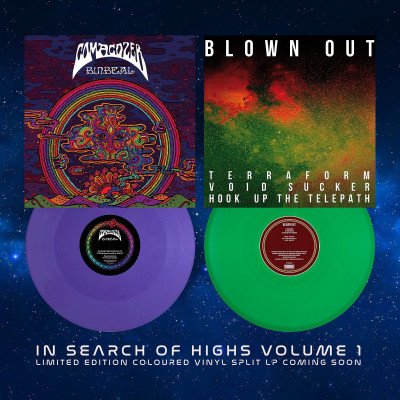 In Search Of Highs Volume 1 by Blown Out and Comacozer

In what looks to be the first in a new series of split releases from the ever excellent Riot Season label, In Search Of Highs Volume 1 takes two underground space rock giants, and puts them against each other in an attempt to change time, space, and your mind. At least that’s what it feels like, as both Blown Out and Comacozer deliver a masterclass in fucked up lysergic rock. Deep, intense, and probably spiritual somewhere along the line, this ain’t for the fainthearted.

Unusually for Blown Out, they use the space to deliver three shorter slabs of psychedelic goodness, rather than their usual expansive trips. The repetitive riffs remain, as does the full on wall of sound displacement that they have become such masters at. They sound much more raw here though, as if you are standing next to them in the studio, which adds to the short, sharp shock to the synapses. In place of the zoned out mind is a speed fuelled intensity.

‘Void Sucker’ is the highlight of the three tracks, where they build on a sub-Hawkwind riff to reach what can only be described as ecstatic highs. For all their “rooted in the garage” feel, they still manage to throw you completely out into space. The very reason they are one of the best space rock bands around is that they recognise the certain chord changes, riffs and repetitions that cause such loss of normal awareness. Magnificent as always.

Just as good is the lengthier ‘Binbeal’ from Comacozer. A much more chilled out affair, its dub inflected space bounces around inside your cranium like some niggling LSD trip, not quite letting you out of its grip. It’s a beautiful piece of music which demonstrates why the Aussie band are held in such high regard. They could have gone heavy, but instead opt for a more leisurely approach to offset the tumultuous sound of Blown Out. It makes for a satisfyingly high listen as the two opposing bands join in curious synergy.

Where this series of splits goes next, we will have to wait to see, but as a starter for ten it really doesn’t get much better than this. A release for the more hardened psych-head, it’s a release which provides both a satisfying high for older fans, whilst offering an easier way in for the initiated who don’t quite want to jump straight into one of their albums just yet. Either way, it does it’s job, and does it remarkably well.