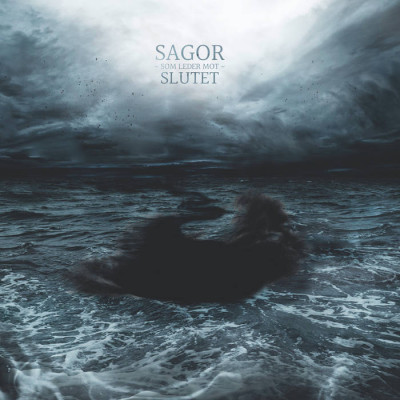 Sagor Som Leder Mot Slutet on the web:
Facebook | Bandcamp |
Release date: January 27, 2018
Label: Self-Released
by Mark Martins | February 17, 2018 | Reviews
Sagor Som Leder Mot Slutet‘s (Translates direction to “Stories that lead towards the end”) self-titled album was really well received by the Post Rock/Metal community. For several different reasons I either didn’t enjoy it or didn’t pay enough attention to it at the time. I stumbled across a new song for this new album, was willing to give it a go, clicked play and really enjoyed it. It got me really curious and somewhat pumped to listen to the whole album.
It also helped when I saw the album was mixed and mastered by Magnus Lindberg (samples, guitar, and engineering for Cult of Luna). It definitely sounds better and fuller than s/t.
II is composed of 6 songs and 44 minutes of intense Post Rock/Metal. I say intense as it takes us through so many different feelings. At times it can be cold, distant and depressive. Other times it embraces us in its warmth.
‘Avfard’ (Departure) is the first track and what a way to start other than a 10-minute introduction song. I love the progression and the building up right from the start and the ending with beautiful strings. Storm starts with strings the previous track ended with and suddenly into fierce blastbeat and then into something beautiful and intense. ‘Ovisshet’ (Uncertainty) starts off with a Cult of Luna vibe and slowly builds on the delicate melody and unfolds into immensity. Beautiful layered guitar work and melodies with all instruments steering in the same direction. One of the highlights.
‘Fyr’ (Lighthouse) works as the albums’, interlude. It brings back the strings, introduces tremolo in a very traditional Post Rock fashion. It feels like a glimmer of hope in the midst of all this turbulence.
‘Bylgja’ (Icelandic for Wave) has a beautiful melodic intro. The guitar effect that introduces the heavy riff is to die for. The tragedy/sadness it expresses is life-like. ‘Bottenlos’ (Bottomless) embodies pretty much lack of hope, defeat, desperation, and hopelessness.
II is devastatingly beautiful. Sagor Som Leder Mot Slutet know very well how to translate feelings into melody. If we list the translations to the song titles: Departure, Storm, Uncertainty, Lighthouse, Wave, Bottomless, II is telling us a story and not one that has ended well but is a beautiful one nonetheless. As their name suggests “stories that lead towards the end”. Does “the end” mean the end of it all?